Ladies and gentlemen, meringue aliens and hypoglycaemics, here is the second of two macaron review articles. It’s time we visited the home of the macaron de Paris, alas frequently called ‘French macaroons’. The macarons de Paris de Paris are plentiful and pricey, and not always superdooper (but mostly miles better than those currently found in Melbourne).

If all goes to plan, this will be my last article about macarons for a while. I can hear some of you sigh with relief! And there are others in Melbourne who are honing their skills as we speak…

I ventured forth with Harry, my Parisian correspondent. We had a list of seven establishments to visit in one day.

First stop, Fauchon on Rue Saint-Antoine, near the Bastille. Shock! Fauchon had morphed into Lenôtre. A notch or two more stylish. The array of cakes was as tempting as a Brazilian gigolo on a dancefloor, but we maintained our discipline and only dribbled on the macaron cabinet.

Discipline was also needed in the number of macarons to be purchased per shop. With seven venues plotted on our macaron-crawl map, the danger of billiousness was considerable. 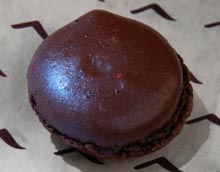 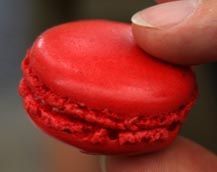 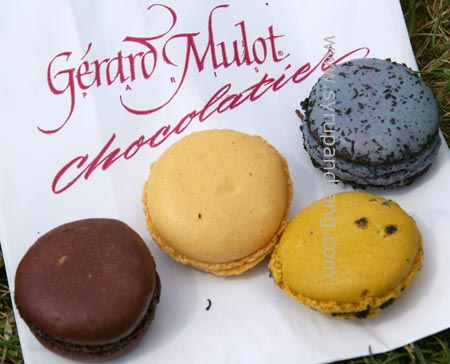 Next stop, Pain de Sucre, one of Paris’s most impressive small patisserie-boulangeries (I wrote about them last year). We resisted the wild strawberry tarts, the lime curd, the bread, the marshmallows… 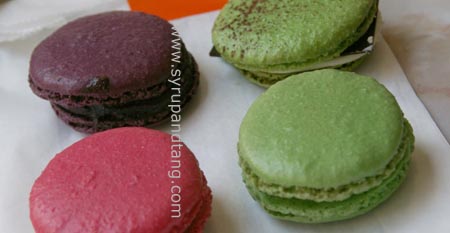 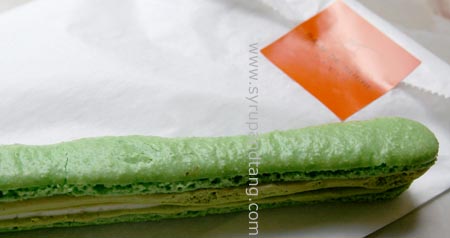 In a break from tradition, Harry was permitted to choose a special, elongated macaron. The rather green, onomatopoeically named Krac-Krac (EUR 4.50) was about 15cm long, contained a green tea butter cream, a long sliver of white chocolate, and… pop-rocks. Lots of fun, but no flavour was particular assertive. Rather expensive.

Cassis – blackcurrant, discreet
Griotte-pistache – cherry shells with pistachio filling, interesting and complex
Menthe-chocolat – spearmint with a chocolate wafer, pleasant, delicate, but not exciting
Angélique-chèvre – angelica shell with goat’s cheese cream, unusual in that it’s a savoury macaron. An interesting experience, but probably not one I’d repeat.

In stark contrast to last year’s visit, this round of Pain de Sucre’s macarons were coarse and irregularly shaped. Disappointing. EUR 68/kg or 1.30 each.

At this point, just three stops into our research, neither of us was feeling particularly enthusiastic. Our tummies were filling with almond meringue and fatty fillings. We hadn’t yet exclaimed in joy about anything. Hmmm. 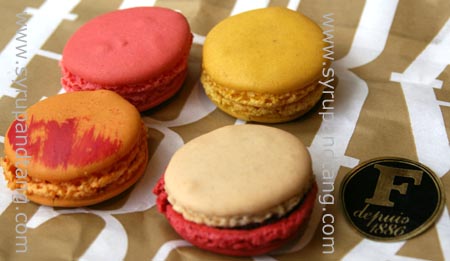 We weren’t impressed with the texture of these macarons. I suspected they weren’t fresh, as the shells were too soft. They also had dull surfaces and the fillings seemed too damp (perhaps contributing to the un-fresh impression).

Sadaharu AOKI is our fifth stop. 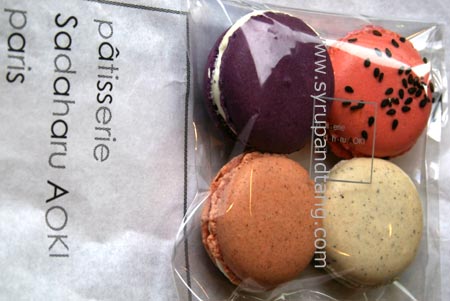 Aoki’s macarons were the smallest of all that we bought, but only by a few millimetres. They were also the cheapest, at EUR 0.85, despite being the most creative. These were the first macarons of the day to use a rich buttercream in all flavours.

At this point we surrendered from exhaustion and blood sugar crises. The last two stops would have to wait til the morrow.

Ladurée is lucky number six. We arrived a little late. At 1pm the queue consisted of about fifteen people outside the shop and considerably more inside. It was raining. As luck would have it, a member of staff enticed us to another entrance, leading into the salon de thé, where we could buy some macarons away from the surging crowd in the shop. 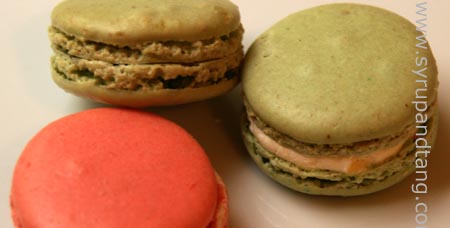 Muguet – lily-of-the-valley, a new flavour for me, strongly floral, but not as assertive as rose (Harry hated it)
Rosanis – a subtle combination of rose and anise, very pleasant but could have been stronger
Citron – outstanding lemon (it was a special type, but I didn’t catch its full name in either French or English)

The rain continued. The queue outside stretched a short distance, perhaps ten people. On many Saturdays the queue is much much much longer. Only the hardiest devotees could withstand the rain. These devotees were about 80% tourists, most of them American. After quite some time huddling under our umbrella, we could at last cross the threshold. The boutique seemed brighter than I remember it. Most interestingly, the staff were markedly more friendly than on my last visits, two and three years ago. A sign of the dominance of the tourist trade and the need to present a warm face? My first visit to Pierre Hermé was marked by stiff hauteur. What a change. 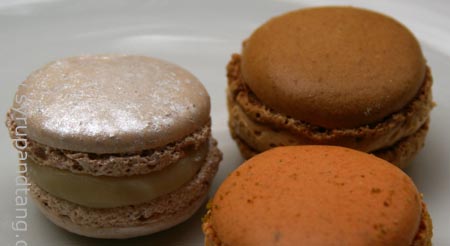 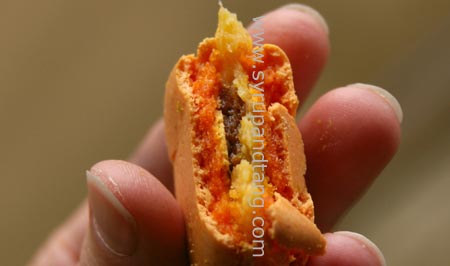 We also bought an Ispahan, a tarte au citron and a tarte au café. Heaven. Pics can be found in my birthday deliciousness post.

There ends the crawl through the macaronic universe of Paris. To round up, prices ranged from EUR 0.80 to 1.85 (A$1.50-3.40) per piece — close to EUR 100 per kilo at the top end. For comparison, the typical Parisian bakery price is approximately EUR 40/kg (probably less than EUR 1.00 per piece), while an upmarket foodhall like the Grande Epicerie at Bon Marché charges EUR 60/kg.

There was absolutely no question in our minds about who does macarons worth travelling for. Ladurée and Pierre Hermé stand heads above everyone except, probably, Aoki. The three have in common that they often use rich (but not heavy) buttercreams, appear to have thought more about the success of flavours, showed product quality and consistency across their ranges and, most importantly, were the only ones which we felt we wanted to return to. The amount of filling varies from place to place, but Hermé and sometimes Ladurée clearly prefer more filling. I’ve even read a blogger criticise Hermé for having too much filling (I forget who, alas), but I must disagree. I definitely favour fat macs.

The crucial lesson learnt. You can joyfully make yourself ill on good ones, but