Regular readers of these pages are very familiar with my obsession with Parisian macarons. Although I’ve recounted my baking traumas and occasional joys, described in considerable detail ways of making macarons and the hazards to psychological health, and told of encounters with the products of many Parisian patisseries, I haven’t done any product reviews. Things are changing!

This, ladies and gentlemen, meringue aliens and hypoglycaemics, is the first of two macaron review articles. This one is local.

Here are the results of the Syrup & Tang jury. Pierre Hermé of Paris, douze points. Melbourne, null points. Oh, okay, six points. I’m sorry for cutting to the chase so quickly, but Melbourne’s macarons can be summed up as somewhere between middling and utter rubbish.

Before I continue, I must digress a little to address something up-to-the-minute: I’ve held off publishing this article because I knew there was also something coming in Epicure soon. You see, I was interviewed for it. Epicure had commissioned someone to write a piece about macarons. (Let’s put to one side that I’ve written for Epicure before and you’d think I might have been the obvious person to approach to actually write about macarons. No?) That article appeared today, Tuesday 17th June, and there is no mention of me. That’s a little odd, but I could grudgingly accept that if the article were factually okay. I’d like to correct a few points:

‘a macaroon, a close relative of the meringue’ — the standard concept of a macaroon has little relation to a meringue. There is no similarity in the key processes. That’s why the common macaroon and the macaron are quite different beasts.

‘Macaroon purists insist the French petit four is called a “macaron”‘ — macaron purists do, perhaps. But they also know the difference between Italian almond macaroons, coconut macaroons and the Parisian style of macaroon. The latter is often called a ‘macaron’ for preference, so as to reduce the confusion which arises (or is spread).

‘the macaro(o)n, which dates back to the late 17th century’ — Rubbish. The Parisian macaron in its familiar form is less than 100 years old. It’s appearance in the film Marie Antoinette provoked derision because it was historically impossible.

‘”If I had a shop in Paris I would only sell macarons,” says [Laurent] Boillon, who first sold macarons in Australia in 1993’ — okay, but maybe he should read the review below beforehand. (Not the journalist’s fault.)

I could write more, but hey, I don’t get paid for it!

Now, back to Melbourne’s macarons. Let’s start at the bottom of the barrel and work our way up.

Laurent. Or perhaps more precisely Laurent Boulangerie Patisserie. I’d seen their macarons. Frequently misshapen. Sometimes for sale despite being broken and mutated. I am not exaggerating. Indeed, I regret not having had a camera on me when I saw the pitiful display at their Glenferrie Road shop. Macarons that should have been given away free or trashed.

Still, I try to have an open mind. Malvern correspondent, Josh (formerly of the Expanding Man blog), and I sat down to, um, consider the macarons at the Laurent shop in Albert Park. There were five flavours on hand. The macarons were flat and dull, with flat frilled feet extending outwards from the colourful shells. There was no visible filling. 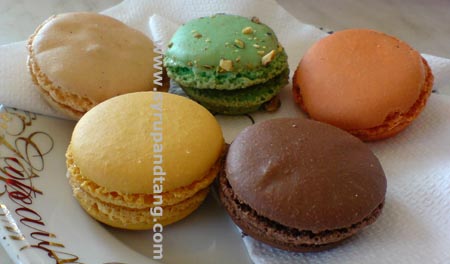 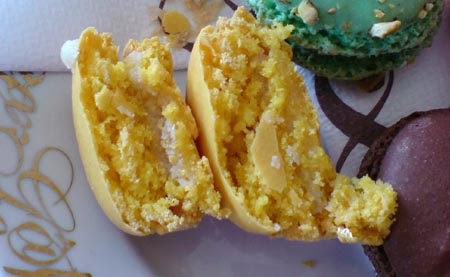 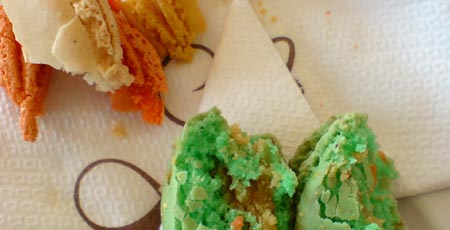 Leftovers. We didn’t want them!

Deep inside the macarons we discovered what seemed to be a marzipan paste. In all(?) of them. Regardless of flavour. A flavoured paste for each one. A modest, thick dollop, insufficient to reach the edges of the macaron. They were very chewy. We didn’t want to finish them. Flavours were unremarkable and the pistachio seemed to have been pepped up with a strong dose of almond essence. As ‘rustic’ almond macaroons of some sort, these might pass muster. As macarons, they’re pitiful, based on what we were able to purchase. Would we cross the road to buy one? Hell no! They could throw them at me and I’d swat them away. Josh was even more scathing. Shame, Laurent.

Next on the list is Baker D.Chirico, perhaps Melbourne’s most successful artisan baker. Alas, the macarons, though miles better than Laurent’s, aren’t great. Flavours were unnuanced. The shells were okay, but texturally less-than-perfect, and with spread feet. Would we cross the road to buy one? Nup. But others might. 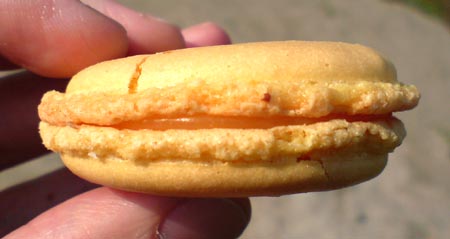 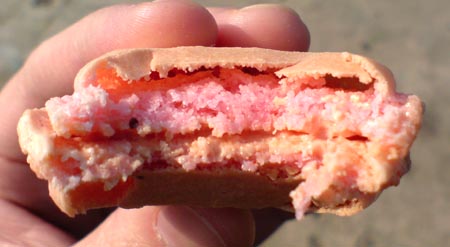 Some were broken or hollow. Many weren’t.

We headed for Noîsette in Port Melbourne (yet another Melbourne establishment with an erroneous and irrelevant cîrcûmflêx în îts nâme), mentioned very positively by Stickyfingers in comments previously. No macarons. ‘When does he make them?’ ‘Oh when he feels like it.’ Fine. I attempted a follow-up visit six weeks later, but had the prescience to call in advance.

Me: Do you have any macarons today?
Them: What do you mean?
Me: Do you have any French macarons today? Last time I came past you didn’t have any.
Them: Which ones? Do you mean the meringues?
Me: Maybe. I mean the French almond macarons sandwiched together with a filling.
Them: Oh no, don’t have any.
Me: Can you tell me when you’ll have some?
Them: Hang on. … Oh, they’re only making them to order now.

Onwards to La Tropézienne in Glenferrie Road, Hawthorn. The owner, Guillaume, left a comment recently in one of my macaron articles. 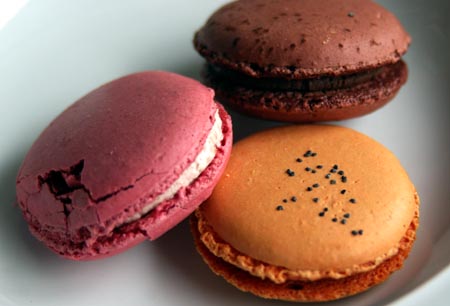 Macarons from La Tropézienne, June 2008. (Note that the broken shell was my fault.)

I first tried his macarons back in November. They looked great, but the shells had been left to crust for a long time before baking and were thick and too crisp. The filling was a heavy buttercream, weakly flavoured. The second visit, a fortnight ago, saw macarons which looked less attractive (see above — not quite within Parisian standards). The flavours were interesting on paper (orange caramel, raspberry, chocolate), but while the chocolate was a pleasant ganache and the orange caramel was strongly flavoured, the raspberry was an underflavoured buttercream. Disappointingly, the macarons didn’t appear to be fresh. The shells were almost soft (offering no resistance at all) which indicates humidity or staleness. The potential is there for a good product, but with such variation between November and June, I don’t know if they are achieving a consistent product. Would I cross the road to buy one? No. Other people do and should when the macarons are fresh.

And finally, my almond-crunchy friends, it’s time for Vue de Monde. Yes, Melbourne’s most written about French restaurant brand sells macarons in their Café Vue. At least, that’s what I’d been told. I sent my sister on a purchasing mission.

When my sister returned she was told that the pistachio ones hadn’t worked (alarm bell number one) but there were chocolate and orange ones. She bought two for me.

My sis hefted a large red box to the rendezvous point. Inside were two mammoth, weighty macarons. I looked inside. The surface of the shells was porous (alarm bell 2) and uneven (alarm bell 3). These are being sold as macarons? (no, sorry, ‘macarooooons’) 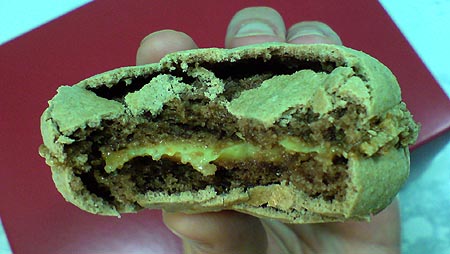 Vue de Monde’s macarons are very heavy. As a snack, they’re very rich and filling, possibly overly so! They’re quite tasty. I’d buy them as a weird sort of cake. There’s nothing wrong with the diameter — large macarons are common in France — it’s their tenuous resemblance to a good macaron which disturbs me. At A$3 they’re a good deal, especially compared to the crap brownies you can buy for the same price or more elsewhere. But as macarons, no. Would I cross the road to buy one? Possibly, if I felt like cake.

The shell was thick and crunchy. These babies had been left to crust for hours, perhaps a day. The fact that piping marks were clearly visible indicates the batter was too thick or otherwise flawed (and might never work for a real macaron). And despite the crust and thickness, one shell still showed a fissure.

I don’t know if this was an aberration, not having seen other exemplars, but given the multiple problems, I wonder if they know what the product should actually be like. Permit me to assist: 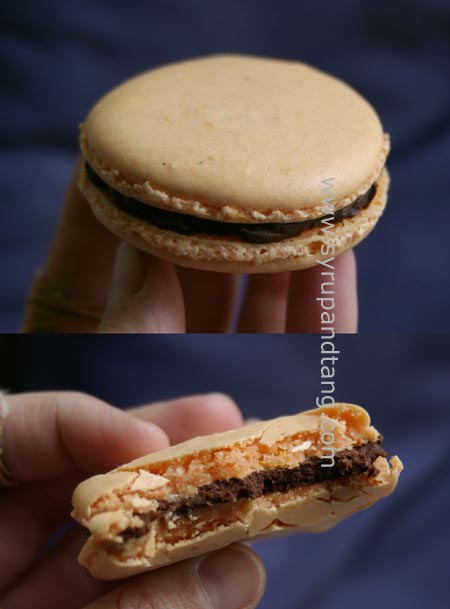 Making macarons isn’t easy, especially for home cooks. But it isn’t horrendously difficult for pastry chefs working in professional kitchens. I doubt that Melbourne lacks the talent, so I’m left wondering if some of these businesses are content to assume that punters will still buy mediocrity for lack of an immediate comparison. Excuse my cynicism.

For the closest thing to a serious macaron, go to La Tropézienne. For an entertaining, crunchy, rich cakey thing, go to Vue de Monde.

(Thanks to Josh for planning the first part of the macaron crawl!)

90 thoughts on “Melbourne’s not so great macarons, plus rubbish in Epicure”