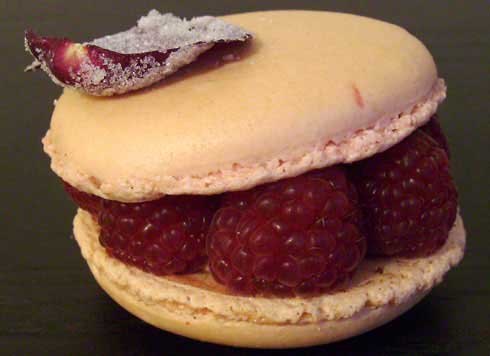 This is the first article in a special series about one of the world’s favourite petit fours. Two delicate almond meringue domes are sandwiched together with a flavoured filling to become le macaron.

Macaron. Note the spelling. Not macaroon. Note the spelling. I am a snobby Francophile pedant. Normally I spit on linguistic affectation (except for humorous effect, bien sûr), but when it comes to my beloved macarons, no ‘o’ shall interlope. Macaroooons can designate heavy, almondy, nay perhaps coconutty, creations which have their place in the world but most often pale into proletarian insigcookieness next to a macaronic beauty. The macaron is the diva of the biscuit baking universe.

Diva? It’s just bakedgoods. Indeed, but such a fickle, frustrating, fabulous good! While the eater may delight in flavour, texture and the creator’s artistry, the same creator must often experience heightened blood-pressure and many wasted egg whites.

If you haven’t yet experienced the world of the macaron, I present here an analysis of this shapely beauty. 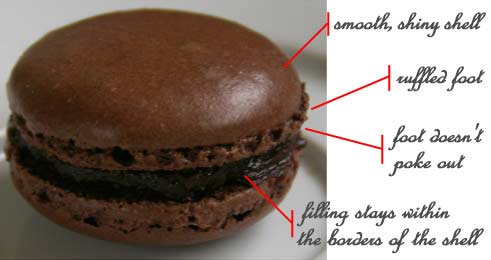 Within the shell is soft — not wet — almond meringue. When you bite into the delicate shell, it gives way with the slightest crunch and compresses to yield a mouthful of delicate, rapidly dissolving meringue and filling.

Macarons come in approximately three sizes: tiny 2-3 cm (often restaurant petit fours), small 3-5 cm (most popular, also referred to as gerbets), and large/standard 5-8 cm. You can go larger, but then you’re making gâteaux! The smaller sizes are filled with various flavoured creams or other fillings, while the larger often include pieces of fruit, jellies or other firmer elements and decorations.

For Parisians, the French and the travelling rich, the macaron de Paris has been a familiar friend for many a year. The Parisian salon de thé (tea salon) Ladurée claims this macaron as its own, attributing its invention to Pierre Desfontaines in the early 20th century (although there are many other macarons in France, it seems that none resemble the smooth, delicate, fragrant beauty of Desfontaines’s creation).

What path the proto-macaron took to reach its apogee is hard to establish. The Larousse Gastronomique (1996) pays them no heed. Culinaria France (1998) mentions them only in passing, as caterers’ petit fours. It’s as if no-one cared about them until the turn of this century when, suddenly, pâtissiers like Pierre Hermé gained renown as very special culinary artists (I believe he is also responsible for the food-in-glasses phenomenon which is all the rage in France but, thankfully, doesn’t seem to have spread). American writer Dorie Greenspan also attributes the macaronic wave to Hermé (read here).

Hermé’s small, sleek boutique on rue Bonaparte (6th arrondissement) is home to perhaps the most revered meringues on the planet. Queues snake out the door on Saturdays as connoisseurs (and others) wait to try Hermé’s latest flavours or to taste his famous Ispahan (a rose macaron with rose/lychee cream and raspberry jelly). Some of his creations are displayed and described by Fanny at the wonderful Foodbeam blog.

If Hermé is the artist, Ladurée is the classic purveyor. Located closer to the upmarket hotels and monied arrondissements of the Right Bank, here the queues seem to grow longer and longer every spring. Recent reports told of American tourists (and it really does seem to be mostly them) queuing 100 metres down rue Royale (8th arrondissement). Sensible Parisians probably flee to one of Ladurée’s other salons or other excellent purveyors. In fact, there are so many macarons to be seen in pâtissiers’ windows that I feel a recurring sense of trepidation that saturation point will be reached and, like the fickle batter they start out as, they will vanish, supplanted by something less stylish, less delicate, less diva.

Already, the proliferation of macarons has produced many a poor imitator. It pains my heart to throw one in the bin, but there has been cause. I was amazed at a window full of overcooked (brown!) macarons in a shop in Chartres, and have chewed my way through large macarons filled with hard, cold, greasy buttercream in both Paris and Melbourne. I’ve seen lumpy things sold for premium prices and have heard tell of a restaurant serving macarons filled with split crème pâtissière.

In the gourmet internet, English-language discussion of macarons commenced in late 2002. The mainstream media started writing about them. Guidebooks mentioned them. And, to my horror, Donna Hay magazine actually ran a small article and recipe in 2005, even though nary an Australian had yet seen these little divas in situ. As time has passed, they’ve popped up as tiny petit fours in fine-dining restaurants in Sydney and Melbourne and, slowly but surely, in Francophile pâtisseries. The decreasingly impressive Laurent boulangerie chain has sold macarons for at least a few years, but a recent visit revealed a display of garishly coloured, misshapen, broken mistakes. Other places do a much better job. Nowadays, with the grands maîtres of the macarons having boutiques in many Asian metropoles, you don’t have to travel far to see what the hype is about (and oh how the Japanese and Singaporeans have taken to them!).

I haven’t yet met someone who would poo-poo the macaron, though certainly some are shocked by their sweetness and may experience saccharine traumas at the hands of poor bakers. Of greatest interest for me has been the phenomenon of homecooks attempting macarons without ever having experienced the original. It goes against the modern trend of people only working from recipes for dishes they’ve already experienced (though this is not the case with many online cybernauts), and shows the strength of public enthusiasm for these little gems. The experimentation is wonderful but in, for me, a rare moment of anti-experimentation, I have to say that some of the marathon discussions to be found on the internet suffer from the fact that the cooks needed to know what the final goal really was. Macarons are tricky creatures and knowing the final goal gives a better sense of when things are going awry. (No other dish comes to mind as a parallel case right now.)

So here we have it; the scene is set. If you want to make some yourself, I’ll attempt to guide you through the process. Stock up now on egg whites, almond meal and icing sugar. You’ll need a kitchen machine or a good electric beater, a high-speed food-processor or a coffee grinder, and it would be wise to have good kitchen scales and a probe or sugar thermometer.

57 thoughts on “La Macaronicité 1: an introduction to the macaron”