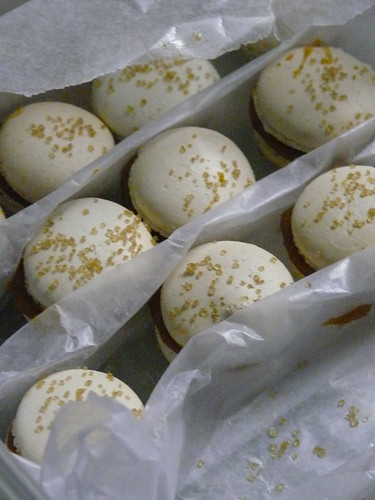 Last night (12 Nov) saw a get-together of some of the Melbourne foodblogging population. What a lovely bunch! I arrived late due to work commitments, so a good deal of the savoury edibilia had already been lifted from the long long table of goodies which people had (mostly) cooked up. The pics (from other bloggers) show all the stuff I missed and one or two that I actually got to sample. It was great to put names and faces to the people behind Eating with Jack, Deep Dish Dreams, The Day of the Expanding Man, Melbourne Gastronome, A Goddess in the Kitchen, Where’s the Beef, Vida, Get Real!, 1001 Dinners 1001 Nights, Ned-with-impending-blog and numerous others who I didn’t get to do more than smile at.

My own contribution to the long long table of goodies was a box of salted caramel macarons (macarons being a type of almond meringue, properly known as macarons de Paris, with two discs sandwiching a creamy filling of any flavour you might like). The photo is, alas, not mine, but sourced from the photos others took of the Bloggers’ Banquet.