Some wonderful internet services rely on so-called ‘intelligent systems’ to keep you interested and stimulated. They guess your preferences, guide your choices, point you towards new (and lucrative) potential purchases. Perhaps the most famous such system is TiVo. Unknown in Australia except by technogeeks, TiVo is a US device that predicts which programs you will want to watch on telly. You tell it what you like (or don’t) and lo! your diet of CSI and Alias spreads like a crimewave. Your TiVo personal digital video recorder saves every imaginable analytical crime series that your 300 channels can throw at you. Your partner suffers nightmares for months thereafter.

If telly isn’t your thing, how about intelligent audio streaming? A service like Pandora lets you customise ‘stations’ of musical styles, and as the reasonably-empowered listener, you get to tell Pandora what you feel about each song it plays. It will even tell you why it chose a particular song for you. Very bright! You can discover that an affection for Santana’s Maria Maria goes hand in hand with an attraction to Craig ‘how-many-times-can-I-mention-my-name’ David. Or that loving John Paul Young’s Love is in the Air (which I do) makes you a candidate listener of Roger Wakefield. Wrong wrong wrong. Although opening Pandora’s box can cause a few surprises, you can at least berate Pandora by telling it not to play that awful track again! Nonetheless, I find myself unable to train the dear gal to play music which I regard as in some way genre-sharing with Savage Garden. Chris de Berg? Gimme a break.

TiVo is said to be a little harder to control than Pandora. If you dislike cowboy movies, there is anecdotal evidence that you might face a barage of arthouse films and a dancepartyness of Queer As Folk episodes. Realigning one’s sexual orientation with TiVo might be some sinister social experiment, but the ‘intelligence’ in the system clearly doesn’t understand that not every straight boy aspires to be John Wayne. The amusing or dissonant effect of this sort of ‘recommender system’ (as they’re called in the trade) was first highlighted in an article by Jeffrey Zaslow in the Wall Street Journal in 2002 and has become quite famous.

Notwithstanding my minor tussles with Pandora, I haven’t had to contend with any serious distorting effects of a recommender system. Until yesterday.

The good news? This affliction probably isn’t permanent. Because I know the culprit. It’s Jamie Oliver. All I had done was give a ranking to his new tome (Cook with Jamie). Suddenly I’m meant to want a book about why penguins’ feet don’t freeze. Amazon suggests I buy Ian Rankin and John Grisham too. Ha! The only near-hit is Richard Dawkins’s The God Delusion. And then there’s that book by Mrs Beckham. If it were one written by her hubbie I’d be camping out front of my local bookshop in an instant.

So, Jamie has buggered up my Amazon recommendations. I’m not talking about the ‘Customers who bought this item also bought’ section. Amazon customers can also view a ‘Recommendations for you’ page that develops as a result of your previous purchases, views and wishlist. Should I unrate Jamie? I might yet want to buy a Jamie book at some point (there is, however, no historical precedent). I faced a similar dilemma when a high rating of Peter Reinhart’s The Bread Baker’s Apprentice resulted in a few too-hands-on titles about building brick ovens and the like.

I should explain that I use Amazon almost exclusively to surf the food/cooking category. It’s a great way to keep abreast of new books (sometimes slow to reach Terra Australis), find old or unexpectedly interesting tomes, or even to buy the occasional item. Who’d have guessed? Anyway, the effect of surfing within a limited domain is that the recommendations are usually fairly acceptable. Sometimes Amazon gets a little too enthusiastic about Japanese or Persian cooking, but I can deal with it, and there was once a nasty incident when I told it I owned a book on butchery, but we won’t go there.

I’ve been looking a little more closely at the recommendations. The situation seems quite grave. A few deviant food books have also crept in. Apparently Allegra’s Colour Cookbook, Sophie Conran’s Pies and Mary Berry’s Christmas Collection are worthy of my attention. Is there happyjuice in my cordial? This isn’t Jamie’s fault.

An unlikely pair of culprits have been identified. On the one hand we have Bill Granger (Every Day). I knew there was something wrong when a guy can smile that much. And on the other is the Rose Bakery of Paris (Breakfast, Lunch and Tea). By rating these I’ve been thrown into the lifestyle end of the bookshop. I’m having visions of Donna Hay spinning spaghetti into neat little nests. Should I cook with Marie Claire? Is it time to redecorate? Do I need a makeover? If collaborative filtering (the process of predicting interests based on a range of people’s preference patterns) does this to me then I don’t want to be a team player!

Whether you’ve got £20 to spend in Top Shop or £2,000 to spend at Gucci, looking good isn’t about money, it’s about style, and style never goes out of fashion.

I wonder if the rest of Victoria’s book is as rich in insightful aphorisms. With a title more like a C-grade porno than a fashion aid, That Extra Half an Inch: Hair, Heels and Everything in Between (Hardcover) is not going to fulfil me culinarily. It strikes me that I’ve viewed the page for this masterpiece twice already and Amazon’s recommender system has no doubt recorded that fact for posterity. I expect the clever algorithms are now irreparably biased in pink. Am I doomed to How to Walk in High Heels: The Girl’s Guide to Everything when next I visit the ‘Recommendations for you’ page?

That Extra Half an Inch: Hair, Heels and Everything in Between (Hardcover)

How to Walk in High Heels: The Girl’s Guide to Everything

The bag of lemons stared at me. Days turned to weeks. They greeted me every morning with an admonishing, jaundiced glare. ‘Use us!’ Weeks turned to months. Gradually the glare turned to a grey and furry myopia. ‘Save us!’ cried the survivors, still resembling a primary colour, though showing not-so-premature signs of ageing.

Permit me a moment of immodesty: I’m a dab hand at lemon tart. And this seemed a suitable tribute to the bag of surviving citrus. I dithered over the best sacrificial form: creamy, well rounded, mellow and tangy lemon tart (as in so many Australian cafés), or eggy, curdy lemon tart (Ã la tarte au citron), with its characteristic intensity and flavour explosion?

My recipe search led me to an untried candidate: the tartelettes au citron in Camille Le Foll’s Modern French Classics (a brick of a book, nicely presented and not bad recipes). Happy to try a new variant on the theme, I unpacked the ingredients and prepared to weigh and measure.

I hate that. Really. Big lemons? Small lemons? Modest lemons? Gnarly lemons? Mine were small and past their prime. It seemed prudent to increase the arbitrary lemonicity to four. And I wasn’t scared of pushing the boundary of tang. A real zinger of a tart would be fun.

I made the curd, mixing happily, watching the syrup take on that yolky, glossy, slightly translucent character. I let it cool and tasted it. The curd was simultaneously sweet and strikingly sour. Not excessive, but by no means shy.

The pastry was rolled and shaped and rested. The tarts filled, baked and then removed from the oven, gently bubbling.

Tasting time approached. I decided to try Tart One au nature. Ka-bam! Not-shy had become oh-my-god-my-eyes-are-watering. I’m brave. A tart can’t slay me. It wasn’t unpleasant. It was bold. But after consuming about two thirds of it, I noticed a certain apprehension before each new mouthful. A mild burning could be felt in my throat. What monster had I created? 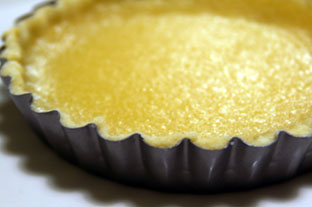 Frightened, but also a little proud, I shared my searingly sour tarts around. The victims were at times tougher than I, though most agreed that some whipped cream would be nice as an accompaniment. The recipe below should yield a distinctly tart tart, but as lemons vary, so will the acidity. If you are one of these sour-mouthed dessert lovers, you could experiment — but I’d strongly recommend following the quantities in this recipe for the first attempt.

There aren’t many restaurant reviewers who I trust to say clearly what they think without adding in a touch of egomania. Jay Rayner of the Observer is one of the ones I trust. He was the first serious reviewer I’d ever read who didn’t shy away from clear negative reviews, as well as good positive ones.

Why am I writing this? Because one of his most recent reviews is marvellous. Here are a few quotes from his review of London restaurant Suka from 29 April 2007.

Any attempt at conversation – ‘God I hate this place. How can they live with themselves,’ etc – kept being interrupted by waiters trudging off into the distance and back again
[…]
The one advantage of this set-up was that the waitress was so far away from me, and the music so loud, I couldn’t really hear her recitation of the menu’s ‘concept’.
[…]
Anyway, having eaten there, I can sum it up myself: ‘We are now going to extort as much money from you in as short a period as possible for as lacklustre a meal as we can get away with.’

UPDATE: I’m not alone in cyberspace when it comes to expressing respect for Jay Rayner. If you’re interested, take a look at what Silverbrow has to say.