Although I bake a lot (and not just small almond meringue things), I was finding I wasn’t trying enough new things from my piles of cookbooks. So I joined the Daring Bakers. I’m sure many of you will have seen mention of them before, and a frequent commenter here (Y of lemonpi in Sydney) has often posted about her participation in the Daring Baker Challenges (and she has this time too!). Each month there’s a new challenge which remains secret until the end of the month. Then, around the world, crazy bakers post pictures, text, recipes.

Embracing the first challenge I could participate in, I set about making it on the first weekend after the Daring Bakers were told what to make. Oh hell. A full gateau. I’ve made all sorts of fiddly things, but never a layered bloody gateau! And so it was time to learn.

A ‘Filbert Gateau with Praline Buttercream’ was the order of the month. In this case filbert refers to hazelnuts (a common synonym for some USAmericans, I believe), although technically a filbert isn’t quite the same thing as the everyday hazelnut. And praline is nuts and hard caramel ground to a powder or paste.

The cake was not a simple affair, consisting of:

And it took about nine hours to get it together. Thankfully, a lot of that was learning curve! 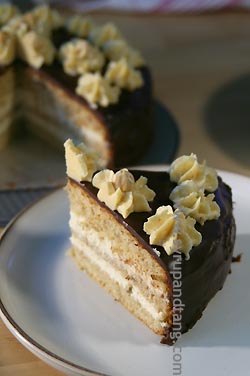 In each challenge there is a little latitude permitted for some elements. I halved the recipe, as I gain enough weight from my normal baking, and there are only so many people I can give cake to!

I’ve become a little sceptical about many of my American baking books in recent years, with many items coming out much too sweet for a non-American palate, so I decided to err on the side of caution in this case, omitting the buttercream from between the layers and instead just using it for the decoration. I mixed praline paste into the whipped cream, using this as the sole filling between the sponge layers. Funnily, the chocolate ganache was meant to be far from sweet, using chocolate with 70% cocoa solids. This looked like a disaster in richness to me, so I used a sweeter chocolate (about 60%). In fact, I think going sweeter would have worked even better.

The gateau came out pretty well for a first attempt at this sort of thing. My ganache wasn’t particularly neat, my piped buttercream looks horrendous, and choosing only to use flavoured whipped cream between the sponge layers meant the cake needed to rest about 48 hours before the best blending of flavours was achieved (because barely sweetened cream can be pretty flat). It was a great learning experience. I wouldn’t make this particular cake again, but wouldn’t hesitate to try other gateaux.

Just a reminder to anyone who has missed the news elsewhere — there’s a meeting of foodbloggers on Saturday 26 July in Abbotsford. All the details are over here. No need to bring food, so there’ll be no juggling of containers and less clicking of cameras. I’m looking forward to seeing many new and familiar faces!

The cauldron of ethical, responsible eating has been bubbling away for a while. Advocates of various issues throw in their own chunk of passion while others try to package this pot au feu in a pastry case, as if consumers could carry it around as a dish of good conscience. The thin broth and pieces of irreconcilable ethical directions make for an impossible dish. A lid of statements about correct lifestyles and how people should comport themselves when it comes to their food life leaves consumers in justifiable trepidation about what lies in this pie. All the while, the pie leaks its broth through the many fissures in the increasingly soggy pastry.

Many concerns about ethical eating and food/cooking knowledge have been receiving attention in the Australian blogosphere and some recent posts revealed both common goals and some tensions between the experiences of a diversity of bloggers and the broader eating population. [Purple Goddess: 1, Stickyfingers: 2, The Gobbler: 5, 6, 7 all contribute opinion, wisdom or personal experience (and the comments on their pieces are interesting too).] [UPDATE 27/07/08, 20:42: links 3&4 were removed as the person in question objected to being referred to in this article. They insisted that my reference to other bloggers here is insulting. That was not and is not my intention. I thought that linking to relevant posts by Australian bloggers would help readers to understand what SOLE is and what many of the issues arising are.]

Issues love advocates and advocates love bold statements. Consumers endure a number of conflicting causes that clamour for their support and most of these use a good dose of punitive rhetoric to make the consumer act.

A slightly exaggerated summary of the SOLE (sustainable, organic, local, ethical) or Ethicurean issues, plus a few more:

And we can add to this:

Most normal consumers haven’t a snowflake’s chance in hell of navigating these issues and chastisements successfully. When confronted with too many challenges people stop caring. Issue fatigue. You lose them. Many more intelligent consumers will also be lost if they can see that a cause is not as cut-and-dried as the campaigners choose to claim (GM, local, organic) — a situation often exploited cynically by reactionary opponents of ethical eating.

There has been valuable writing recently of how little it can cost to make great food and how unreasonably restaurants get away with charging a premium for simple dishes (see links in the second para). But what seems simple or absurd to one passionate commentator may be quite the opposite to another, and to the average consumer. It’s easy to forget Jo(e) Eater when writing about one’s passions for a largely likeminded food-enthusiastic people. Let’s remember what many cooks/eaters/diners are like:

Many people cannot cook very well because they:

People may choose not to cook because they:

Consumers shop largely/exclusively at supermarkets because they:

Many people do not convert to local or seasonal because they:

Consumers are so bombarded by scaremongering, warnings, confusing marketing and aggressive campaigning that they are lost. They are misled by TV cooks and food media that make out that expensive or fancy ingredients are necessary for the lifestyle self-image. They’re chastised for choosing shortcuts (‘cheats’) or fast food. They face more decisions on every level than is humanly manageable: issues, product choices, status validation.

And, increasingly, there’s the household budget to worry about, as petrol prices and food costs creep upwards. Fear, difficulty and helplessness will challenge the habits of a decade of food-as-status consumerism.

Now look at whether any of this applies to you. I know many people for whom the above would not apply at all, but their numbers are insignificant in comparison to the broader population’s understanding, fears, experiences, preferences or opportunities.

The passionate food world can encourage consumers to cook more, make wiser food and nutrition choices, and think more about what types and sources of food they could prefer. Encourage, not insult. Help, not cajole. (Thankfully this is another strength of many food blogs.) If we forget this, we just add to the noise, pushing Jo(e) Eater down the road of confusion, frustration and further manipulation by vested interests.

Last week saw the announcement of a significant increase in the minimum wage in Australia. The lowest paid workers will, from October 2008, receive a 4.15% pay rise, equivalent to 57 cents per normal working hour. Bang! Restaurateurs have been complaining about how this sort of increase would hit really hard and the flow-on would be large increases in costs to diners.

… on average their next main course will increase by $1.50 …

Restaurant and Catering Australia (site) whipped up a press release and the papers lapped it up without analysis [1, 2, 3].

… yesterday’s decision by the Australian Fair Pay Commission will cost his business up to an extra $50,000 a year, leaving him considering introducing weekend surcharges.

“Soon people are going to be paying $4.50 for a cup of coffee and wondering why,” he said.

This sounds almost as stupid as the incessant griping about the GST in the restaurant industry (now in place for eight years).

Why introduce weekend surcharges? The rise in costs affects every day of business. He doesn’t understand his own business model? And what’s with the cup of coffee? Mr Lavis thinks the result of a 4.15% pay rise for some people will cause a 29% increase in the price of a cappuccino? (I’m assuming a current $3.50 price.)

All employment factors (penalty rates, multiple employees, admin) are already built into a restaurant’s menu pricing. Restaurant and Catering Australia’s argument is solely about employment costs, so there would be no reason to assume that this pay increase could result in more than a 4.15% increase in menu prices (that’s $0.83 on a $20 main, say). And even then, they’re pretending that the menu price is entirely based on wage costs.

Amusingly, their complaints actually overlook the possible higher flow-on effects from their suppliers. Assuming produce is bought from low-wage suppliers, with one low-wage intermediary, the increase could hypothetically be as high as 8.3% (two layers of 4.15%) on food costs. But wait…

Reality is that not every supplier in the restaurant chain is subject to uniform application of the adjustment of the minimum wage. Only the lowest income employees are benefiting from the full increase, while those on an Australian Pay and Classification Scale benefit to a lesser extent. This means that for each layer of costs, the maximum cost increase is considerably less than 4.15%.

Have I missed anything?

The financial bottomline often leaves people in care exposed to inadequate catering and little gastronomic freedom. The Gobbler writes about the bleakness of the drive to minimise food costs and the discussion in the comments explores cost, taste and the future.

the bean-counters first stop is always the kitchen, as it seems the fattest target to put on a diet

George Biron over at Sunnybrae had a post about two weeks back about cassoulet. I like this quote:

Those of us who are looking for a definitive version of anything I am convinced are missing the point in cooking.

Wise man. And the discussion of cassoulet ingredients is good too.