All sorts of things grow when the weather is going crazy. In Paris this week, the temperature fluctuated between 14C and rainy and 35C and excruciatingly humid. I got home from a day of walking around the rive gauche (Left Bank = mix of university, studenty, somewhat wealthy, public service, cultural and dawdling tourist population). Look what had grown in my bag from the curious cultures floating through the air… 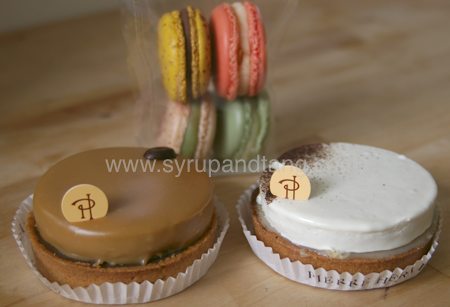 Then there was a bag of chocolates from Patrick Roger. 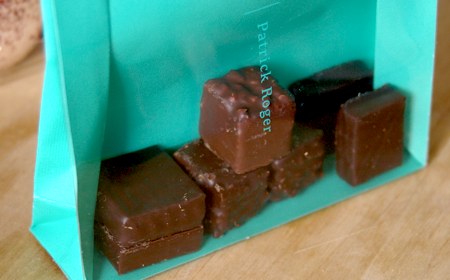 And much to my surprise, a bunch of caramels from the rather eccentric Denise Acabo. 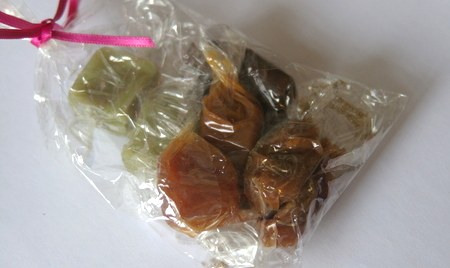 Plus some bags of handmade lollies from Fouquet, and read what David Lebovitz has to say. (EUR 14… who knew sugar could cost so much?!) 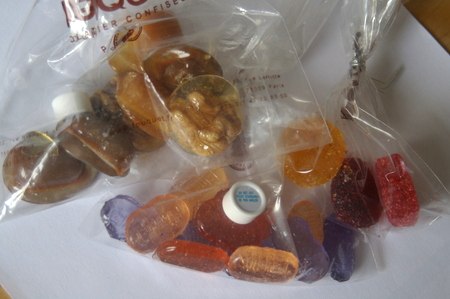 Not to mention the compensatory box of chocolates from Artisan du Chocolat in the letterbox. (Read why here. Oh look, no touching!) 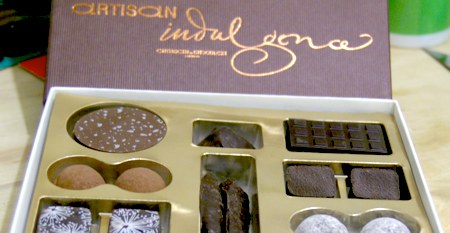 And I mustn’t forget a passing mention of confit de canard, the best crème brûlée I’ve ever had, two macarons from Ladurée (bergamote and fleur d’oranger) and (gasp!) an ice-cream from Berthillon (cacao extra bitter — like cold liquid chocolate, thym-citron (thyme-lemon) — beautifully tangy with some bitterness). Okay, none of those were in my bag. 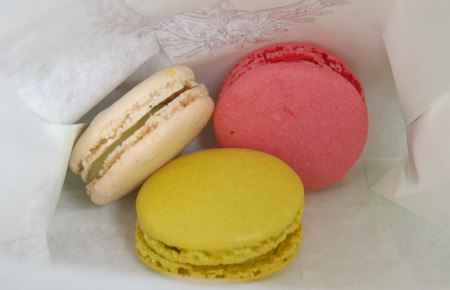 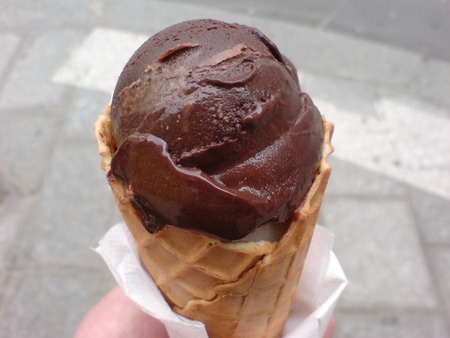 On days like this, you just wish apples or a light salad were easier to find 😉

I had intended to review some of the chocolates from the British chocolatier Artisan du Chocolat, as I was in London recently and had previously enjoyed (and written about) them after a visit in 2007. Some businesses in high-end food succeed in respecting customers, others choose to be rigid and deliberately unhelpful. Artisan du Chocolat seems on the face of it to fall into a more positive category, but on this visit I was disappointed.

Unable to make it to their Chelsea shop, I visited the outlet in Selfridges department store. Artisan du Chocolat staff are refreshingly generous with samples when a customer is exploring what to purchase (the range is large and the flavours are at times very interesting). My first sample was, I believe, a jasmine tea chocolate. Alas I found the flavour to be on the barely-present side of fleeting and I mentioned that the flavour was too mild for me. I was disappointed to receive in reply a vacuous “We only use natural ingredients, so the flavours are often very subtle.” I really loathe this sort of rubbish. Don’t take customers for idiots. I work with natural ingredients too and my palate is pretty good. While some aromas can be difficult to capture and preserve, a customer has good reason to expect a flavour label to correspond to an olfactory experience upon tasting a product.

I was polite in my disagreement and the assistant was helpful enough to tip me off (without prompting) about which flavours I should best avoid for their “subtlety”. Good.

And so it became time to make a selection for purchase. The chocolates are sold by weight, but can be packaged in fixed-weight boxes or in cellophane bags. I wanted a 200gm box to house my chosen chocolates (especially as I was travelling) and suddenly there was a problem. One product group in the company’s range is dusted in cocoa. I wasn’t allowed to have the cocoa-coated chocolates in the same box as the other products. Wasn’t allowed. They all cost the same by weight. They all fit in the box.

I asked why this wasn’t allowed. “The cocoa would get on the other items.” I explained that this didn’t concern me, but no, they couldn’t be combined. I suggested putting in a paper divider. No. My irritation began to show and the manager was consulted for a second opinion about whether I could have my box of chocolates. No. The other chocolates might get dirty. Gotta love this sort of ignore-the-customer’s-desire approach. Why couldn’t they just insert a piece of paper or wrap the cocoa coated chocolates in some way? “It’s company policy.” So the company doesn’t want me to risk dirtying the chocolates I wish to consume? “It’s company policy.” You’re afraid I’ll complain to someone about the cocoa on the non-dusted chocolates if they happen to rub together? Afraid I’ll come back and complain? “Sorry, sir.”

I don’t actually know why I proceeded to spend my money there. I guess the desire to try some new product briefly blinded me to just how bloody idiotic “company policy” and half-truths are. Unsurprisingly, the chocolates, in separate cellophane packages, didn’t survive travel well. Money ill spent. Thank you so much, Artisan du Chocolat. I now look forward to two weeks with Paris chocolatiers before flying home. At least in Paris I know which shops are relaxed and helpful and which are rigid or haughty, rather than having to navigate this British middle-road of spin answers and “company policy”.

All over Denmark you see signs for frisky creamy balls. At first it seems very odd and rather tasteless, until you realise you’re mistranslating. You see, friske flødeboller actually means fresh cream balls. A world of difference in the world of smutty word games. 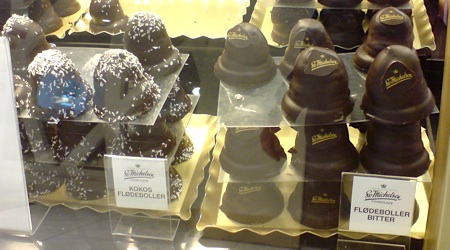 I’m in Denmark as I write this, sitting in a lovely IC3 train (the quiet section, stillezone) on my way from Copenhagen to Odense. A few weeks before leaving Australia for rather chilly (but delightfully sunny and springy) Scandinavia, I was inspired to make the aforementioned smut objects by the talented baker and cake decorator Sif of anarka.dk. Earlier this year she published a recipe for flødeboller and I knew that these creations just had to happen in my kitchen too.

As a child I had a perverse affection for the Rowntree’s (now Nestlé) Walnut Whip, largely restricted to the British Isles. Cheap and nasty milk chocolate encased a fluffy interior of a sort of artificial cream. Atop the Walnut Whip sat a walnut, slightly rancid and squeaky. Little has changed other than the price.

In my late teens I was exposed to the German Dickmann’s (Schokoküsse): domes of neutral fluff on a wafer base altogether covered in a thin layer of chocolate. These things can be found in various forms around the world, often having the rather unfortunate name of n-gger kisses, moor heads and the like. (Sorry for the self-censorship, but I can do without white supremacists finding this site!) They continue to exist with, thankfully, rather less old-fashioned names. Wikipedia’s English language article on these is pretty fun. 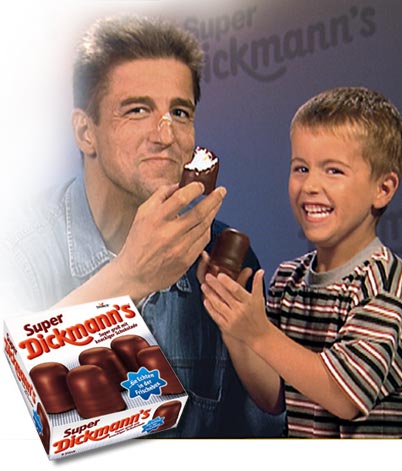 Flødeboller are fun or hell to make, depending on your perspective on meringue and chocolate coating. This is not a recipe for a humid or warm day. Here comes my account.

SIf’s original recipe uses dried marzipan discs (a marcipanbund) as the base, Swiss meringue for the filling and milk chocolate for the coating. I was giving my flødeboller as gifts over about 10 days so decided to use an effective method for pasteurising the egg whites at home: heated Italian meringue. During production I found that I had undercooked the marzipan bases a bit and that they soften too much over time (some manufacturers coat the marzipan completely in chocolate). I’m not sure if a shortcake or biscuit base might be a better option, especially for longer storage. Many recipes use a wafer base, but it’s not my preference. I feel you’d need a base which is fairly firm but not too crisp/crumbly.

With 200gm of marzipan, make discs 4-5mm thick and whatever diameter you prefer (I tried 5cm) or prepare biscuits/wafers of similar dimensions. If using marzipan, you’ll need to dry the discs in a 200C oven, being very careful not to burn them (Sif says less than 5mins). The discs are very soft until they have cooled.

I used approx 100gm egg white (about three egg whites) and 150gm sugar. In order to ensure home pasteurisation of the egg whites, I warmed the egg whites gently in a bowl over hot (approx 50C) water, then added hot sugar syrup.

When the egg whites form soft peaks, place the bowl on a flat surface and add the syrup while whisking at high speed until the meringue is very stiff. Allow to cool.

When the meringue is cool to the touch you can pipe it onto the discs, using whatever pattern/nozzle you prefer. You could flavour the entire batch of meringue, divide it into different bowls for different flavours, or add certain flavours after piping. The piped meringue should stand at room temperature for at least an hour or two so that the surface is fairly dry to the touch. 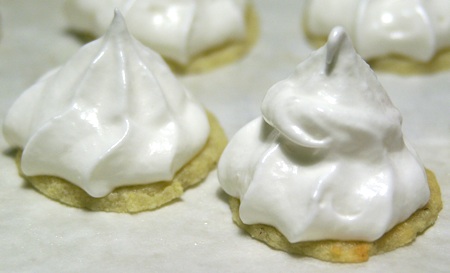 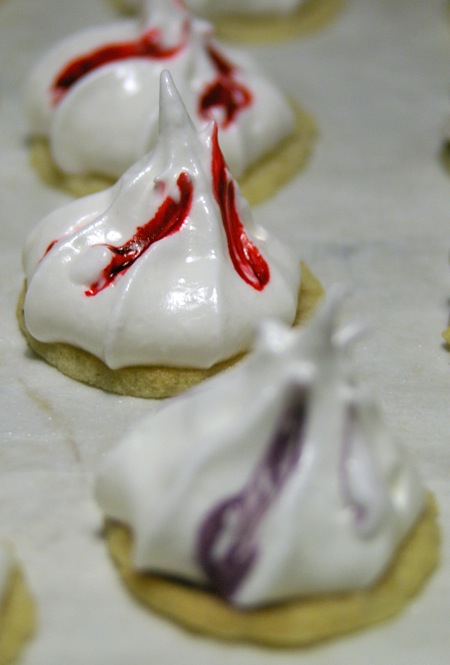 Gently melt about 200-250gm dark chocolate (I wouldn’t go over 60% cocoa). I suggest having a large pointed spoon and a small teaspoon to hand for coating the meringues. The discs with meringue should be placed on a thin wire drying rack. Place freezer plastic or baking paper underneath the rack (you’ll want to catch the chocolate that runs off so that it can be recycled). Let the chocolate cool to slightly warmer than skin temperature before coating the meringues (otherwise the meringue may soften a lot). 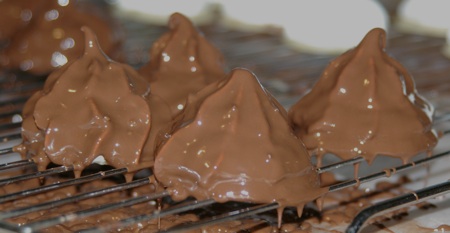 The chocolate will take a long time to harden. It is best to leave the flødeboller in a cool place for a number of hours. Then eat them all. 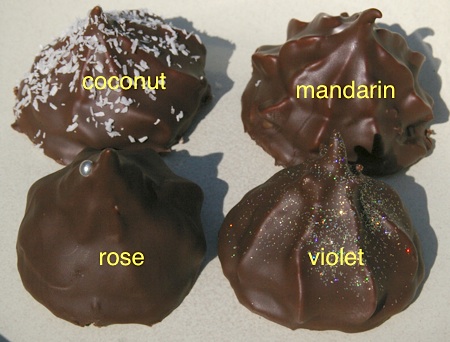 If you forget to eat some, make you sure you keep them in a sealed container in the fridge.

I’m sitting in the Qantas Business Lounge at Melbourne Airport. The food is designed to prepare you for the inflight experience. Actually, I think the food on my flight might end up being better. The “Malaysian Chicken Curry” is one of those thick-with-starch sweet curiously-moist-chicken affairs with lots of turmeric for effect. The rice is seriously overcooked broken (why?) long-grain rice. I’m glad I stopped at a tablespoon of each.

Dessert, meanwhile, was a firm-cream lemony hazelnut-daquoisey thing, exactly like those insipid creamy “cakes” you get inflight. It’s staring at me now.

And why would you have a wireless network in the lounge which is called “Telstra” rather than something relating to Qantas? At least the Malaysian Airlines wireless access is clearly labelled (and, incidentally, accessible for non-lounge travellers sitting at the gates, though the signal can be weak).

I’m off on a trip. Look out for strange reports of better food!

For the bakers among you, I have news of fresh yeast. Coles supermarkets (at least in Melbourne) are officially stocking fresh yeast again after a hiatus of three or four years. Rush out and buy buy buy so as to prove he sense of their decision. It would be interesting to know how many branches of Coles are actually getting it in.