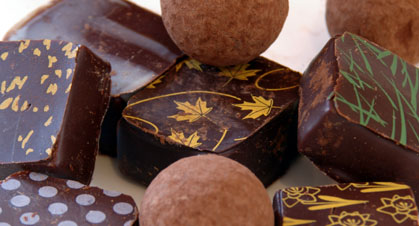 [This is the first article about travel. Others: London/UK, Paris.]

I was in the mood for cocoa bean product. I set off with a sheaf of addresses under my arm. Chocolate from here to eternity. Well, Melbourne to London, Paris and Lyon, more like. I knew there would be ups and downs; disappointments and cries of delight. I wasn't sure where (or if) I would find satisfaction.

This is the first instalment of my Chocolate 2007. What I ate in London. It wasn't all from London, but it was all English. Well, it was all sold by English producers.

Later instalments will cover other places, and I'll add links to those articles.

I do not pretend to have the experience and vocabulary to adequately analyse the flavour profiles of chocolates. Nonetheless, I have a good nose, eat a hell of a lot of chocolate, and endeavour to describe things in a way which gives some idea of why I like or dislike a product.

Last time I lived in London, people seemed to talk about Leonidas and Godiva at the luxury end, Charbonnel & Walker and Prestat too, and Thorntons as some sort of non-supermarket mid-range special thing. By 'people' I mean 'the general populace'. There might have been other purveyors. Indeed, The Chocolate Society has been around for over fifteen years. At that time, Charbonnel & Walker and Prestat were both beyond my means, while Thorntons was officially banned from my household because of the very sweet, gritty nature of many of its products. I don't consider British Cadbury to be chocolate in any meaningful sense (indeed, I'd rather eat my toenails), so I'll leave that there.

My London friends live, in 2007, around the corner from a new purveyor. Hotel Chocolat. Although I trust my friends' taste implicitly, my eating-Britain track record meant that I ventured into this 'Hotel' with scepticism. Unfounded scepticism, for Hotel Chocolat really is quite impressive as a chocolate retailer. Hotel Chocolat is a retail brand associated with both a long-standing mail-order product, The Chocolate Tasting Club, and now a surprising number of shopfronts. There is a certain British tackiness to having a producer of good chocolate in a so-common-in-Britain chain format, and their very skillful marketing adds to this big-business impression (a number of British foodbloggers received tasting samples in the mail at Easter, for instance. And I'm jealous). 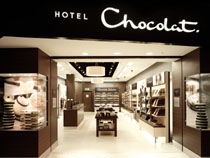 The brand is clearly pitched at a broad, self-indulgent market, as the products range from fairly gimmicky through to seriously well thought out blocks of single estate chocolate (GBP 4.25/75g). There are lots of pralines (bonbons), numerous coloured and flavoured blocks, and a rather dizzying range of simpler blocks of chocolates (GBP 2.90/100g). The prices are within typical ranges for this sort of retailer. 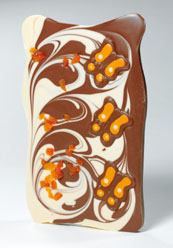 With such an ambitious range there is a reasonable danger that the focus on quality is lost, even with a large producer. Consider that the single estate 'Purist' range alone contains thirteen different bars, four of which are flavoured. Indeed, I’ve read that some of Hotel Chocolat's products are sourced from other European producers, including the German company Coppeneur, so there is even more scope for variability in product.

With the exception of a truffle with gritty couverture, I was quite happy with what I tried: three standard bars (Venezuela 43%, 72% and Ginger, Ebony (72%) and Orange) and a number of the pralines. All of these were good for their price bracket. Not exceptional, but clearly better than the mostly mundane 'luxury' products of many major chocolate manufacturers (Lindt, Nestlé, etc). Perhaps a little overpriced in comparison to the excellent Belgian brands Dolfin and Café Tasse which are generally around the EUR 3.00 mark for 70-85g. Hotel Chocolat is probably pitched below the main consumer focus of those two brands.

I also tried one 'Purist' bar — the Milk 62%. Many people regard this as an impossibility when I first tell them: how do you make a milk chocolate with 62% cocoa solids? You reduce the sugar content. This block had min. 19% milk solids. It was bitter but with a touch of creaminess — an unfamiliar combination in block form, perhaps more familiar if presented as a truffle. It's made from a Trinitario bean grown on volcanic soil in St Lucia. I would assume that the soil is in part responsible for the rather unusual flavour profile of this chocolate, with a dry and initially cold profile, gradually bringing out black tea leaves, cocoa and a touch of orange perhaps. Not really something I need to revisit. And especially at the price.

Despite my feeling of commercial overreach and slight overpricing, I would welcome it if something like Hotel Chocolat made a foray into Australia. As it stands, Australia is suffering from a gaping hole in the middle of the chocolate market. More about that in a later article in this series. (I'll add the link to that when it appears on the site.)

Two long-standing chocolate purveyors in London are Charbonnel & Walker (henceforth 'Ch&W') and Prestat. Both present their wares in attractive packaging reminiscent of decades long past and vie for a monied, snobbish market. The brands were a surprise component of the redesigned David Jones foodhalls in Melbourne and Sydney a few years ago, with that retailer's own bonus markup to make the prices even more unrealistic.

Located in the Piccadilly Arcade, a stone's throw from HRH Prince Charles's digs at Clarence House, Prestat has a small old-fashioned arcade shop. The selection of loose chocolates was more modest than I expected. An attempt at conversation with the sales assistant wasn't a failure, but any enlightenment about brand differentiation (interested tourist wanting to know how Prestat and Ch&W differ) was not forthcoming, as the Prestat assistant claimed never to have tried any of Ch&W's wares. These little revelations (whether as truth or marketing rubbish) just piss me off. Little better than a sports coach who doesn't know anything about another team's players, claims of ignorance of a close competitor's product smack of mediocrity.

No reason to return. Old-fashioned is good, but why pay the price for too-firm, pasty fondant?

Onwards to Charbonnel & Walker, whose main shop is also in an arcade, the Royal Arcade, in Mayfair (a little northwest of Prestat, in other words). Ch&W have a somewhat more modern-refined air than Prestat, but the packaging is designed to evoke a similar era. They have a wider range of boxed and loose chocolates and associated products. The sales assistant was charming, but largely unknowledgable about anything beyond Ch&W's product. She freely volunteered that she had no knowledge of chocolate until 'just recently' when she joined the company. Marvellous. I had nothing against her, but certainly wonder about a company at this level which doesn't train its staff to converse intelligently about the basics of chocolate (and I wasn't being demanding). I found I wasn't interested enough in Ch&W's range to warrant a purchase beyond a violet cream. The fondant was rather firm and the violet clean. Slightly more incentive to return to Ch&W than to Prestat, but the feeling of snob-value pricing is too great.

A relatively new kid on the chocolate block, Montezuma's has a shop in the new buildings at the western end of Old Spitalfields Market, near Liverpool Street Station. It appears to be pitched as a 'fresh young thing' with a touch of cheeky hipness and a definite philosophy, as reflected in the text on their website. The firm is based in West Sussex. 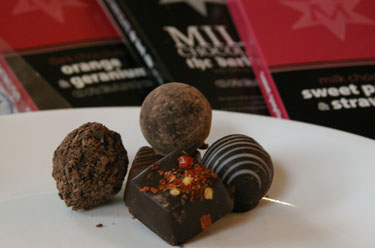 Staff were young and friendly, but I didn't get the feeling that there'd be any intelligent choco-talk. I might be doing them an injustice.

The chocolates were, broadly, enjoyable. The truffle centres were sometimes clearly and cleanly flavoured, though the vanilla one in particular seemed underendowed. Scurvy is stunningly fruity and perfumed, and reminded me clearly of a Fry's Five Centre Bar (for those who know/knew them). Two of the bars I tried were good: Orange and Geranium (73% cocoa solids) was brightly floral (a little heavy at first), while the Milk Chocolate: The Dark Side (54%, organic) showed warm cocoa notes, with strong hints of chocolate ice-cream and cake. Nice melt and good thick mouthfeel. Alas, one bar really disappointed: Strawberry and Sweet Paprika was distinctly anodyne. A fruity sweetness and the occasional minute piece of strawberry were the sole non-chocolate elements of this bar. The sweet paprika was indiscernible by four tasters. I can't understand how a manufacturer can produce such a dud next to a range of good stuff. Nonetheless, at GBP 1.85-2.20/100g for the bars, the best items in the range are very well priced. The truffles are about GBP 3.00/100g which is also good, though I'd need to try more of the range to be convinced of the value. Choose carefully and you'll be happy.

Getting serious now. L'Artisan du Chocolat is probably the UK's most prominent serious quality chocolate brand at present. They make their own couverture and have a strong reputation for very fine pralines and other products. 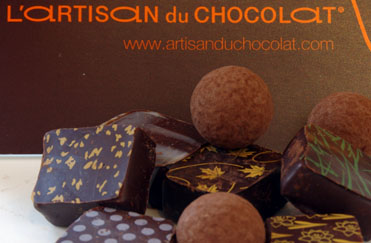 Notwithstanding the seven-year-old child nagging his mama to buy 'another' bag of Tasties at GBP 5.50 for 150g (what the rest of the world would call Smarties, though that is, of course, a trademark of Nestlé), the shop in Lower Sloane Street wasn't as dauntingly exclusive as I had feared, and the aroma and display of chocolates was seductive. The pralines take the (increasingly common) form of uniform filled rectangles with an identifying pattern on the upper surface, and cost between GBP 5 and 10 per 100g, depending on how you buy them.

The pralines (all from the 'Couture' range) were rather variable, though clearly all of a much more impressive standard than any of the previously mentioned producers and with a lovely ganache. Still, it was odd that my sample ranged from the bold and fruity Rose, clearly evoking Turkish Delight rosiness, to the almost absent Lavender. In between were Moroccan Mint (mild and hard to characterise), Violet (so delicate as to disappoint), Madong (smoky and interesting), Green Cardamom (delightful), Tobacco (intriguingly hot and fruity, reminiscent of chewing tobacco).

Another product, the Liquid Salted Caramels, has received a good deal of praise in Britain. They were good, but by no means earth-shatteringly amazing. I think the novelty of a chocolate ball with a runny caramel centre perhaps seduces people too readily.

If I had the ready cash, I would make L'Artisan du Chocolat one of my regular haunts — by choosing the successful varieties for my palate I could happily grow squidgy on this producer's diverse range of yummies.

Alas, I arrived on the wrong day to sample Paul A Young's wares in Camden Passage. The shop was closed. Very sad, as I'd been building up to this final tasting before moving on to Paris. C'est la vie and all that. There will, I hope, be another opportunity.

[This is the first article about travel. Others: London/UK, Paris.]