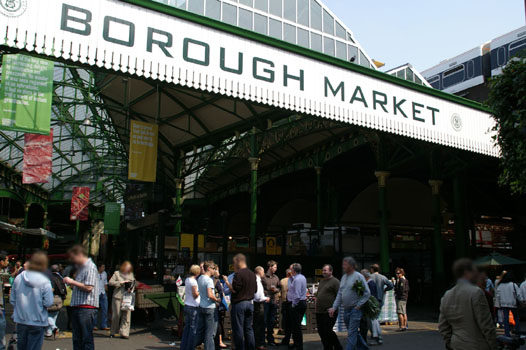 [This is the second article about travel. Others: chocolate in London, Paris.]

It’s three years since I was last in Britain and I was curious to see what might have changed in the food scene. I’ve tried to keep up, reading the Observer Food Monthly as often as possible (I prefer the paper version rather than just browsing articles online) and paying attention to discussions on eGullet. It wasn’t hard to miss the popularity of gastropubs, the growth of decent chocolatiers, and the burgeoning enthusiasm for organics. (I last lived in Britain at the turn of the millenium and saw the beginnings of the organic boom there.) Below are some observational tidbits.

A fairly new chain of organic lifestyle stores in the UK (not to be confused with a grower in Australia). The emphasis at Daylesford Organic is primarily on food, but they also stock other items (homewares). I visited the store in Pimlico – a large store over three floors, with very clean, minimalist appearance (polished stone surfaces, pale timber, white white white). The ground floor contained an eatery (absolutely bustling on a Saturday morning) and fresh produce, while upstairs were honeys, oils and other edibilia, plus homewares. It won’t come as a surprise to you that the prices were, well, hhhhigh… which is not to disparage the impressive range of products.

At the back left of the ground floor were refrigerated displays of dairy and other products, including some very pretty gull eggs. A lady was carefully filling a six-egg carton. As she walked past me, I asked her what she would use them for.

‘Oh they make a wonderful omelette,’ she said. ‘The flavour is lovely. Though probably not enough to justify the expense.’

Opposite Daylesford Organic is an island of concrete and trees. This is Orange Square, the site for the weekly Saturday farmers market. A modest market, with approximately 20 stalls. (The London Farmers’ Markets website lists 42 vendors, but this is a far cry from the number there on my visit.) Juice is a popular item. Fresh, variety-specific apple and pear juices. Some meat and cheese stalls, bread, flowers and veg. The produce was interesting and generally of good quality, but not all stall-holders were able to answer (fairly basic) questions about their produce.

Markets require planning and control, so there are often quotas on how many competing stalls there can be. The rather perverse result is that some stall-holders sell ‘unauthorised’ wares under the counter.

This one is a Sunday market. Definitely larger than Pimlico’s, there are about 40 stalls. Produce variety is slightly greater, though I saw more ready-to-eat food here than at Pimlico. Some overlap in vendors between the two markets, which probably shouldn’t be surprising. 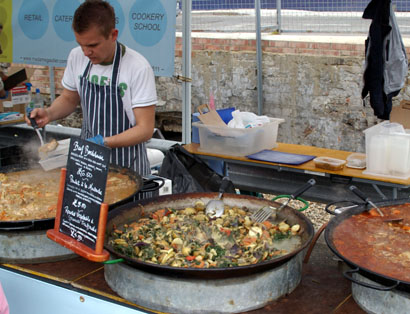 The greatest happiness came with the discovery of a stall selling unpasteurised milk. Descriptions of fresh (raw) milk often talk about the warmth and creaminess of the milk. Unfortunately, I find warm milk quite vile, so the thought of warm, thick, tasty milk has never been a marketing success in my books. Thank goodness the Grove Farm Hollesley Bay Dairy were offering tastings, chilled. The milk was, well, not at all vile. Not special either. Just nice, cold milk with more cream. We bought a bottle. 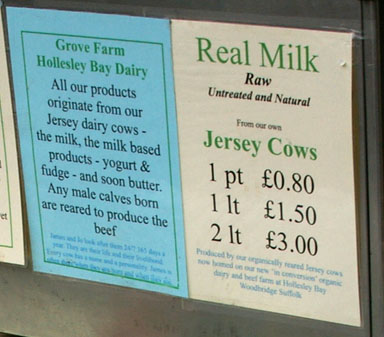 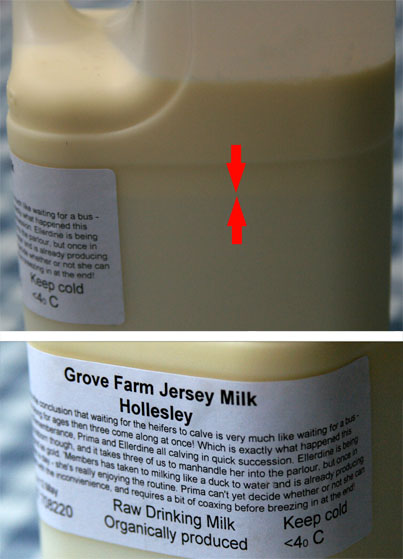 Close by, on Moxon Street, is the London butcher and charcuterer The Ginger Pig, renowned for raising their own livestock, thus controlling the entire foodchain for most of the products they sell. They also have a refreshingly blunt philosophy about this process:

We need to move on from our obsession with the word ‘organic’, which is now less about product than about lifestyle. From planting the seed to harvesting the crop, from breeding the animal to feeding it and slaughtering, we oversee the whole process. We’re not selling a lifestyle. We’re selling food. (Read more)

A few doors up from The Ginger Pig is La Fromagerie, a grocer and café with an impressive cheese room. The website has numerous pictures that give a good feel for the place, and a great cheese search engine. Sensibly, the number of people permitted into the cheese room was limited. The café space was bustling and the food smelt good. Although the appearance of La Fromagerie and Daylesford Organic are very different (earthy, rustic modern vs stark modern), I’d say the clientele is fairly similar. 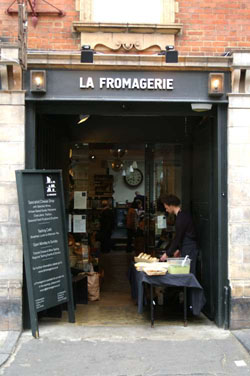 I’ve heard far too many people rave about Borough Market. It seems to be a writer’s duty to mention it with enthusiasm (if the number of mentions in articles, interviews and live talks is anything to go by). While living in London about six years ago (as the market’s popularity was on the rise, thanks in no small part to Jamie Oliver), I went to Borough Market twice. It was not impressive for someone used to Melbourne’s Queen Victoria Market.

I had resolved to give the place a third chance. So many years had passed and people were still enthusing. Maybe something had changed. I went. 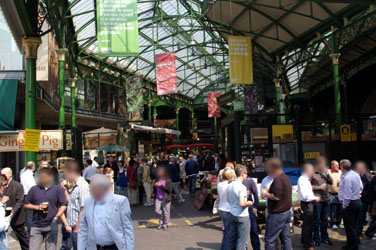 Six years ago I found Borough Market to have a disproportionate number of takeaway food stalls and not enough produce for real people. Sure, you could buy Austrian jams for wildly inflated prices (perhaps three times the retail price in Austria) and organic chocolate truffles for a cool GBP 100 (A$250) per kg (if memory serves me right), but this wasn’t a market for the everyman/woman. 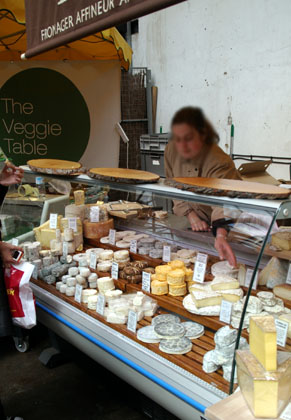 I was so happy to see a number of well-stocked cheesemongers with knowledgeable, engaging staff offering liberal tastings. The same could be said for some of the charcuterers. The initial impression was of a more accessible, interesting market than previously. However, it still lacks the feeling of lively competition and practical purpose that makes real everyday markets atmospheric. There are relatively few vegetable stalls or butchers (quite a lot of cryovac produce too). (If my impression is wrong, please correct me.) There are quite a few boutique producers but many show a too-strong tendency to head down the cute-expensive path. At least I found some absolutely delicious fudge from Burnt Sugar — if you have the chance, try their ginger or sea salt varieties! 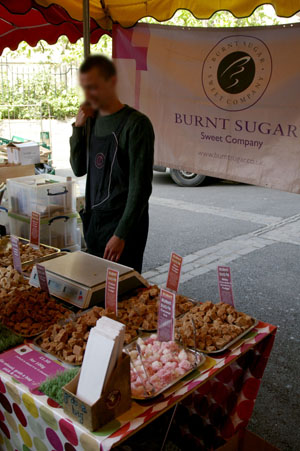 You still get the feeling at this market that cooked food dominates. There is a real thronging of people to buy lunch or snacks, and searching the internet reveals more comments about ready-to-eat food than produce at Borough Market. The atmosphere at this market is good and on a warm day is vibrant. But despite the pleasant experience with the cheesemongers (and I’m sure there are other gems in the market), I don’t feel it’s a place for people who love food and cooking without trendy pretence – it seems very much a reflection of food-as-lifestyle. 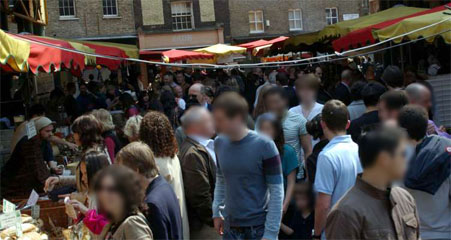 British supermarkets differ greatly from Australian ones. Ready-meals take up whole refrigerator aisles. Environmentally suspect packaged portions dominate in lines that Australians would expect to find loose at the deli counter. Conversely, the quality of unpackaged meat at the butcher’s counter is miles ahead of that in Australia. Dairy sections have an excellent range of cheeses. The quality of in-house bakery lines is generally better too, and there is more diversity and quality in the cakes and patisserie lines sold. (Let’s face it, in-house bakery/patisserie lines in Australian supermarkets are mostly aimed about one millimetre above garbage.) British supermarkets have a greater range of baking ingredients and, increasingly, the quality of fruit and veg should shame the Australian giants, Coles and Woolworths/Safeway (and the price difference between the two countries for fresh produce is much, much smaller than it was a decade ago). Before you think I’m on a love-in with Sainsbury and Tesco, I assure you that the presence of more basic multicuisine ingredients (from tofu to kaffir lime leaves) in Australian supermarkets and the generally more friendly and efficient service (yes, even if your Safeway only has seemingly-vapid sixteen-year-olds on the tills) is enough for me to embrace Coles and Safeway.

An interesting development at Sainsbury and M&S (and, presumably, Tesco and Waitrose) was the greatly increased detail in labelling. The bag for the potatoes showed the variety, which farmer/producer grew them and where. The same was the case for the bacon I bought. This is impressive, catering to the burgeoning demand for information on provenance. In Australia this is still primarily a point of discussion about meat, if at all. Imagine asking your supermarket assistant where the bacon was from! Australians aren’t yet (hopefully never) as scared of food as the British seem to be – in Britain there is more reason, given the BSE and foot-and-mouth scares, the presence of salmonella in poultry, a very strong animal rights lobby, and (broadly) a loss of understanding of food during the twentieth century. If enthusiasm for this kind of labelling were to rise in Australia, it would require a radical change in the food industry, challenging large, faceless producers and suppliers and introducing a public accountability that the supermarkets and many others would be distinctly uncomfortable with. 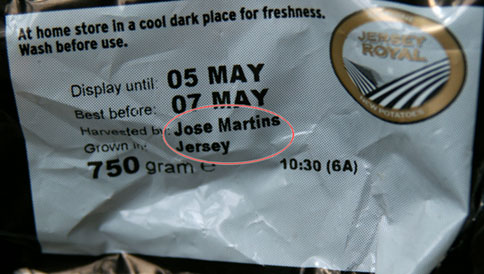 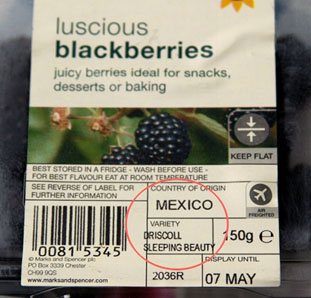 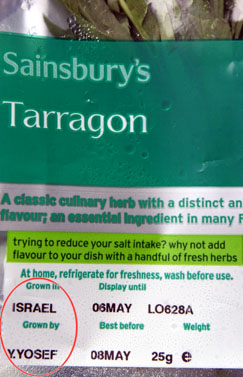 Of course, you can’t expect everything on the British food scene to change overnight (or in a decade, say). There are still patisseries in Soho serving outrageously priced little choux pastries filled with chocolate cream. The cream is that cheap-bastard favourite: crème pâtissière with lots of cornflour and little (if any) egg. GBP 4.00 (A$10.00). The establishment (like so many others everywhere) is in most of the guidebooks and presumably survives on past glory and the gullibility of guidebook readers (I’m sure we’ve all fallen for these places many a time).

And on a starkly different wavelength, Harrods is now an outlet for Krispy Kreme doughnuts. 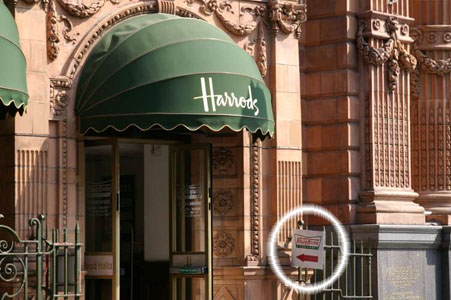 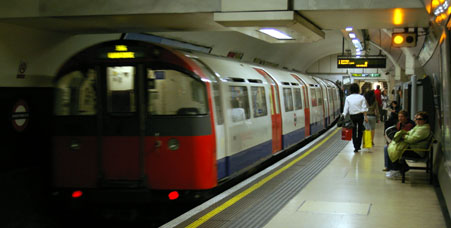 I came over all warm and fuzzy as the beautifully calming Voice on The Tube announced ‘This … is Waterloo.’ She’s new since last I was there. Much nicer than the ‘Pleasemindthegapbetweenthetrainandtheplatform’ man. My Eurostar train awaited.

– DM
[This is the second article about travel. Others: chocolate in London, Paris.]