[UPDATED: PRODUCTION HAS ENDED FOR NOW. SEE THIS ANNOUNCEMENT] Some people are organised enough to document a project and then tell their readers all about it, blow by blow. Not me. All good intentions of snapping photos evaporated as I juggled the eccentricities of an induction stove, the buttons and dial of a fancy Rational oven (it does almost anything, except tell me why it’s not doing what I want!), and the largest macaron batter I’ve ever made! You see, on Monday I stepped into the kitchen of the new food venture, EARL Canteen, by Jackie and Simon. 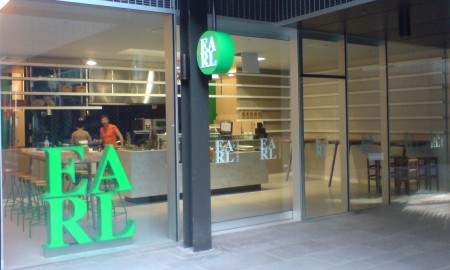 You probably all know that I expect a lot of the macarons (one-O, not macaroons) of the world, and Jackie finally persuaded me to try my hand at commercial production late last year (abetted by another long-time nagger who is largely anonymous). I understand the baking challenges that confront the home cook, and have never understood why professionals in Australia don’t do a better job. I also understand the pressures and limitations of business (my dream of gold-leaf initials on my macarons will have to wait… hehehe), but a professional should manage demands of mass production and cost and time, right?

I hadn’t been at the practical end of a commercial kitchen until about three weeks ago, and my first production run was, well, last Monday. I went from home batches of at most eighty macarons to 250 in one fell swoop. And you know what, despite everything (including batter up my armprints and ganache down my front), I’m pretty happy with the final product. There are some things that I think could have gone better (no way I’m telling you what, hehe), and I’m sure I’ll be more satisfied as I get more into the groove. And my piping technique has improved:)

Of course, I hope that customers of EARL Canteen enjoy my macarons and that they meet expectations at least most of the time (hey, I’m aiming for all the time, but nothing can be perfect).

Choosing launch flavours was fun. By pure chance, I saw finger limes at my local Coles supermarket (apparently they bought almost the entire supply for this season… I hate to think how much of the fruit went unsold in the stores). I liked finger lime immediately. Funny little “capsules” (actually “vesicles”) of tart, slightly peppery/musty juice. They’re quite robust, and I immediately thought of mixing them into a ganache. Pop! Pop! Fun. Indeed, someone has already described this macaron as “like a sour warhead going off in your mouth”! 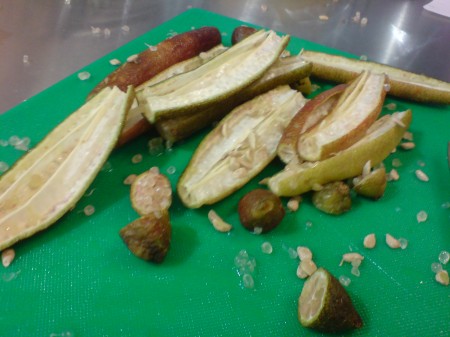 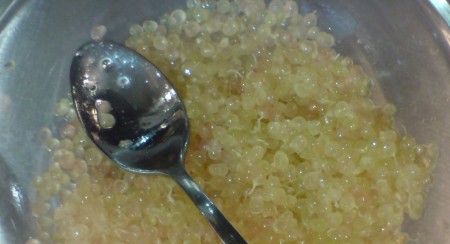 Despite this fun, in macaron mass production I found the fruits are an utter bugger to de-capsulate, so to speak, as the vesicles are a bit sticky, and there are quite a few pips in there too! Grrrr.

The second launch flavour had to be passionfruit. Why? Well, Pierre Hermé (the Parisian super-master-macaron-deity) has a delicious, popular passionfruit+milkchoc macaron named Mogador, and everyone seems to love it (including Sarah, who indicated dire consequences if passionfruit didn’t make a rapid appearance in my repertoire). I wanted something fresher, brighter than the Mogador, as passionfruits are in season right now, so a white chocolate ganache was ideal. Add a few pips for cosmetic value and surprise crunch, and there you go…

I’ve agonised over branding for my macarons, and eventually settled on simple, clear Macarons by Duncan. I guess it’s as honest as can be! I hope you like the logo. Was fun and fiddly to get that far. Every Macaron by Duncan will bear a small, colourful dot on one shell… it seemed a fun way to “brand” the product. What’s more, every flavour has a name. Sometimes there might be a reason, sometimes it’ll be a whim. Finger lime is CLANCY dark. Passionfruit is ZARA white.

A third flavour is on the way, quite possibly this week. I’ve set up some subscription options on the Macarons by Duncan page, so that people can keep up with new flavours (and a small amount of trivia (if you subscribe via Twitter) relating to Syrup & Tang, The Gastronomer’s Bookshelf or food in general).

For the moment, I have an enormous list of ideas for new flavours, but if you’ve got a reallllly special request, you can always message me… maybe sometime in the next year I’ll squeeze it in! (Honestly.)

Thanks to all who have encouraged me to make the macarons happen, especially Jackie for making it possible, and Harry, Mittens, Josh, Sarah and Thanh. And thanks to Mark, Y-C and Matevz for their technical advice. I hope everyone enjoys them (if you live nearby or are visiting).

Welcome to the first two flavours! Permit me to introduce Clancy and Zara.

CLANCY dark: small bursts of the juice of an Australian native finger lime (a hint of pepper in the flavour) are a refreshing surprise, hidden in a dark chocolate ganache. 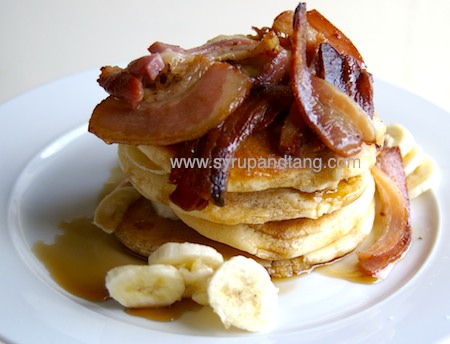 For the most part, I’m not the kind to dally over, under or prior to breakfast. Once upon a time, I could barely manage the few minutes of showering before my stomach felt like it was devouring me. Staying with various friends in Germany was a special torture, as the morning routine extended beyond showers and shaves, to setting tables, brewing coffee, laying out cold meats and cheese, and popping down to the bakery for fresh rolls. At times, breakfast begins more than an hour after rising. (It must be said that such German breakfasts are delightfully homely affairs — totally gemütlich — and can fill a day with bonhomie. But only if I haven’t already collapsed from the aforementioned self-consumption.)

Breakfast, as some readers already know, is rather important to me, associated with simple but very important dietary specifications. It is, however, here that I first reveal the temporal parameters of my breakfast. As a child, I would eat before showering. Little did I know this would establish digestive patterns that have turned me into a wimpering hunger-immobilised wreck when visiting Germans or poorly-catered hotels.

As a student, I tried going to the gym before breakfast, and quickly found myself staggering, zig-zag fashion, across campus as my nervous system gradually shut down non-essential functions. I think it was around about this time that I discovered morning croissants were not only delicious, but an excellent surrogate for gym exercise.

After quite a few years of travelling, I can now manage almost 45 minutes without food before my stomach starts gnawing. And you know, 45 minutes is just right for making puffy pancakes. I grew up with my mother making pikelets (the only true puffy pancake in my family) with butter and golden syrup for special breakfasts, and of course she was up well before me, so there was never a delay in product delivery. As an independent adult, these morning luxuries have been rare, because they take too long.

However, I was so attracted to the recent tasty photo of banana/bacon/ricotta/maple pancakes on The Last Appetite a few weeks back that I decided to brave the ticking clock and reproduce them at home. 45 minutes. Done, dusted, devoured.

I rarely post recipes on Syrup & Tang because most readers have their own trusted books, or you can Google pretty much anything (with about an 85% chance the result will have been “adapted” from a book). So, off you go and find some fat pancakes (often called American pancakes. I like the buttermilk pancakes in Stephanie Alexander’s big fat Cook’s Companion). Slice or mash some banana. Fry some streaky bacon over low heat for quite a long time until fairly crisp. Have heaps of butter and maple syrup ready! Try not to forget the ricotta whipped with honey (ehem, damn). Devour noisily.

And if that doesn’t suit you, have a bowl of Rice Bubbles. They’ve made me the man I am today.

Postscript: My co-eater, Mittens, was browsing through Maggie Beer’s Maggie’s Harvest and came across a salad with pear and prosciutto. “How about this on our next batch of pancakes?” What a good idea… (not the salad part, of course).

[UPDATED: PRODUCTION HAS ENDED FOR NOW. SEE THIS ANNOUNCEMENT] After many years of making and writing about macarons, it has become time to share my enthusiasm directly with a wider audience. You can try my macarons exclusively at EARL Canteen in the courtyard behind 500 Bourke Street, Melbourne (website). Supplies are always limited! Special orders should be made via EARL.

Every new flavour has a name, a description, and a version number so that macaron lovers (and I) can keep track of their favourite flavours and modifications.