A few years ago, an American friend of mine in Denver told me of a chain restaurant (he worked there) which had served a slice of cake containing something like 2300 calories. Despite my sweet tooth, that just seemed foully excessive. Not long ago I found a magazine article that confirmed he wasn’t lying and that there are a lot of people consuming unimaginable calories in the USA… Another post in my quest to find disgusting food the world over, here’s a beautiful illustration of just how many calories can be packed into one pointless meal.

Marie Callender’s perpetrates the ultimate sleight of hand here: the nutrition information says this medium-size entrée has two servings, but honestly, when have you ever split a potpie? …

… but there’s much more indigestible “joy” to be found in the Men’s Health list. Ugh.

Honestly, if you’re going kill yourself with meals that are four times the recommended daily energy needs of an athlete, you should do it with homemade pastry, chocolate, custard, ice-cream, macarons, homemade bread and delicious cheeses!

A new get-together of Melbourne’s foodbloggers is here! It’s been a while since foodbloggers gathered in Melbourne, and Thanh (I Eat Therefore I Am), Sarah (Sarah Cooks) and I were sad that the heatwave made it necessary to cancel the BBQ/picnic planned for early February. Thankfully, our decision was absolutely the correct one, given the awful events of that weekend.

The new event is scheduled for Saturday 7th March, 2pm, at The Commoner in Fitzroy. Yes, the very kind owners of The Commoner emailed us and offered to host the event, giving us access to their courtyard and… wait for it… their wood-fired oven (named Sergio) for heating up food.

The Commoneris at 122 Johnston Street in Fitzroy, just off Brunswick Street and easily accessible by tram 112 towards West Preston. This tram runs along Collins Street in the city, passing Spencer Street (Southern Cross) and Parliament Stations and only a short walk from Flinders Street Station. A number of eastern suburbs buses also run along Johnston Street.

Come along! Tell other foodbloggers! As with some of the other foodblogger get-togethers, you’re encouraged to bring some food (preferably to share and enjoy together). As the owners of The Commoner have been so kind as to make available their courtyard and oven free of charge, it would be preferable if people would buy drinks from the restaurant’s drinks/wine list, rather than doing BYO.

Please use the comments area below to say if you’ll be bringing something to share and what… this way we can try to achieve a balance between savoury and sweet. 🙂

I present my new creation: le macaron déshydraté au chocolat noir et à la noix de coco. Behold the lovely thick layer of dark chocolate and toasted coconut ganache… so generous you might think I’ve been shopping at Pierre Hermé, but no! I am in fact lining myself up to compete with the maître himself. And I’ve done something completely new. These beauties are the first completely desiccated macarons ever presented for public delectation. With skill and precision, I transformed my piped ivory wonders to these richly tanned rusks. Be quick, as these are definitely a limited edition from Maison Duncan. 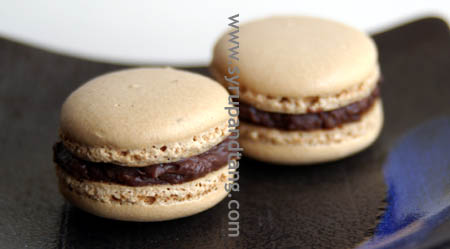 You see, there I was sitting on my sofa, reading the bazillion blog posts in my feed reader (how many times do I have to tell you internet people to stop writing so much and get out more??). Suddenly I had one of those lurches in the stomach, a wave of nausea that only careless pâtissiers and confiseurs can truly know… a good deal more than eight minutes had passed since my tray of macarons had been consigned to the oven. Nooooooooooooo!!!

And so these macarons déshydratés were born. Deeply tanned almond macarons as one might find on a beach on the Côte d’Azur.

There’s one very useful result of this approach to macaron cooking. You can get a clear feel for whether you’ve done the batter right and set the oven temperature correctly. You see, in their state of petrification, you can cut open the macaron without any fear of crushing and see the crumb. No big air pocket. Hooray. Good foot. Hooray.

Thankfully, I can do one of those television chef “here’s one I made earlier” jobs and show you some pretty little things too.