I’ve spent much of the last week limply scrolling the trackball of my nifty mouse, trying to conquer the number of posts in my feed reader. These are the thrilling things you do when you are, seemingly, the last person in town to have come down with the flu/bronchitis/laryngitis which has been ravishing Melbourne for the last four months.

For the entire week, Google Reader displayed the ominous message “All items (1000+)”. It never changed. I scrolled and scrolled and scrolled, scanning titles frantically until my eyeballs were rotating faster than the trackball. It’s probably a good thing that the Reader doesn’t bother counting higher than one thousand. I would venture a guess that I had over 4000 items waiting to be read. Had I realised that, I might just have blitzed everyone’s words and started afresh. Goddamnit! You people write too much!

Alongside all the foodbloggers from near, far and further are my trusty brainfoods… places like BoingBoing, Freakonomics, ReadWriteWeb, Science-Based Medicine, to name a few.

But you know what? Today, at 23:26, my cramping scroll-finger shivered with joy as the Google Reader showed I had scaled the pile of feedliness. “All items (926)” Sadly, this cannot last without further cramping and maddened eyeball rolling, for those 926 items encompass a mere six days of posts from the various feeds. Six days. People, stop writing so much! 😛

It was lucky I could calm my nerves tonight on a special delivery, courtesy of the J-man of Malvern and, more precisely, the favours of J-man’s jetsetting Mother-V. Late last night I received an SMS: “Make time for me tomorrow. Just ten mins.”

The merchandise was handed over in Bourke Street. A small, nondescript package. Furtive glances. I concealed the tupperware under my jacket and hastened back to the office. I clung my bag tightly to my bosom all the way home. (It was rush-hour, so pretty much the entire train felt like it was clamped tightly to me.) 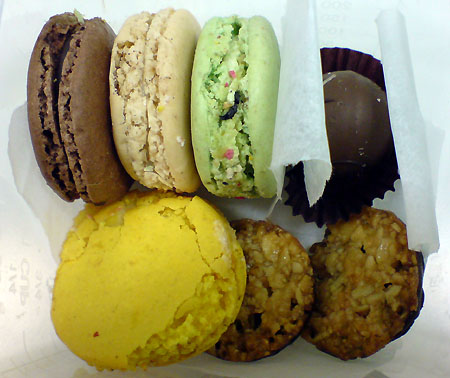 Air-freighted from Ladurée, Paris. What a way to lift the mood after a week of trackball scrolling and watching bad telly.