But first let me say that I’m glad to see the back of 2007. It wasn’t my favourite year in many respects. This year I had to teach myself not to care about stuff, which doesn’t come naturally. I waved goodbye to The Age Epicure (though waving isn’t two-fingered enough, if you get my drift). I juggled four jobs with less to show for it.

On the positive side, I ate lots of wonderful chocolate (though found that disciplined chocolate tasting really spoils the fun). I designed this website with lots of encouragement and support (thanks, Harry!). I enjoyed the enthusiasm of Melbourne’s and Australia’s foodblogging world. I acquired a lovely white Macbook on which something new for the site is currently brewing. I ate some of the best olives ever (thank you, Simon!). I drank champagne with hibiscus flowers (thank you, Debbie!). I ate at the infuriating (Fat Duck) and inspiring (Interlude. Thanks, Robin!) ends of the ‘new cookery’ spectrum.

I’m hoping 2008 will involve more enjoyment and less crap for all of us.

Down to the food now… 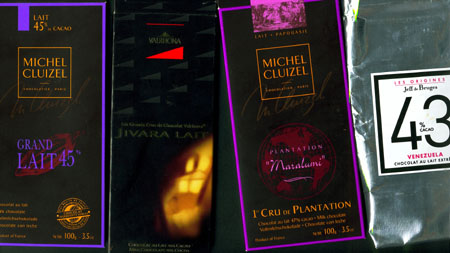 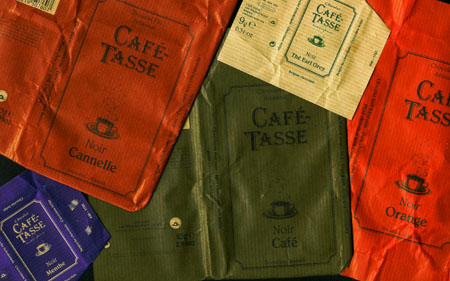 I’m very interested in high-cocoa milk chocolate (hence the first selection above). Valrhona and Michel Cluizel provide reliable satisfaction (though not at Australian prices! Imagine, for a moment, that a block of either costs less than EUR 4.00 in France — at most AUD 6.70! Now prepare for the sticker-shock next time you go shopping in Oz.)

The second pic shows one of my favourite middle-of-the-road Belgian brands, popular in France but alas almost entirely unobtainable in Australia (I saw some gift boxes at The Barn in Rozelle (Sydney) a few years ago). Café Tasse does a wonderful range of large and small blocks and tiny mini-tablets.

Meanwhile, I was enchanted by the meticulous presentation and packaging of the chocolates from Richart. There are seven flavour collections, including the Balsamics, the Citrus, and the Herbaceous. Intriguing. And expensive! Each of the chocolates is a tiny cube, a mere 15 mm across, filled with flavoured ganache. Individual flavours include things like ylang-ylang, basil, cinnamon, fennel, ‘bouquet exotique’, thyme, lemon, etc. The range was very interesting, with complex notes in many directions, though too often failed to deliver enough oomph to be special. I’ve complained about excessive subtlety in ganache flavourings previously. 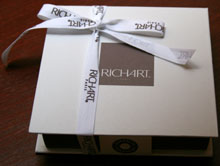 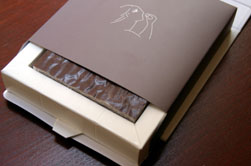 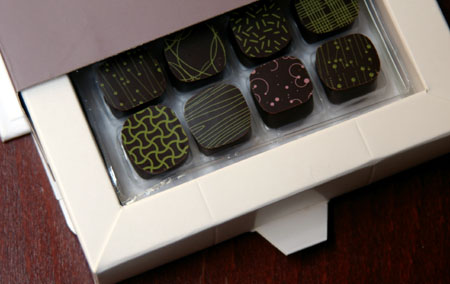 In Lyon, one of the premier chocolatiers is Bernachon. A kind soul had recommended that I try one of their palet d’or (see below). These are large (from memory, approx 7 cm in diameter) thick discs of firm dark chocolate-crème fraîche ganache, flecked with gold (my personal value increased with every bite). I’ve seen similar pucks around France and never felt tempted… and I must admit I only bought this at the kind soul’s behest. Well. What a stunner! Rich, complex, fragrant. You could eat one a day and die happy (and prematurely, and broke). 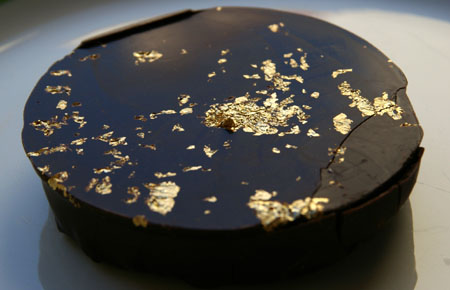 They also do a range of cakes, including this delightful (if a tad butter-creamy) thing of caramelised pistachio paste, pistachio cream, kirsch flavoured chocolate cake and more. Mmmm. 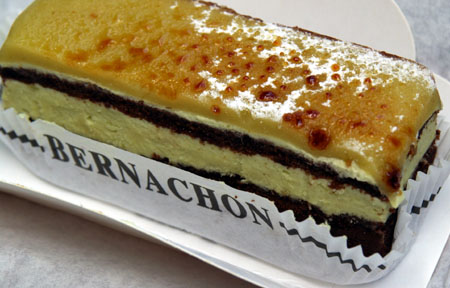 Amongst their chocolates there were some curious ovoids called, um, Romanoffs? Mendelsohns? Mussorgskys? Something like that. A flavoured chocolate paste enrobed in a coloured, gritty sugar shell. 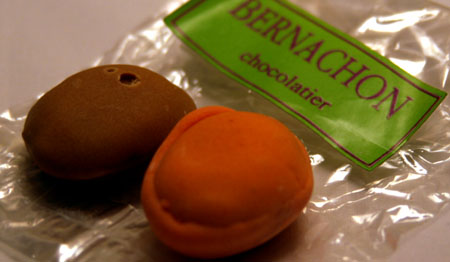 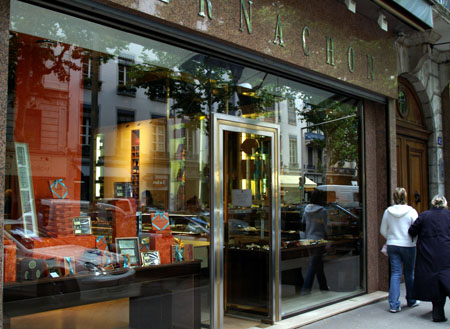 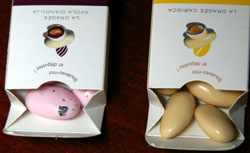 This year I did disciplined tasting of many chocolates from the UK and France. Ones I haven’t written about previously were from Jean-Paul Hévin, La Maison du Chocolat (LMdC) and Michel Cluizel. Cluizel is the only one available in Australia. I’ve seen the pralines (bonbons) in only a couple of places. They don’t quite equal the quality of Hévin or LMdC. Hévin is highly regarded and the pralines were mostly well-judged and interesting, though I had my only horrendous-French-customer-service experience ever at the hands of one of their staff. LMdC is a long-standing chain with a strong international presence and, despite this, has a product which stood clearly above the others, much to my surprise. They could open a shop in Australia. I wouldn’t complain…

2007’s travel was very much about catching up on things I’ve skipped previously. Finally time to visit the pâtissier Gerard Mulot. His macarons are excellent (I think he’s won a prize) and the tarts were delectable. An additional positive: despite his renown, the shop in Paris’s 6th arrondissement was relaxed and unpretentious.

A new place for me was the outstanding Pain de Sucre in rue Rambuteau (3rd arrondissement). Macarons (stunning), marshmallows in a cornucopia of flavours, bread and delighful tarts. 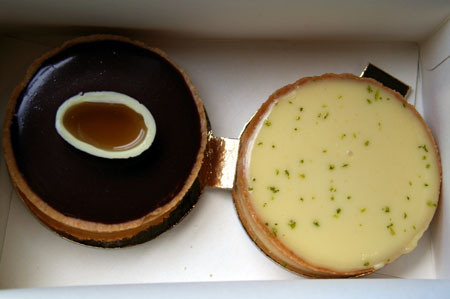 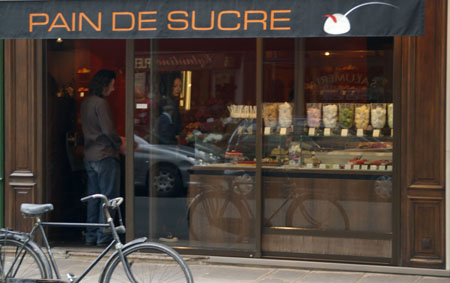 8 thoughts on “End of year notes (with extra chocolate)”