Phew! I’ve just finished making my Solstice 2008 cake, and not a moment too soon. Sunset is in nine minutes and Another Outspoken Female has demanded that all entries in her baking meme be in by sunset! Of course, it helps if I check my calendar better… I’ve just realised I’m a day early for the deadline. Don’t you just hate it when you bust a gut prematurely?!

I’m not sure if my entry will be regarded as legit. It’s a slightly Parisian take on fruitcake, if you get my drift.

I present to you my Solstice 2008 Spiced Macaron Cake: 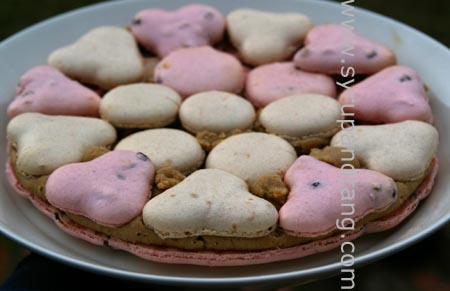 The base is a disc of macaron flavoured with clove and nutmeg and dotted with currants (the first time I’ve used such large inclusions in the batter.

On top there are small macarons in two shapes, and two flavours. Some are the same as the base, while others are cinnamon and orange rind.

And sticking this all together is a butter cream with ground almond, brown sugar, allspice, cinnamon, mixed glacé peel and rum (I had run out of brandy). 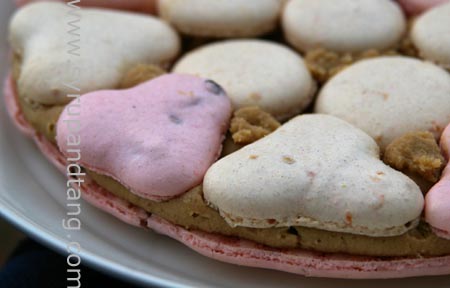 I hope this brings out all the characteristics of a pagan festival cake:) Happy belated Solstice everyone (it was, after all, on the 21st, not today).

8 thoughts on “Solstice 2008 cake – with a slightly Parisian touch”