Like a gift from the heavens, a PR person offered me frozen pizzas to sample. I’m really not the ideal candidate, but with my Duncan’s Degustations series underway, how could I resist the opportunity to add to my spectrum of likely-ick experiences?

Offered a sample from the range of four flavours of Dr Oetker Pizza Ristorante pizzas, I asked for one. To my dismay, I was sent eight (8, acht!) of Herr Doktor Oetker’s frozen creations. It was already a hard ask for me to contemplate one, let alone multiple frozen pizzas.

I can’t recall when I last (pre-Oetker) ate a frozen dough disc with topping. I mean, I don’t even buy takeaway pizza. I make my own pizza. Often. Bottom to top. Sometimes it even has pineapple on it.

Dr Oetker, well established German ingredient company (nowadays prominent in preprepared foods, basic cookbooks including one classic translated into English, plus shipping and finance), has for some reason decided to expand into the Australian market with, of all things, imported pizzas. That’s right. Your supermarket freezer cabinet contains pizzas imported from Europe. How’s that for pointless food-miles? At least the origin isn’t fudged (in fact, the packaging is distinctly international), unlike the bread and pastries at Woolworths which are no longer clearly marked.

Back to the food-tasting side of this. You remove the very flat pizza from its shrink-wrap plastic cover (tasty touch that) and pop it in the oven at 220C for 11-13mins. And out comes… 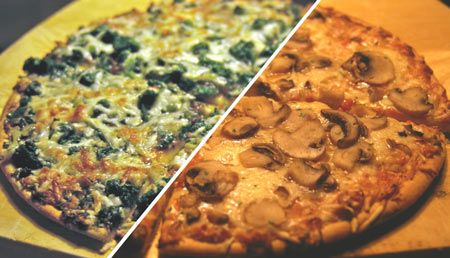 Having eight of these buggers, I had to share them around. My parents were more than a little resistant, but bravely agreed to try Mozzarella. My nice neighbours are more open to preprepared foods, so I thought they might offer a different perspective on all flavours. And Mittens and I ate the Spinaci and the Funghi. (Curiously, perhaps for quarantine reasons, there are no meat pizzas (except tuna) being imported into Australia, despite the German range being about 50% meaty.)

The underside before baking (parcooked base).

This is one of those rare food products which is entirely edible, but left the tasters cold. In an emergency, I would willingly eat these pizzas. Given a choice, I’d choose a chunk of cheese or an apple or a slice of toast with Vegemite instead. Surely any food should evoke a stronger preference than this, whether positive or negative? What a strange achievement by Dr Oetker’s food technologists.