Five days in Corsica, surrounded by the azure waters of the Mediterranean, dwarfed by mountains and cliffs, eating myself full with sausage and cheese. That was the plan. The food part of it didn’t quite come together. 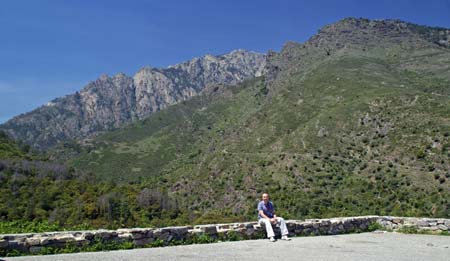 A common problem for holiday-destination islands (and many warm, sunny coastal areas, of course) is the tacky tourist-oriented commerce that easily overwhelms the towns and villages where tourists stay. Although Corsica isn’t the Costa Brava or the more blighted areas of the Algarve, the coastal towns clearly live off the waves of sun-seeking tourists from April to September. The culinary outcome isn’t good.

Searching eGullet for tips about food in Corsica wasn’t encouraging (it barely seems to be on the map for most eGullet members, so there wasn’t a lot to go on in the way of tips) and, unsurprisingly, Corsican cuisine is mostly about the “rustic” end of the spectrum – cheese, sausage, stews, etc. That’s more my direction of interest anyway, so I didn’t feel deterred… I just learned the names of many traditional dishes and ingredients so I could recognise them on menus.

Disappointment came, however, in the effect of masses of sun-tourists on how much real local food was easily available. In the northwest of the island there was some pitching at tourists interested in cuisine typique corse, though easily overshadowed by pizza and pasta, but as soon as we headed across the island to the southeast (lots of resorts and beaches), pizza, pizza, pizza and pasta was almost all that was left.

Starting in the north, our first lunch involved a large salad with the local fresh ewe’s/goat’s milk brocciu (similar to a smooth ricotta or Portuguese queijo fresco) and pieces of figatellu, a smoked pork and liver sausage. Dinner was civolle pienu – onions stuffed with… brocciu and prizuttu (like prosciutto), roasted, then a dish of roasted Corsican lamb (overcooked). Breakfast was a lemony cheesecake called fiadone, made with… brocciu. 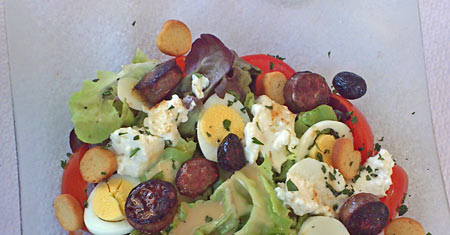 We headed through the centre of the island, stopping in the major crossroad town of Corte for lunch. A central square in the old town featured numerous restaurants squarely aimed at tourists. It was a little disheartening, and despite many promoting Corsican “menus”, many of these were little more than salads (see above), omelettes with brocciu and mint, or dollops of brocciu in otherwise broadly French dishes. We were lucky to choose a restaurant with a passable “assiette Corse” or Corsican cheese and charcuterie plate. A great find, because it delivered four tasty local types of sausage (lonzu, coppa, prizuttu and one more), a terrine and a tomme-like cheese, plus a lovely fig jam. Whether any of these really displayed a Corsican “signature” flavour, however, was hard to divine. A boar stew with gnocchi was also delicious. 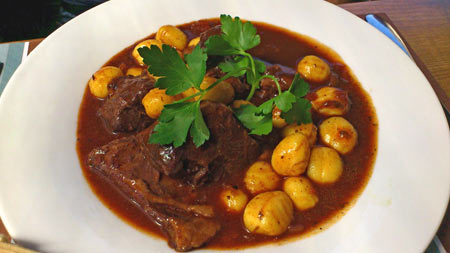 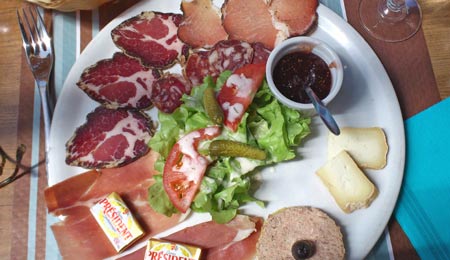 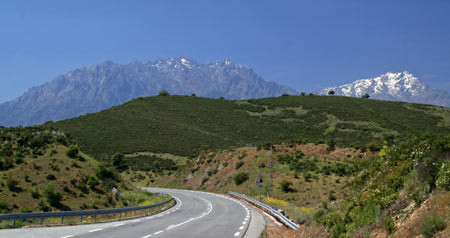 By the time we reached the southeast and were looking for dinner, we sensed disappointments ahead. The simple promotional slogan of cuisine typique corse was almost gone. Menus claiming Corsican dishes offered, again, salads or some pasta dishes with hints of Corsica but little more. Grilled meats and fish, or ravioli stuffed with brocciu and silverbeet are traditional dishes, but where were the various prepared meats, the boar, the stews, the chickpeas, anything using any other local cheese? Even the fancier restaurants, claiming again to be in Corsican style, displayed menus of modern French cuisine with little remarkably local input other than chestnuts and locally sourced fish and meat. For most tourists, the closest they’ll come to a diverse range of Corsican foods is the recipe postcards on sale everywhere, or the sausage stands in the supermarkets.

No doubt, the story would have been very different if we had been able to spend more time in the north and in small inland towns or villages, or visit local producers. As can be seen from these two excellent articles (Corsica Isula, NYT), there’s more to Corsica than can be readily discovered by tourists without local recommendations, staying just a few days. As a starting point, it might be easier to try this excellent book, Recipes from Corsica by Rolli Lucarotti! (BookDepository, Fishpond)

It must be said that the physical beauty of Corsica is enough to recommend the place in a flash, food or no food. I’ve written a bit more about Corsica on Duncan’s Miscellany.