My kitchen scales battle showed no signs of a Duncan-win following my first article bemoaning the crappiness of many scales and the deterioration of my favourite model. The latter, my once-trusty IKEA model, now resets itself if I plonk anything onto it even moderately hard. Sigh.

In a sign that some companies are being a little more careful in how they approach bloggers, it was more than a relief to receive a commercial email that wasn’t trying to get me to PR-pimp pears or the latest bloody Vegemite to my “interested readers”. Instead, Brad at KitchenwareDirect (one of a number of online discounters in Australia) offered me the opportunity to try out a set of scales from Soehnle, a brand mentioned a few times by my readers. As he was also polite enough to make clear that he wasn’t suggesting a reviewing angle and accepted that I rarely mince my words about products, I accepted the offer of some scales to test.

To recap and update my kitchen scales testing criteria:

The scales I tested were the Soehnle Cuisina, with a raised weighing platform and a plastic bowl which fits on top. It officially weighs to 5000 gm / 11 lb 6 oz (tick) in 1 gm increments (tick), with a minimum weight of 1 gm (tick). Reality comes close to this (see below). The battery is a single 3V lithium button, which means it’ll last a long time, but if it suddenly dies you probably won’t have a spare ready to hand – hopefully the low-battery icon starts to show with enough warning. 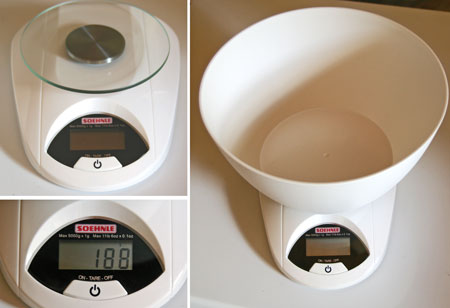 The bowl is a convenient size and shape and sits well on the weighing surface. It comfortably holds at least 2.5 litres. Most of the time I would be using my own bowls, but for simple projects the included bowl is perfectly adequate.

The fact that the clear glass weighing disk sits well above the display is very good (tick), and although the display isn’t illuminated, it was much easier to read than my IKEA scales. The display turns off automatically after 3 mins (tick) or by pressing the button again (tick). If the registered weight is above zero, pressing the button tares the unit. The button had a clean click response. The grooves around the button, as on most similar scales, are a dust/food collector, so I’ll be taping some clingwrap over the display and button. The weighing disk can be removed for cleaning. It’s also handy as a grip for picking the scales up (so maybe I won’t drop them as often as other scales;) ).

Weighing was quick and consistent (tick) across the full range (1 gm – 5000 gm), with additions of large or small amounts giving the expected reading (i.e. putting, say, 5 gm, 500 gm or 5000 gm on the scales and then adding another item of a known weight always gave the expected result). Consistency is good, but that doesn’t say anything about accuracy. Weighing large numbers of Australian coins (which have standard weights), I discovered that the Soehnle Cuisina scales were mismeasuring the weight by about +1.4 gm per actual 1000 gm of material. This is unlikely to be disastrous, except at the pointy end of avant garde cuisine. The IKEA scales remain the ones I’ve tested that are most accurate.

On most occasions, the display settled on the final weight promptly (tick) and it didn’t change thereafter (tick). This was tested by (1) putting a range of different final weights on the scales, and (2) by rapid or gradual addition of material (e.g. pouring liquid into a bowl slowly).

But now for something annoying: The scales don’t register very gradual addition of material when starting from zero. This can be a problem for sprinkling powder, grains, or a gentle flow of liquid. 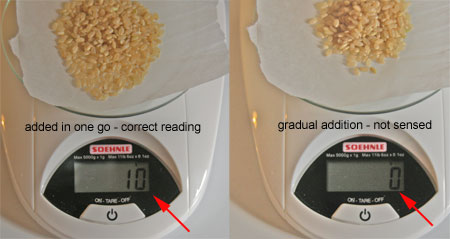 The scales will not register (at zero) the addition of less than 1 gm, or multiple additions of less than 1 gm. My advice: never start by adding small amounts to the scales. Make sure you’ve added a larger amount of material quickly (to get it to a value above zero reliably) before adding any small amounts. Thankfully the problem only exists at zero, while some other scales I’ve tried had the problem no matter what had already been weighed. In tiny print on the guarantee sheet, I found the text: “This scale has an intelligent [sic!] zero setting. This may in some cases when bulk ingredients are poured very slowly cause the display to remain at zero.” Correct.

The scales can display metric or Imperial weights (tick), but unlike many scales this isn’t possible by simply pressing a button. The manufacturers decided that users will only operate in one system (and as long as you’re not an English speaker, that’s probably true), so they stuck a teencytiny switch under the cover for the battery compartment. Grr. If you do like Imperial, however, the weight is displayed to a decimal fraction of an ounce (tick; I won’t comment about the silliness of doing decimals of an anachronistic base-16/8/14/whatever measurement system). 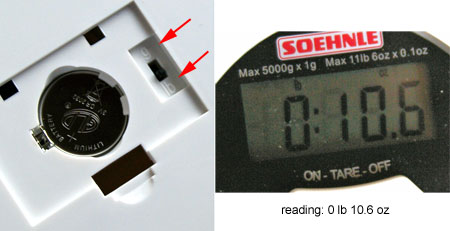 All up, the Soehnle Cuisina scales are good to use and responsive, but – as is common to most domestic digital scales in my experience – a little inaccurate. In this particular case, the innaccuracy is small enough that you need not feel discouraged from trying the Soehnle Cuisina.

My sincere thanks to KitchenwareDirect for providing these scales for review.

(As a side note, I recommend against the increasingly common type of very flat glass scales (like those I rejected in my first article) in all brands. Careful reading of reviews of these on various US, UK and German sites indicates that they all have problems with changes in readings and sensitivity to where items are places on the weighing surface. Stylish looks, poor performance.)