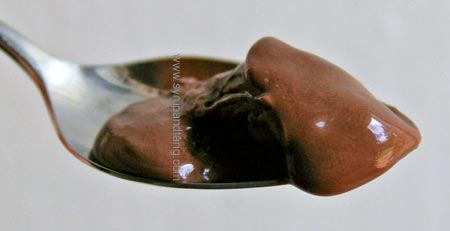 I can feel myself approaching an equipment crisis. My favourite food processor is no longer sold in Australia and spare parts are crazy expensive. My kitchen scales are on the way out. My new spatulas bend too much. And just recently I lost the paddle for my ice cream maker. All such things are discovered at the least convenient moments, and the last two had to happen just as I was reviewing a book on ice cream – Ice Creams, Sorbets & Gelati by Caroline and Robin Weir.

Some weeks after testing a few recipes, I noticed the book had a recipe that ostensibly reproduced the stunning cacao extra bitter ice cream at Berthillon in Paris (see pic here). As that was the most impressive chocolate ice cream I’ve ever eaten, I had to try it at home.

I made the custard. Chilled it for 24 hours. Made sure the ice cream maker’s bowl was in the freezer.

I went online to see if I was misremembering the colour or shape of the paddle while rummaging through cupboards and drawers and down the back of shelves.

In the end, I had a pot of custard and a frozen bowl and no paddle, so it seemed the only options was to try to churn the mixture by hand with a rigid spatula (that’s when I discovered the new spatula isn’t strong enough). Despite only having made a half mixture of custard, this was hard work, especially as you don’t want the mixture freezing solid against the walls of the bowl (that’s why the paddles scrape down the walls and base constantly). Uff.

As much as I complain, it was educational. Doable. And the result was damn good.

At first, the coffee in the mixture was too noticeable and I wasn’t excited. But 24 hours later this had mellowed and probably wouldn’t have been noticeable to new tasters. The final ice cream was dense and rich, beautifully chocolatey and melted superbly. A textural delight.

I won’t reproduce the exact recipe here, but the key characteristics were a basic rich vanilla ice cream custard with quite a lot of cocoa and chocolate dispersed through it, along with some sugar syrup and a small amount of instant coffee. (The cocoa is boiled for some minutes to get rid of the raw taste, and the chocolate is then melted into the milk for the custard.)

Was it the same as Berthillon’s? The potential was there. I used a 55% cocoa solids dark couverture. If I were to make it again, I’d try 70% or so as I think that would get it closer to the mark.

Meanwhile, I’m off to borrow my mum’s ice cream maker from 1985. She still has her paddle.