I was enjoying the comments on the supermarket article so much that I decided not to post until my return for a little travel interstate. Now I bring you new tales of macarons (hey, there’s been a break of over six weeks since I last mentioned them!) and cakes, and some other food observations from Sydney.

There’s a pâtissier in Sydney who has been attracting some attention for his Pierre-Hermé-esque creations, including his versions of my beloved Parisian macarons (too often called ‘French macaroons’). Adriano Zumbo has a teency little shop in trendy Balmain. Along the righthand side of the narrow space is a glass cabinet of high-end patisserie. Indeed, you could almost imagine being transported to an exclusive atelier in Paris. 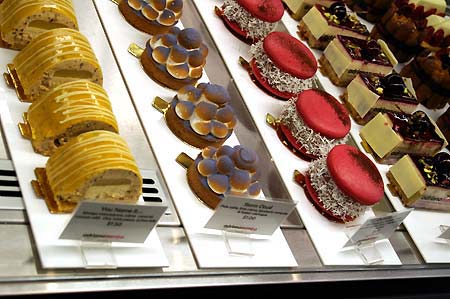 I’ll start with the macarons. There was a range of about ten flavours. I tried chocolate/earl grey, lavender/blueberry, and rice pudding. The macarons had been packed into clear plastic display boxes, making it difficult for the shop assistant to remove them. A number of cracked macarons were visible.

And so to the tasting. Problem 1: some crunch. Problem 2: some hollow shells. Problem 3: hard ganaches. Success 1: well judged lavender flavour (but fleeting blueberry). Success 2: tasty rice pudding filling (but chewiness isn’t necessarily a successful idea in a macaron filling). Zumbo’s macarons are a visual success (mostly), but on the day of this sample, the product was marred by textural problems in both the shells and fillings. The only Parisian resemblance here was the appearance. 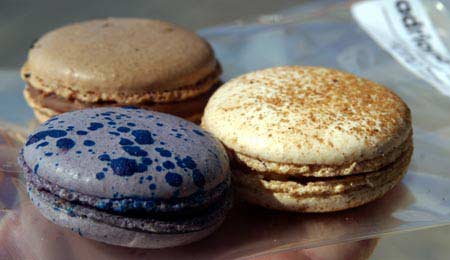 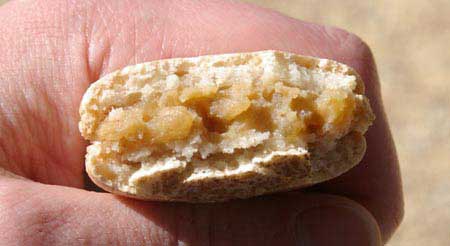 As an aside, Sydney’s seagulls have a taste for luxury goods. Halfway through one macaron I was suddenly swooped upon and a moment later my hand was empty, the macaron gone! Bastard birds! I sat, bereft of macaron and wondering if this was one of those times when a man is allowed to burst into tears in public;)

I also bought one of Zumbo’s cakes. The ‘Ed Knocked Me Up’ sounded both amusing and interesting (walnut and coffee elements). It was quite large (and heavy) for an individual cake and cost about A$8. The caramel dome was beautiful and the modest garnish of a coffee bean and a flake of gold leaf added to the allure.

Numerous interesting elements were revealed with the caramel and the nut-encrusted chocolate girdle. Crunchiness, sponge, biscuit, buttercream, mousseline cream and even a lump of a coffee-walnut ‘compote’ (if I recall the description correctly). This was a very, very difficult piece of prettiness to eat without cutlery, especially with gateauivorous seagulls swooping on helpless tourists.

I was surprised to find that the dome was almost completely mousseline. That’s a hell of a lot of sweet, light and fluffy cream to get through. Too much. For someone who clearly has great technical skill, why did Zumbo produce something that could be characterised as Paris-meets-American-excess? Sure, the high-end patisseries in Paris produce things which can be insipid, or small-delicate-exorbitant, or man-that’s-rich, but rarely do their products give rise to an impression of gratuitous-fat-bomb! I know this sounds harsh, and that tastes may differ, but I felt this was a well made, somewhat busy piece of excess. If the amount of mousseline were halved, it’d be much closer to being an outstanding piece of patisserie. I hope his other creations don’t suffer from similar problems. 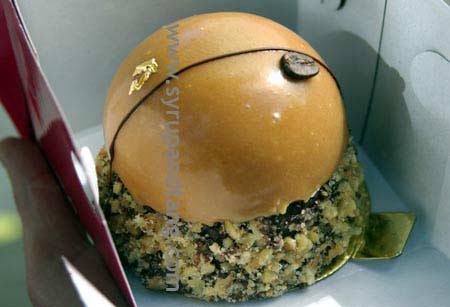 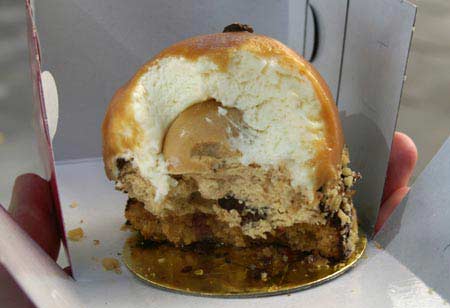 Moving along now… to Lindt’s concept store in Sydney’s Martin Place. This is the city’s other well known venue for macarons. I’ve read a lot of enthusiasm for the Lindt ‘Délices’ (as well as Zumbo’s), but some correspondents have been less complimentary. I chose three flavours: coconut, blackcurrant, and something I’ve forgotten (oops). Fail. Dry and crunchy in the mouth, with a number of hollow shells. The coconut was damp and dull. The blackcurrant flavour was clean and fruity, but marred by a very hard ganache. 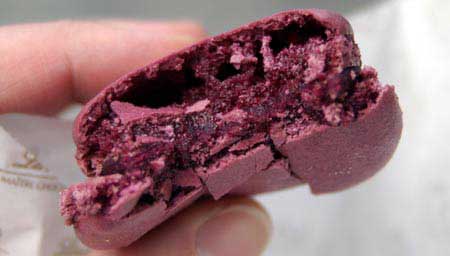 My conclusion on the macaron front: from the Sydney tasting and my review of Melbourne’s macarons, I’ve seen no evidence that there are seriously well made macarons in Australia. THEY SHOULDN’T BE CRUNCHY, GOT IT?! I’ve read claims that David Menard at Noisette in Melbourne can do it, but I’ve not tasted proof, nor had other corroboration of the claim.

Other food in Sydney

With the taste of Portuguese grilled meats still lingering after my travels in May, I headed for Petersham to get a refill. Silva’s (Canterbury Road) is famous for its grilled chicken, but also known for some other dishes. I ordered a bowl of caldo verde (potato, kale and chorizo soup) and a prego (steak sandwich) with chips. The soup was A$9. As I waited, I worried a little that I might not have the appetite for an enormous bowl of soup *and* the main course. No need to worry. The soup turned out to be a very pricey serving. Whilst tasty, it was distinctly meagre for the price. The prego was better, but nothing stunning. So much for the taste refill. Pity.

I ventured out to Bondi Junction for the Thursday Organic Food and Farmers’ Market. A strange market, patently not living up to its name. There was very little fresh produce (three or four stalls), of which most was non-organic and non-farm. One hot-food vendor was refreshingly honest in declaring where there were organic or non-organic inputs. The rest of the small market was a hotchpotch of prepared food (some delicious), non-food stalls and a butcher’s van. Another farmers’ market contributing to the growing scepticism about the concept. A real pity. 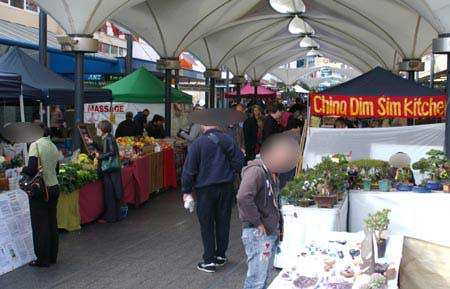 As this was a very brief visit to Sydney, there wasn’t much more scope for eating/dining. Thankfully the remaining experiences were positive. Lüneburger German Bakery is a chain which seems to have appeared since I was last in Sydney, two years ago. The pretzels really are very good, the bread looked great, as did many of the pastry items. I also managed to dine at Chat Thai in Campbell Street without queuing first. I’d read glowing reviews of this small, modern Thai restaurant, but it was clear I’d need to dine at an odd hour if I wanted to have a calm meal. It’s not often I eat lunch at 4.30pm, but this was well worth it. (The only downside was the waitress who coughed repeatedly into her hands, all the while making drinks and handling crockery.) The menu is long and refreshingly interesting (see the website). Many of the diners are Thai. Prices are low. I’d return in a flash. Hell, I’d even queue!

And now I’m back in Melbourne after a fragrant detour to Canberra. More about that soon…

36 thoughts on “Sydney’s macarons, Adriano Zumbo, and a few other eating observations”