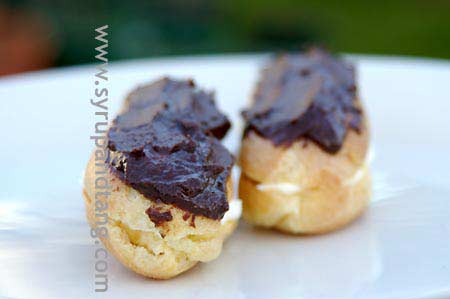 Another month has flown by and it’s time for the August Daring Bakers Challenge. Pierre Hermé’s chocolate éclairs were flavour of the month (from his Chocolate Desserts book with Dorie Greenspan). Recipe and initiator of this challenge can be found at What’s for lunch, Honey? and Tony Tahhan (their posts might appear a little later than mine, as they’re in different timezones).

Choux pastry (pâte à choux) isn’t something I do often. In fact, when my sister heard I’d made éclairs her first reaction was ‘that’s not very you’. And indeed, it’s probably 15 years since I last made choux pastry! It’s not so hard, though the process certainly seems daunting when you read recipes. The tricky bit is getting the puffed-up shapes to stay puffed up, rather than causing deflation traumas (see Thanh’s recent adventure).

Choux pastry is soft and pipeable. It’s made by adding flour to boiling liquid and butter, stirring vigorously, and then adding egg yolks (and/or whole eggs) gradually (ok, that’s just a summary). In the oven, the piped shapes swell and rise, but lose their shape easily except when very small. So profiteroles (1, 2) are usually fairly safe, but larger shapes deflate easily. You have to find a way to let the cooked dough firm up without all the steam inside causing it to go soggy and collapse. Typically you either leave the cooked shapes in the residual heat of an oven, or you puncture the shapes to let the steam out (of the side or bottom).

I was being a little impatient, so suffered about 50% deflation in the batch. (And we won’t talk about the effect of impatience on the chocolate glaze either!) But it was then that I discovered how well collapsed éclairs function as a churros substitute! Marginally healthier too;) 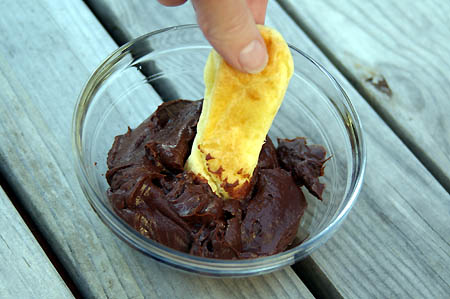 Choux pastry needs to be used promptly or frozen in its final shape. Cooked shapes can be frozen or refrigerated, but can be a little soft or leathery as the dough absorbs moisture from its environment. Often you would ‘refresh’ the stored shapes in the oven before use, just to bring back a touch of crispness.

I decided to make the éclairs for my parents, who had both been down with the flu all week. Mum event leant me her much-neglected éclair tin! Dad can’t eat richly chocolatey things, so I replaced the chocolate pastry cream with mandarin/vanilla whipped cream. A chocolate glaze was still used. 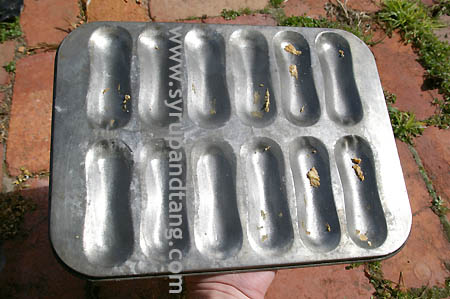 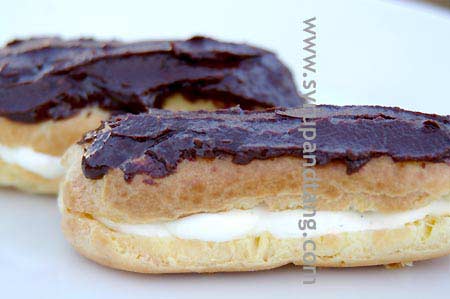 Hermé’s choux pastry contains more egg yolks than many typical recipes. It tasted strongly eggy and this was commented on in the Daring Bakers forums. I certainly wouldn’t use this recipe in the future, as such strong egginess needs a rich foil (such as his chocolate pastry cream) to balance it. Nonetheless, a tasty and interesting challenge!