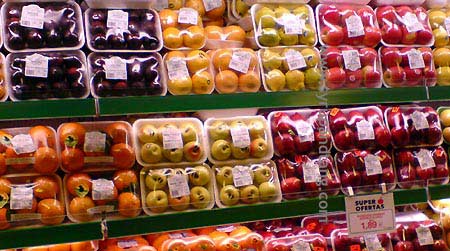 Once upon a time there were no supermarkets. Most people who have grown up in Australia have forgotten or never known a life without sheds filled with neat aisles of groceries and the ka-ching! (or bloop!) at the checkout. As tourists or concerned consumers, many of us love produce markets and some of us regard supermarkets as fairly evil, but we are still largely dependent on a lifestyle with supermarkets close to the core.

What role does the supermarket play in your practical life and in your issues-driven decision-making?

I’m going to list a few of the many issues surrounding supermarkets and my own feelings, then invite comments.

It can be argued pretty well that supermarkets in Australia:

(-) are greatly responsible for the pervasive consumer obsession with low prices
(-) strongly distort the retail market, imposing restrictive supply and pricing arrangements on producers/manfacturers
(-) make massive profits while claiming to be working in the consumers’ interest
(-) often charge much higher prices for fresh produce than small retailers or markets
(-) promote convenience and price, often at the expense of quality and, increasingly, variety

It could also be argued (though opinions are more likely to differ) that supermarkets:

So what do I think and do?

We’re spoilt for choice and seduced by cheap goods, sometimes so cheap that you doubt whether the supplier actually gets more than a cent, gross, for each unit. None of this is transparent – I can’t know whether a house-brand item at $1.50 is of more benefit to the producer or manufacturer than the $1.95 other brand. I don’t know whether a cut-price special is a loss-leader for the supermarket or a massive discount extracted from a supplier. In general, I make my choice based on quality or a measure of price-quality-conscience based on my budget.

I try to buy Australian rather than imported products, except where a local equivalent is too poor to compare. (A difficult decision, and different people will have different thresholds, of course!)

I have no loyalty to a particular supermarket chain because I’ve heard enough stories from suppliers about how each chain controls the availability of products and makes it hard for new products or small suppliers to make it onto the shelves (shelf space is often bought by manufacturers).

I try not to buy fresh produce of any sort from the supermarket.

I would like to be able to buy more fresh produce from quality suppliers with a good approach to their livestock, their producers and/or the environment. Often this isn’t possible because I can’t easily buy bulk. My work schedule frequently gets in the way of going to markets. And my budget often makes it impossible to go for the choices I would prefer. (For those of you with the space for bulk purchasing or looking for alternative sources, A Goddess in the Kitchen has a good post which mentions in the comments some suppliers worth considering (Rutherglen Lamb, Aussie Farmers Direct).)

So what about you?

Do you try to avoid supermarkets or embrace them? What solutions work for your ethical, environmental, or personal perspectives? Remember, the focus here is on supermarkets.

[Note: A few valuable comments on this theme after a previous article may have been drowned out at the time, so those readers are welcome to repeat themselves here if appropriate.]

24 thoughts on “What role do supermarkets play in your life?”