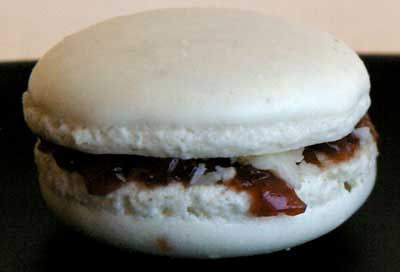 Thirty-five degrees Celcius and counting. What better way to sweat to death than whilst writing about macarons de Paris? Again.

I can’t make macarons today because the heat in the kitchen would make me droop like Safeway’s out-of-season asparagus. It’ll be 40C by lunchtime (that’s about 475F for dark-age foreigners). At least the humidity ain’t so bad.

This has been my month of the world’s most temperamental type of macaroon… La Macaronicité at Syrup & Tang, as I dubbed it, which tried to cover almost everything one might need to know without me actually excising the reader’s creative spirit. Time to squidge everything together with scrummydumtious fillings and go on a picnic.

* Vida was brave/impatient enough to accept my challenge to try out Shannon Bennett’s recipe in his book My Vue. I didn’t think it would work (too cool, too damp) and brave Vida confirmed privately that chef Bennett’s restaurant hats (stars) ought not apply to his macaron recipe… disaster.

* Thanh of I Eat Therefore I Am was the other impatient soul who launched into the task with gusto. He tried the simple recipe (French meringue) and was disappointed, almost throwing in the towel. Then he tried the advanced recipe (Italian meringue) and his cries of joy could be heard from afar. Then he was overcome by Christmas pressures and almost had a nervous breakdown as he juggled macaron mixtures after midnight.

* Towser at Spot4Nosh emailed me and subsequently published his adventures with macarons and, teething problems aside, also produced some lovely macarons.

I hope more will take up the challenge. I know there are others in Australia who make macarons independently of my exhortations, including Ellie at Kitchenwench who has also written about them, Mellie at tummyrumbles who has also made them and Y at Lemonpi who apparently makes them in her dayjob occasionally but doesn’t actually love them in the way some fanatics (little old me) do.

In the other parts of the La Macaronicité series I’ve linked to bloggers/sites elsewhere who offer inspiration and useful information. You can surf the web and you’ll find more writings. I’ve probably missed one or two really good ones, perhaps forgotten a classic here or there, but I’ve also deliberately omitted some because they don’t acknowledge whose recipe they’re using (which I think is very bad form).

I haven’t written about chocolate macarons. I originally contemplated a special article on them but decided there wasn’t much point — although the internet shows many comments claiming chocolate macarons are the hardest to make, I simply can’t agree. I’ve had no problem making them with the Italian meringue method (just reduce the other dry ingredients slightly to compensate for the cocoa) and even the French meringue method worked well for me (and David Lebovitz has had many complements for his recipe).

One of my commenters, DC, mentioned that there are now a number of books in French about macarons (I think I saw four earlier this year in Paris), and more interestingly, he saw one addressing the issue of failure. I think we all know by now that making macarons involves a certain amount of wastage, with singed edges, soggy middles, wrinkles and more (including tears). I wrote about an alternative use at the end of the second part of La Macaronicité and look! I now have pics: 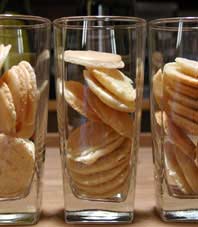 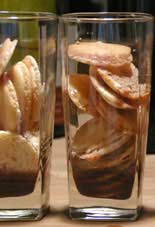 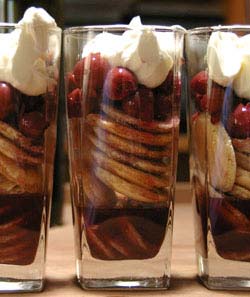 This was Christmas pudding-ersatz (my mother’s kitchen is under renovation so it was a slightly alternative Christmas dinner this year). Macawrongs + port + morello cherries + cherry juice + lightly whipped cream.

Thanks to everyone for their comments and questions. Don’t hesitate to add more as time passes.

The delicate divas have left the building… (wearing sunscreen and floppy hats to ward off the sun).

Can you guess what flavour the macaron below is?