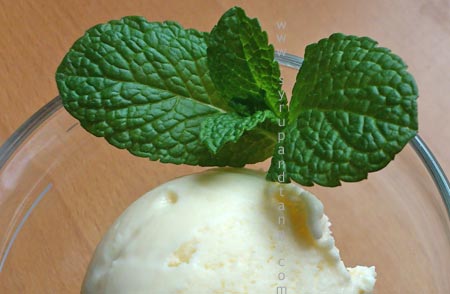 Have you ever met one of those people who looks ascance at you when you suggest having an ice-cream in winter? “But it’s 8 degrees and raining!” they exclaim. So bloody what? Ice-cream can be the stuff that dreams are made of, so of courrrrrrrrrrse you should eat it all year round.

When I first visited Germany it was mid-winter and verrrrrrry blllloody ccccolllld. Didn’t stop me buying a Cornetto, but! (The shop owner almost did, as I learned abruptly that customers d o  n o t get to open the ice-cream cabinet for themselves.)

So here we are at the winter solstice (in the southern hemisphere). As I haven’t tried enough recipes from the ice-cream book I reviewed a few months back (Ice Creams, Sorbets and Gelati: The Definitive Guide), and because KitchenwareDirect were nice enough to send me a new ice-cream maker to try out when they saw that I’d lost the paddle for my old one, I decided to do a flavour that straddles ideas of cold and wishes for warmer weather: mint.

Mint in any dessert can range from sophisticated and warming to sickeningly sweet and cloying. Anybody who pairs milk chocolate with mint, for instance, probably deserves very painful punishment, especially if the mint is communicated through little flavoured pieces of candy in the chocolate. Blurk. Ick. Pfahhg.

A dark chocolate is the way to go, but I don’t think you need to prefer the darkest on the spectrum – a good dark chocolate in the 50-70% range is appropriate for most applications. If you use fresh or dried mint, things get especially interesting and complex. One of the most surprising macaron flavours I did last year for Café Liaison used dried peppermint in a dark chocolate ganache. In the ice-cream here, I used fresh common mint straight from the garden.

The machine I’m now using (on the left) is a Cuisinart Ice Cream, Yoghurt & Sorbet Maker, 2-litre capacity. It’s stylish stainless steel looks aren’t quite matched by performance, as I found a full 2-litre batch didn’t freeze well enough on a warm autumn day, but it did well for a 1-litre batch in winter. (And let’s face it, probably all ice-cream maker ice-cream still kicks store-bought ice-cream out of the water!) 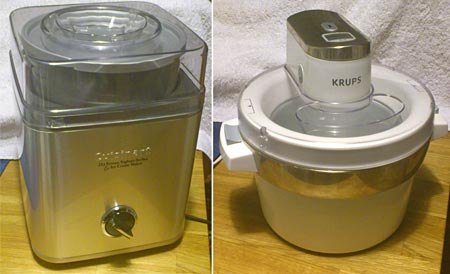 The mint ice-cream from the abovementioned book combines a fairly standard French-style egg custard with some sprigs of mint. The mint steeps in the cooling custard for an extended period, after which the mint is squeezed and the custard strained, the cream added, and the mixture churned. The authors’ recipe for 800ml of ice-cream used four 10cm sprigs. I upped that to five and it could possibly have been taken further.

The Cuisinart uses a rotating frozen bowl with a fixed paddle, rather than a rotating paddle inserted in a frozen bowl (as in my older Krups model, also pictured). The Cuisinart design – now quite common in ice-cream machines – seems to make for a noisier experience. I wouldn’t have wanted to be stuck in the kitchen while it churned a full mixture! Alas, the quite clever paddle (you can see it directing the flow in, out and up) is an absolute bugger when it’s time to decant the ice-cream into a container – too much surface area picking up the fresh ice-cream as you withdraw the paddle from the container, and many angled and bumpy surfaces to try to get that ice-cream off. I also found that it didn’t scrape the sides and base effectively enough while churning, leaving a 2mm layer of hard-frozen butterfat and custard (and no hard spatula is supplied to scrape it off). 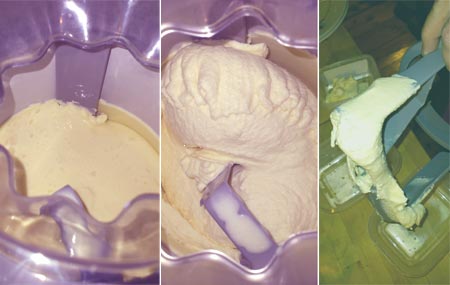 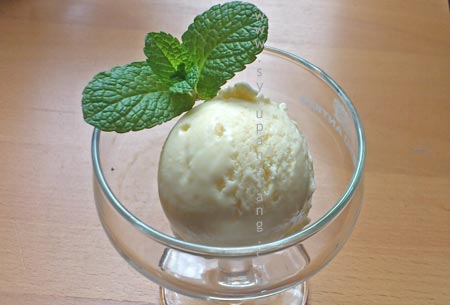 The outcome was a smooth, wonderfully delicate mint ice-cream, lacking any giveaway green tinge. I had intended serving it with a chocolate sauce, but it would have been overpowering. A dusting of powdered cocoa might have done the job instead!

The next mint escapade will be with peppermint (once I’ve grown some!).

Notes about choosing an ice-cream maker: how well a machine performs is impossible to tell just by looking at it. I strongly recommend reading reviews or asking among your friends – even fancy, expensive models with their own compressor aren’t always reliable. As long as you don’t expect to make ice-cream without forethought, the common and fairly affordable machines with bowls that need to be frozen for 24 hours before making the ice-cream are a good way to go, but I do recommend making less-than-maximum sized batches in order to reduce unhappy sloppies. It’s also advisable to chill the mixture in the fridge for many hours beforehand.

In the case of the Cuisinart, the customer reviews at KitchenwareDirect are strongly positive (aside from the machine noise), but I am less positive – it does the job, but could be better. Both my now-paddleless Krups model (GVS2: highly rated on Amazon Germany) and my Mum’s 1985 Phillip’s machine (still going strong) are more effective at cleaning the sides and slightly quieter, but as Krups appliances are no longer readily available in Australia… Sniff.

My thanks to Brad at KitchenwareDirect for providing me with a new ice-cream machine.