The lure of supermarkets and convenience stores is irresistible when I travel. The novelty of different packaging, mysterious powders, new chocolate brands (mostly disappointing), and the cornucopia of snackfoods can keep me entranced for ages. I have enough trouble escaping from Tatsing (Newmarket) or Minh Phat (Richmond) and neither of those are new to me! But it’s the extra weight in my luggage when I fly my way home that really shows the lure of new things. 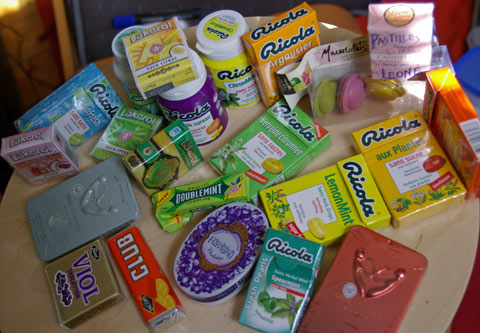 Before recent travel I thought it time to examine my Shelf of Travel Food Mementoes. The intention of the shelf was originally to encourage me to sample and continue to eat my way through the collected bounty, but I seem to have failed, as many years’ travel appears to have accumulated without sufficient attention from me. 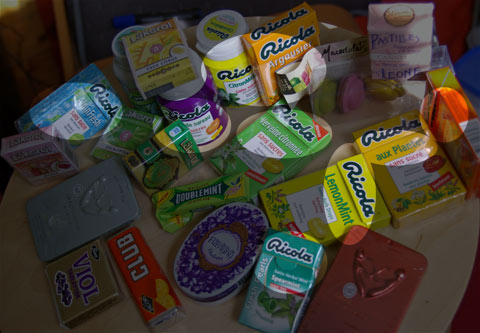 You might notice, for instance, an abundance of Ricola lollies. There’s aux Plantes, Verveine citronée, AlpinFresh, Argousier, CitronMélisse, Fleur de sureau, OrangeMenthe, Spearmint Fresh Pearls and LemonMint. The Frenchie ones were acquired in France (2009) when I was on the wave of Ricola discovery (I didn’t use to like hard sugary lollies, but times changed and long-ignored products suddenly caught my attention). Little did I know that what I thought was a very narrow range of Ricola in Australia (thank you, Coles), was nothing of the sort. I returned from travels to find the Reject Shop selling most of the above flavours in English 😉 for half the price! Of greater embarrassment than this, however, is the fact that most of the packets were unopened when I took this photo, despite having been bought over a year earlier. Tsk tsk. At least the Spearmint Fresh Pearls were only about eight months old (Kuala Lumpur in October)… still unopened. 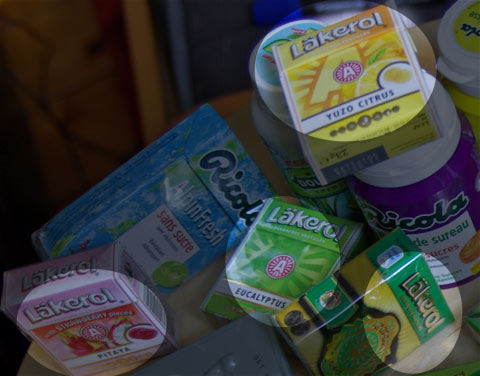 Meanwhile, from Sweden (also 2009) are Läkerol, a few flavours of which are found at IKEA in Australia. But mine, collected in the “home” country are the rather tasty Yuzo Citrus (yes, opened that one), and the as-yet-untasted Eucalyptus, Pitaya (dragonfruit) and Licorice-Watermelon. Actually, I just opened the Pitaya and discovered that it comes “with strawberry pieces” and tastes, um, sweet and acidic and lightly perfumed. It’s lucky that chewy lolly connoisseurism isn’t a big thing, or Läkerol would have to try a little bit harder (and who would try to seriously capture the flavour of dragonfruit??).

I rarely use chewing gum, but new flavours always catch my eye. Fond memories of a Wrigley’s sage and lemon chewing gum linger from a trip to, um, the Czech Republic I think (I found the almost empty package in the bottom of a laptop bag the other day… too gory to reveal to you here). In the picture below, however, you see Green Tea Mint chewy (foul) and Lemongrass (obscured at the top) which was new in Malaysia last year (and rather difficult to find once I was addicted). 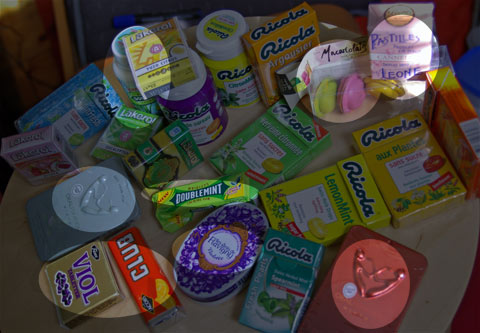 On the top right we have the rather awful pseudo-macarons made of fruit-flavoured chocolate from the otherwise excellent Michel Cluizel. They were awful when I bought them, and over a year later they were downright spit-out-able (I know, should have chucked them out a year ago). In complete contrast, the neighbour in the photo are tasty little cinnamon flavoured Pastiglie Leone. I have a few half-eaten packets of other flavours from previous years lying around the house. I emphatically do not recommend the green tea “Tuareg” flavour, astringent enough to shrivel your tastebuds for a day unless you’re a hardened green tea lover! Putting that flavour to one side, I was delighted to discover that you can find these pastilles in Australia — on a visit to Liaison café in Melbourne I saw an artfully arranged pile of boxes.

The coloured tins with heart-shaped figures are OralFixation Mints from the US (but bought in Malaysia). I’m a sucker for small tins, and US sweet and gum manufacturers are great at feeding my fetish. (Come to think of it, a star in the tin world is Altoids, actually British, but better known in the US.) Anyway, these OralFixation thingies in cinnamon (yum, but not steroid-strength like Altoids) and green tea (meh) are very stylish.

Almost finished, and we have three favourites at the bottom left. Starting with the childhood nostalgic disappointment is the Jacobs orange Club biscuit. Knowing that, as a child, I loved the greasy chocolate and the gritty biscuit just didn’t save them from disdain. Having bought a six-pack with glee at Tesco, most of them lay unloved at the back of the shelf, with good reason. Then there’s the Fazer Viol licorice chewy lollies. Lovely. Clear violet flavour. A pleasant suck. And finally, childhood hit and enduring favourite, violet flavoured Anis de Flavigny — hard, lightly fragranced sugar balls with a smooth exterior and a tiny aniseed in the middle.

I know of many others who hoard tasty treats (flavoured KitKats seem to be a recurring theme among bloggers), but most do manage to devour their bounty within a brief time. What do you hoard from your travels and then find months or years later?

8 thoughts on “Hoarding food novelties from my travels”