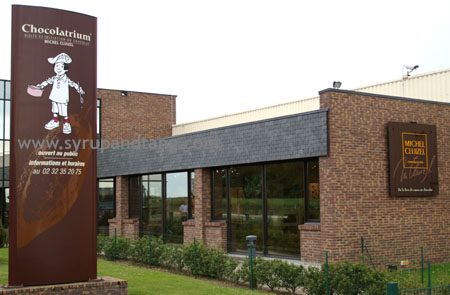 I’ve never been to a chocolate factory. In the role of the prizewinners in Charlie and the Chocolate Factory, I’ve long dreamt of bathing in couverture, taking illicit bites of bonbons on the production line, throwing annoying Oompaloompas into a vat of boiling sugar syrup, and more. Even in a chocolate loving place like France, access to chocolate factories is limited. Valrhona only opens its doors to the elite. Meanwhile, Michel Cluizel lets you onto their property, but limits visitors to a museum, the “Chocolatrium”.

The Michel Cluizel factory is located in Damville, about an hour’s drive west of Paris. The town is virtually inaccessible by public transport (plans to visit two years ago were scuppered). And is a mysterious Chocolatrium worth visiting anyway?

Knowing that there was some risk involved, my trusty Parisian correspondent, Harry de Paris, and I set off in our own vehicle and incorporated the attractive nearby towns of Evreux and Dreux in our sightseeing plans.

In typical French fashion, the Chocolatrium’s shop is closed for lunch. This we knew in advance. We didn’t know, however, that the open chocolate workshop would take lunch at a later time, about 45 minutes after the shop had reopened. This can make an early-afternoon visit rather disappointing. Luckily we arrived about 20 minutes before workshop lunchtime and were advised by the friendly lady at the desk to rush through to the workshop’s viewing room before viewing the first two parts of the place.

Entry to the Chocolatrium costs EUR 5 and the museum (for want of a better word) consists of at least three areas (I have no memory of a fourth area, described on their website as “an old-time workshop”).

The first area is a display room with storyboards and cartoons explaining the history of chocolate (in French and perhaps some English), and a number of display cases with various chocolate paraphernalia (partially labelled in English). The storyboards aren’t bad and cater reasonably for kids and adults alike. It was interesting to read a potted history of chocolate not long after wading through the enormous book Chocolate: History, Culture, and Heritage for a review over at The Gastronomer’s Bookshelf… and kind of a relief to see it in short form.

After the display room was a small film theatre where a somewhat interesting video about Cluizel, the family, business and chocolate manufacture was shown. In French, even the completely monolingual non-French speaker would (a) appreciate some of the info conveyed by the images, and (b) realise that the film was groan-inducingly self-promotional at times. Nonetheless, it was interesting seeing different types of pods and the drying process. Some images of the manufacturing process were also enlightening. 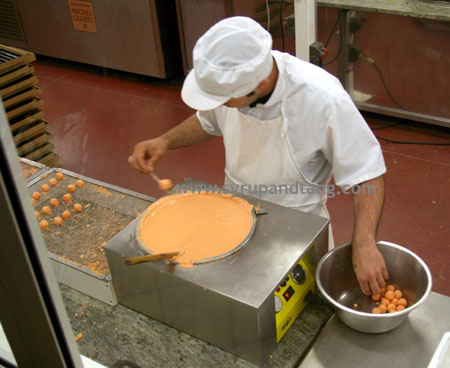 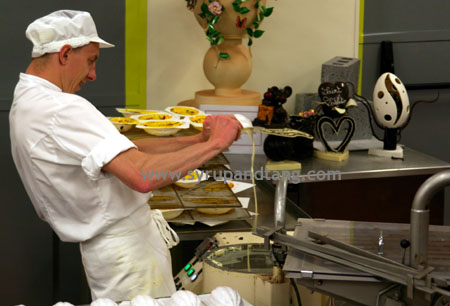 Finally, visitors walk into a glassed-in raised area overlooking a small workshop where three staff were making or processing chocolates. One guy was lining cocoa-pod shaped moulds, another was coating balls of ganache in white couverture and giving them a spiky pattern, while a woman at the back was doing the thrilling job of packaging foil-wrapped chocolate fish into tins. Not scintillating, but still, it’s not everyday you get to see pots of molten chocolate or, as one young visitor exclaimed, “Maman! Une piscine du chocolat!” (Mummy! A chocolate swimming pool!) as she watched the conching machine. I was inclined to agree with the sentiment, as the delicious aromas lured me into thoughts of a chocolate hot spring. 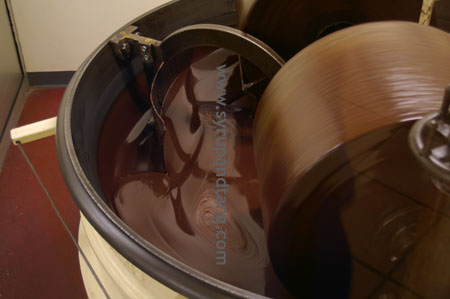 And then it’s consumer time. A large, sparsely adorned shop stocked most of Michel Cluizel’s packaged products, from blocks to boxes of pralines to cute sampling boxes (including a nugget of cocoa butter) and more. Prices were good — at or lower than the lowest prices in Paris. This was a surprise, as Michel Cluizel’s own shop in Paris was selling the blocks at considerably above typical retail price last time I visited. Every visitor gets to choose a free gift and one of the options, a small box of pralines made in the workshop, is probably compensation enough for the entry price (though unfortunately they all tasted largely the same, despite different appearances).

The Chocolatrium is a strange affair. It’s kind of fun, but definitely not worth a trek out to Damville if you have no other activities/destinations in mind. It’s nice, at least, that Michel Cluizel has created something for the public, even if a bit gimicky. We chocolate lovers do, after all, like to have chocolate dreams.