Many of my readers know of my macaronic obsessions (eg, here, or here, or here). As the latest batch, made for the foodblogger get-together in March, was well received I thought I’d publish some pretty photos of them and tell you more about the flavours. 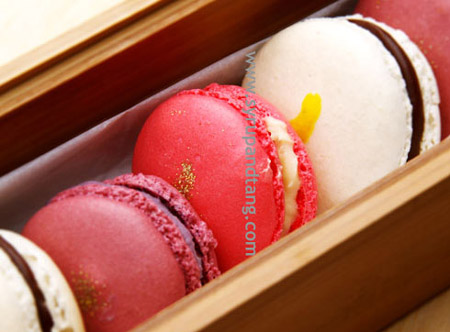 Chocolate-passionfruit: now a classic flavour made famous by Pierre Hermé, this combines a milk chocolate ganache with passionfruit juice. You need flavoursome passionfruit in order to capture the real fruit flavour, otherwise all you get is acidity. I decorated the white shells with a bright yellow dot. You can’t just paint liquid colouring onto piped shells, as it creates a weak point in the shell from which mixture can erupt during baking. Instead, colour a few teaspoons of the macaron batter in a small bowl, then apply to freshly piped shells.

Violet: one of my favourite flavours, it’s difficult to capture it in a clean, strong form. I’ve tried a few methods and have been happiest with a light buttercream. In this case, I used a white chocolate ganache instead, but the flavour of the chocolate dominated. The ganache was pepped up with violet syrup and violet liqueur, but even then the ganache was only faintly violetty. It was also very soft and I used very fine almond meal to stiffen it a little. A number of macaron fillings use almond meal in this way, but they aren’t often written about. Most eaters wouldn’t notice the slight texture of the almond.

Cinnamon-peach: for these, I roasted thin slices of peach in a slow oven until they were quite leathery but not hard. I cut the slices into fine slivers. I then made a white chocolate ganache, simmering cream with a piece of cinnamon stick before adding the cream to the chocolate. The ganache develops a delicious fruity note of cinnamon. Many people don’t immediately identify the flavour but know there’s something fragrant there. The peach slivers are added to the chocolate and cream. This was a delightful, brightly flavoured ganache that I would happily make again. It seemed to be the most popular. 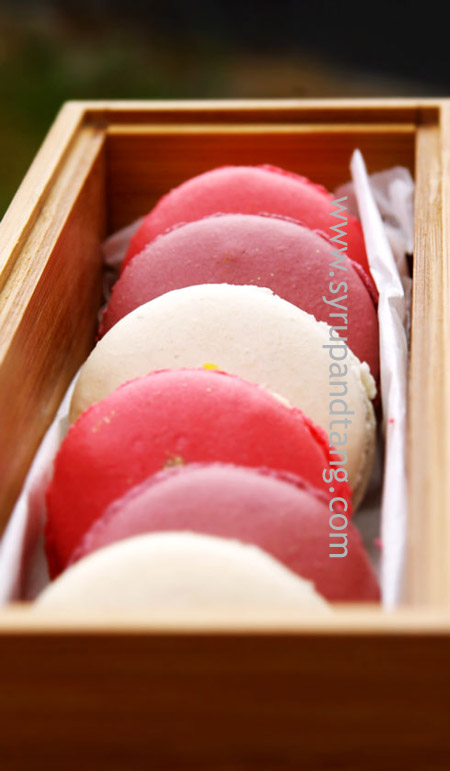 This batch of macarons was one of the most attractive large batches I’ve made. The feet were consistently quite high (something my oven doesn’t always give me) and the shells were just the right texture. If you want to make macarons, it’s worth reading my guide to macarons, La Macaronicité, and if you’d like to see an English-language review of Pierre Hermé’s book Macaron, we published one a few days ago on The Gastronomer’s Bookshelf!

By the way, for those of you who sometimes end up with a too-stiff mixture and are afraid of mixing further, I recommend adding a teaspoon or two of eggwhite (normal, not whipped) and mixing in quickly and gently. It seems to be a very effective repair — much more attractive than thick, lumpy macarons with piping nipples. 🙂

14 thoughts on “Three flavours of macaron”