Ten months after I last donned my patissier gear and squeezed out a few hundred macarons, I returned to the piping bags for a brief baking blitz.

The six months in 2010 spent making macarons during almost every spare moment was exciting, stimulating and backbreaking. It took a month to get rid of the aches from all that piping!

Most people who turn a passion into a business find the enjoyment wanes massively. Thankfully this didn’t happen for me – the creative expression outweighed the burden of production, but I was approaching complete exhaustion by the end of those six months. Unable to transition rapidly from small-scale to medium-scale production, hanging up the piping bags was the only viable outcome, but I hadn’t anticipated a baking hiatus of ten months even for personal consumption.

Most of 2011 has been incredibly busy for other reasons (and in fact there’s been much less exciting cooking this year in general for me), so macarons just didn’t get a look-in until my co-eater Mittens’s cousin announced it was time for a baby shower.

Resuscitating my macaronic neurons was a lot slower than I thought it would be, and it took easily twice as long as it should have to make a small batch. I felt a bit like a pudgy former Olympian reentering the pool! Much to my relief, everything did come together smoothly, including two of my favourite ganaches, known as DARCY and DAVID: vanilla and cocoa nib, and dark chocolate and raspberry. Yum.

My back hurt for two weeks.

I still love macarons, though they haven’t had much of a mention this year… And of course my baking passion doesn’t stop there. Here’s a derivative of Belinda Jeffery’s one-pan mocha cake (from her fantastic book Mix & Bake), reworked with cinnamon dark chocolate ganache and rose geranium flowers (edible). Beautiful. 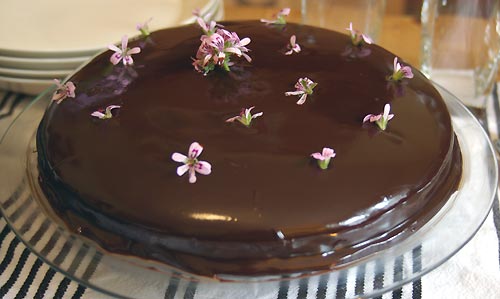 7 thoughts on “OMG I can still make macarons!”