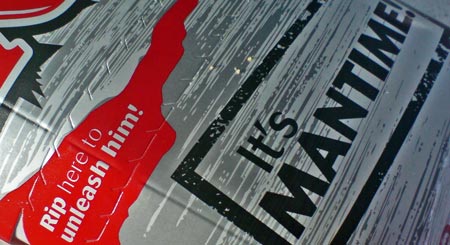 As far as I can recall, I’ve never voluntarily entered a KFC “restaurant”. It’s not snobbery. It’s revulsion. The same revulsion I experience when contemplating a McDonald’s or Hungry Jacks/Burger King. Occasionally, social pressures mean I have to tag along. Sometimes it means I eat a piece of chicken.

If you have to dine in the enemy’s clutches, you might as well make it an experiment. As KFC’s “The Double” (known as the Double Down overseas) is the latest nutritional-outrage-fuelling fast food product, it seemed like an ideal target for the second epsiode of Duncan’s Degustations!

Marketed as “manfood”, and characterised by the use of fried chicken fillets in lieu of the customary burger bread (enswathing bacon, sauce and cheese), the product is the perfect object of loathing for seemingly every anti-chauvinist and every nutritional nagging person. 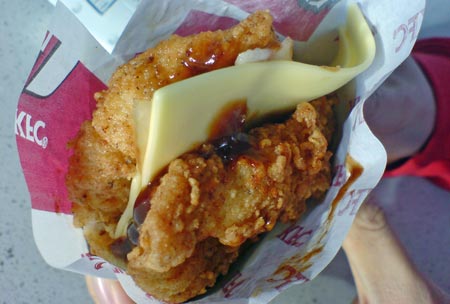 Okay, so the bread is gone, leaving only moist or fatty elements. If someone tells me that the outer elements are fried chicken, I would anticipate some crispness or textural contrast. Instead, there’s moist chicken coated in a very thin layer of soggy “crust”. You bite into The Double and it’s, um, almost denture friendly. Soggy “crust”, moist chicken, thin slices of fast food cheese (not at all as putridly foul as the McDonald’s version), some thin slices of bacon, all kept together somewhat by sweet, characterless BBQ sauce.

Except for its novelty, this product is neither daring nor delicious. Even real KFC lovers would be somewhat disappointed, I think. It’s a dull gimmick.

As for the much criticised nutritional aspects of the product, there’s not much reason to lose sleep over The Double either.

KFC’s The Double weighs approximately 212 gm, which is not excessive for a light fast food “restaurant” meal. The sodium levels are horrendous, even compared to many other products at KFC, but the total energy isn’t markedly different from KFC’s products of equivalent weight and carbohydrate is in fact lower, thanks to the absence of any bread. Naturally, add-ons would change the total meal values, but that’s too variable to consider.

I can see no reason to eat this product, but no doubt many people will try it once. There’s no point in journalists and nutritionists harping about this particular product, as in most regards it’s no more unhealthy than the other high-fat, high-carb, high-sodium, low-fibre stuff from fast food “restaurants”, which the typical eater will return to once they have tried the new and novel.