I’ve long been in awe of your ability to sell buckets of ready-to-use frosting to the masses. I can remember how Australians called it icing, too, before you (or cupcakes) arrived.

The idea of tubs of icing fascinated me. It seemed naughty, perverse, and maybe a bit like dipping into a pot of yumminess. But I never tried it.

I’m writing to you, Ms Crocker, as part of the opening episode of a new occasional article series on Syrup & Tang, called Duncan’s Dégustations. As a public service (or personal torment) I’ll be exposing myself to foods I would normally be sceptical about for one reason or another, just to see if my prejudices are unfounded. I’ve chosen one of your products as my first subject. 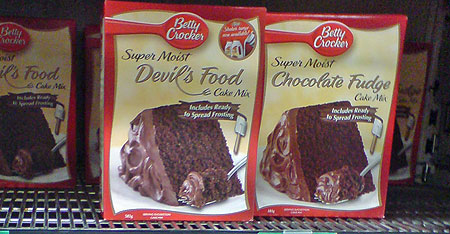 I haven’t made a packet cake since, oh, about 1986, and even back then I could tell that my Mum and White Wings had rather different concepts of “cake”. For one thing, there was that signature artificial taste and smell, slightly metallic, and a little reminiscent of some plastics. There’s been seemingly no decline in the popularity of packet cake mixes, and the daredevil in me decided I just had to try one in 2011. Surely, surely, the intervening years would have seen such a rise in food technology skill and knowledge that a packet cake could, in fact, achieve some deliciousness, Betty?

Now, I noticed you have three types of chocolate cake: Super Moist Chocolate Fudge Cake, Super Moist Devil’s Food Cake, and Decadent Chocolate Mud. I can’t say that your boxes were at all informative about the difference between these, and the ingredients lists were so similar (apart from chocolate chips in the mud cake, if I recall correctly) that any product differentiation seemed to lie largely in the names. I chose the Devil’s Food Cake. 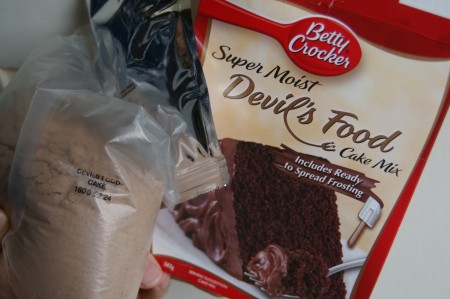 Now, Betty, I know you’re a figment of someone’s imagination, and your real-life minions at General Mills aren’t likely to be letter-readers, so permit me to cut to the chase. My co-eater Mittens and I made your cake. It was, indeed, very pleasantly “moist” in the mouth (though to be technical, moist relates to moisture, not the soft, oily nature of your cake).

I tried it out on my Mum, without telling her that it was cake mix cake. She was very polite about the texture. That’s all. Then she asked me if it was a packet cake.

Ms Crocker, we found your cake bitter, undersweet, not particularly chocolatey, and a touch metallic. In fact, in most regards it was very much the same as the packet cake I made in 1986. What’s more, the stingy portion of frosting you included (that sachet doesn’t stretch very far now, does it!) did nothing to make things better. It’s disappointing enough that the frosting only stretched to the thinnest of coatings, but why did it have to taste salty and (again) a touch metallic? Is this the foul substance people buy in those tubs, for reasons that now entirely escape me?

Mittens wonders what differentiates your cakes from the likes of, say, this: 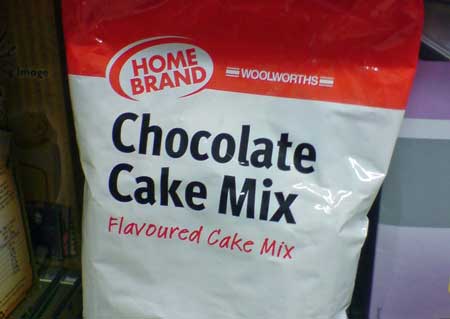 I would be ashamed to serve this sorry excuse for cake. Your website says its “Made in Australia from the best quality ingredients we can find in Australia and around the world to deliver a superior product”. Try harder, Betty.