I’m not a fan of small pieces of meat on the bone. Chopped up duck, chicken wings, ribs, bak kut teh… I’ve never enjoyed chewing modest amounts of meat off bones. For years I ignored a cut of beef – short ribs – believing it would have, well, ribs in it. Duh. In fact, the short rib cut is often sold boneless in Australia, leaving just luscious layers of very flavoursome beef and quite a bit of fat. This cut is the relatively thin layer of meat that covers the outside of the ribs of the animal on the side of the ribcage, beyond the fleshier back areas (with thicker bone) used for cuts such as Scotch fillet (rib-eye) or rib roast.

While I was working on my Where are the Good Meat Books? feature on The Gastronomer’s Bookshelf, I came across a recipe for Korean-style oven-browned short ribs in one of my favourite meat books, The Complete Meat Cookbook by Bruce Aidells and Denis Kelly. It sounded very tasty, so it was time to get ribbin’. The outcome was nothing short of heaven. Fatty heaven, but heaven nonetheless. 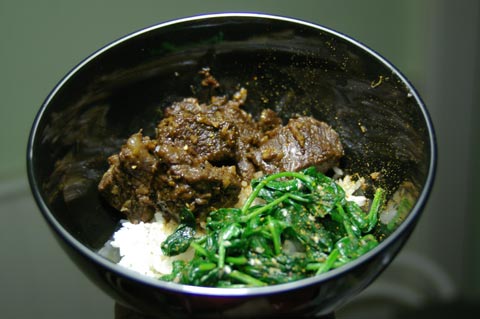 The idea is to braise rib meat with lots of garlic and ginger until tender, then roast the pieces of meat in a hot oven until they crisp a bit. I must admit that, despite making this dish four times, I’ve never done the final step. It’s just too delicious in its braised form that I didn’t bother with the final oven crisping!

You can use bone-in or boneless short ribs. Trim them of excess fat and cut into largeish mouthfuls. Pop them in a good braising pot (cast iron is great). Add lots of ginger, garlic, soy sauce and some brown sugar, spring onions (scallions) and a little vinegar or lemon juice. Add water to cover the ribs. Simmer uncovered until the meat is tender (may take two hours).

Towards the end, you’ll need to stir more frequently as the moisture evaporates and things stick a bit. The amount of fat which renders from the rib meat is considerable and means that you get that lovely rich browning that readers might know from some south-east Asian beef curries/stews. The result is a dish with a deep, aromatic savoury-sweet profile with tender chunks of meat that separates into coarse layers. Rounded off with a little sesame oil at the end of cooking, it’s fantastic. 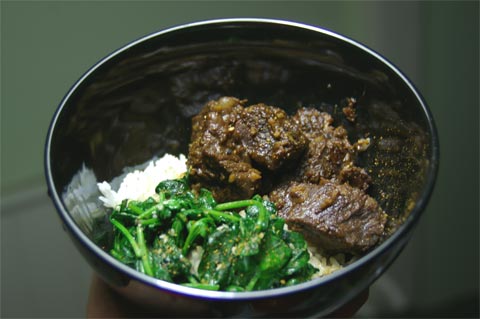 Serve it in relatively small portions on rice. Small portions? Yes, because everyone will want seconds! I’d recommend accompanying it with clean sweet preserved vegetables (light flavours), or some fresh, lightly cooked snowpeas or buk choy or wilted spinach.