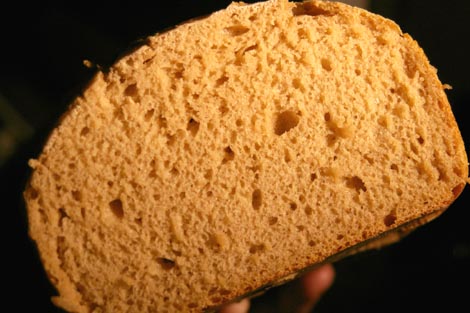 Bread. I like. Warm. Ovenly. Is it true that you get indigestion from eating still-warm bread? I know I do, but I suspect it’s more through overconsumption than mythical powers. Especially when it’s my slow-fermentation loaf. I’ve been using Dan Lepard’s (The Handmade Loaf) slow fermentation, minimal knead method for about two years now and have been a happy chappy for all that time. (I’ll write about the method another time, but if you don’t have the book it is a must-have for enthusiastic crustophiles.) Recently, however, I took the plunge after a 12-year hiatus and started nurturing my own natural leaven (sometimes known as a ‘starter’ or ‘sourdough leaven’). The results have been mindblowingly happy-making. I ate half a loaf in one sitting. Woops.

Although I don’t mind spending eight hours nurturing a slow fermentation bread (it needs brief kneads, then occasional folding in order to achieve good texture and crumb), it does mean that scheduling baking can be difficult. Using a sourdough leaven is even slower. But does it have to be?

I have a fairly fancy (but now five years old) bread machine that allows a reasonable number of adjustments to kneading and proofing (rising) cycles. What, wondered Duncan, would happen if he made a sourdough and maxed out the proofing cycles? Something beautiful.

It was by no means a foregone conclusion that it would be successful, yet at the end of the baking program I had a well risen, slightly pale, fragrant beauty. The top crust had broken open in an unusual way and certainly wouldn’t have won the Miss Loaf 2008 pageant, but the crumb was great. Bread machines aren’t great at giving a good top crust, as the heat just isn’t intense enough, so whilst some crunch and browning flavour is absent, it’s a minor loss for the convenience of creating a relatively low maintenance sourdough.

The loaf took six hours with little attention, which works reasonably for many people coming home from work, say. The bread can be ready by bedtime.

As making a leaven is a separate project, I’m going to assume that you have one already or know how to. If you don’t, I can write about it another time or you can read one of the many good bread books which have appeared in the last two years. 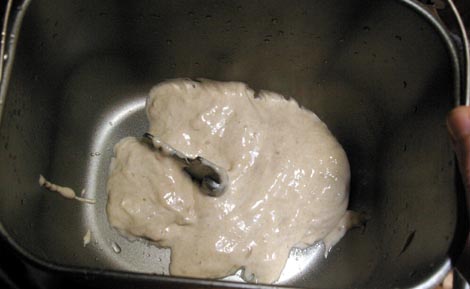 I placed the quantity of leaven in the machine’s bowl, poured on the water and then added half of the flour. Using the bread machine’s basic cycle, I let it mix these together to form a sloppy dough — just long enough to incorporate the ingredients. I then poured on the remaining flour and the salt and just let it sit for an hour. 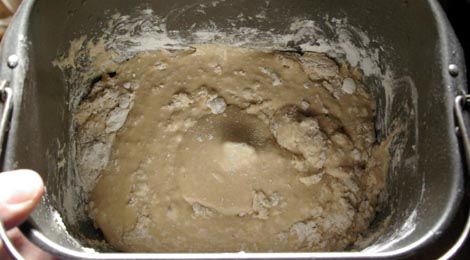 The bread machine has an initial warming cycle which I let run for five minutes, then kneading commenced. There were three proofing cycles with a very brief knead at the end of each of the first two. For a sourdough, the final proofing cycle may well be too short (my machine can do a maximum cycle of 99 minutes) — this was ok for a sourdough made with 100% wheat bread flour, but not enough for a wheat/rye loaf. To solve this I terminated the program after the last proofing and started a new program with 45 mins proofing (total 99+45) and then 40 minutes baking. 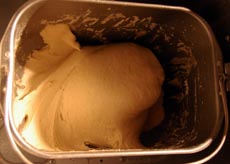 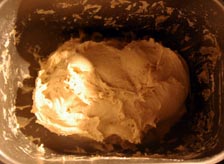 Bread machines vary a lot, so adjustments to times and volumes might be necessary. The dough tends to be much stickier and less inclined to form a nice ball than a normal dough, so at the start of the final proofing (ie, at the beginning of the 99 mins) I reached into the bowl and gently pulled the dough into the centre in order to distribute the dough fairly evenly. You do have to accept that it won’t end up being perfectly regular. You may also find that the surface of the dough dries a little, as bread machines aren’t airtight. 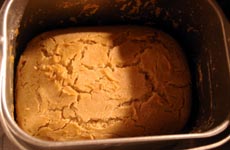 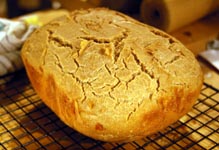 The unusual cracking of the top crust is due to the drying of the surface and the lack of strong top heat at the beginning of the baking cycle.

Putting it all in writing seems to make it sound like more a hassle than it was. In essence there are four steps:

1. Partial kneading and resting of ingredients for an hour.
2. Brief monitoring of ingredient incorporation when main kneading begins.
3. Neatening of dough before final proofing.
(4.) Manual extension of proofing if necessary

I hope this serves as inspiration for the home bakers out there. The bread shown above was a rye/wheat mix with some malt added for colour and flavour (and the chance to lick a malty spoon).