Canberra. The national capital. Reputedly one of the most boring conurbations on the planet.

I was last in Canberra in 1992 for the briefest of visits. I had, however, spent four years living there in the late 80s and can’t forget the shockingly quiet and ordered life of that sprawling place. For a city overrun with public servants, diplomats and the entourages of politicians, it offered relatively little in the way of nightlife or culinary enjoyment.

I lived on campus at ANU, which was lucky because navigating Canberra without a car wasn’t much fun. Despite a far-reaching bus network, getting places could be hell because of the infrequency and circuitousness of buses and routes and the dearth of options in the evening or on Sundays. Taxis were few and unreliable. At least life as a cyclist could be good.

Not a hell of a lot has changed.

The bus-stops have been upgraded to poles with a sign rather than stumpy wooden stakes planted in the ground. The same buses (now almost 20 years old) ply the streets. The taxis are still dodgy. The bike paths are more numerous. 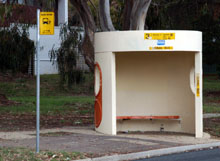 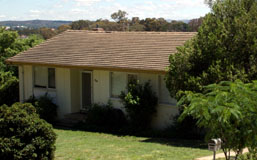 The sprawl of spaghetti-street suburbs eats ever further into the surrounding bush and pastoral land, perhaps making Canberra one of the lowest-density urban sprawls imaginable. It’s a very pretty sprawl, very Australian in its greenery(/brownery), and with quaintly dated suburban architecture. Given that most residential structures in Canberra date from the 40s and 50s at the earliest, it’s surprising how many two-storey brick dwellings there are, while the boxy metal or fibro houses in some suburbs seem out of place, like the poorer areas of country towns or the estates of fibro housing commission dwellings on generous plots that you once saw (or perhaps still can see) in much of New South Wales.

On weekdays, much of Canberra is ghostly quiet. Everyone is at work and the suburbs become tracts of hushed streets and echoing houses, the silence and still broken only by the various beasties which exist in hordes: 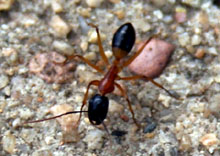 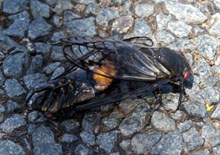 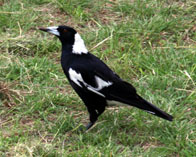 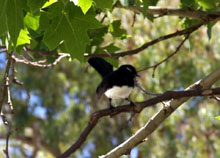 At 6pm the humans return. The only daytime human life is found at the local shops — mostly small strips of a handful of shops — or in the large ‘town centres’ (Belconnen, Woden, Tuggeranong) and the city centre, Civic. Everything is planned. Corner shops or randomly placed eateries are non-existent because there was no opportunity for them to arise. You could walk Canberra for hours without coming across a source of refreshment.

The biggest change seemed to be in Civic. At the end of the 80s a modest shopping centre was built, adding a touch of modernity to the rather moribund city centre. Now expanded, the ‘Canberra Centre’ is a large, diverse complex of shops, adding vitality to the centre. Other parts of Civic have sprouted al fresco dining and a tangible café culture, something painfully absent two decades ago. Alongside all this you can still find daggy arcades and unrenovated small shops, adding to the strange Canberran ambience of simultaneous modernity, conservatism and anachronism.

Food remains a weak point. There are scarcely any restaurants to compare with the state capitals’ first-echelon establishments. Good supermarkets are thin on the ground. With the exception of one or two local shopping strips, there seem to be few remarkable cafés or purveyors of comestibles. And there seem to be no active foodbloggers there!

Here and there, sparsely scattered, are shops of note, but you have to know them and be willing to travel:

This is not an exhaustive list, but I fear it wouldn’t be much longer if I were aiming to be ambitious! (And I suppose I should mention that there is a branch of Essential Ingredient.)

While the general food scene might make one cry, there is one saving grace. Canberra’s Capital Region Farmers Market outdoes any in Melbourne in its scope, diversity and relaxed, genuine feel. That contrived ‘lifestyle event’ edge to most/all Melbourne farmers’ markets seemed almost completely absent and there was a refreshing multicultural element. A Ghanaian stall, a seller of Middle Eastern sweets, a mainland Chinese snack kiosk, and one or two other vendors added to the already stimulating mix in the two sheds and open area. And the brownie from Amore bakery! Oh mama! 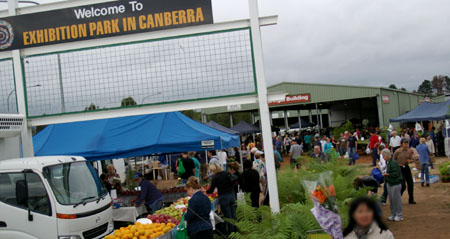 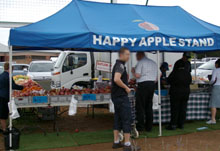 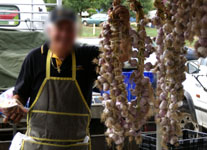 I would almost, kinda, maybe, in a dream (not reality!) move to Canberra for this market. But because the bus system sucks, I can’t face the thought of trekking out to the inconvenient market location. And anyway, Canberra is expensive, flyblown (no, really, their fly plague is worse than Melbourne’s this summer. I was almost drinking Aerogard to keep them off me.), hot, cold, and endowed with too many creepy crawlies.

The birds are pretty, but.

8 thoughts on “Canberra: not a foodie’s paradise, but a surprise or two nonetheless”