Many people have asked me why I’m not participating in the Melbourne Macaron competition, I’ve decided I have to write this article explaining my perspective. Despite my criticisms, please note that I do hope that event turns out to be fun and successful.

Was it poor execution or a cynical PR-thing? First, Twitterers noticed they were being followed by @eatmacarons, a new account that announced the impending revelation of the “top 20” Melbourne macaron establishments and a competition event in October. The account profile pointed to a website “coming soon”. No identification of who was behind the list or the event. Nix. Tantalising tweets went out, tweet-incentives too (free tickets). Still no uncloaking of the organisers.

To me, it smelled like yet another public relations game among the many now playing in the food-internet/blog-world. Managing to follow over 1000 people on Twitter in less than a month is seriously impressive. After some technical research, I discovered that this “Food Designer” was behind it.

On the Sunday before the public announcement of her list, I got a call. (I don’t think out-of-the-blue non-crisis business calls on a weekend are polite, but clearly, telling me I was on her Top 20 list was so urgent that calling was absolutely necessary.) At the same time an invitation letter and entry form for the October competition arrived by email.

The Top 20 list was interesting (and still is). As someone giggled to me, “are there that many good macaron makers in Melbourne?” How did the list come about? As far as I can divine, personal recommendations to the organisers. (And I know who nominated me – thank you.)

Less than 24 hours later another organiser called asking me to verify my participation in the competition (the closing date was still four days away).

The invitation letter described the event as a “student-run initiative”, but the signatory to the invitation was the “Food Designer” Linda Monique Kowalski. She didn’t identify her business or that she (presumably) isn’t a student in this initiative.

Eventually, the website revealed that “A team of 15 volunteers directed by creative consultant & fooddesigner, Linda Monique, aim to promote this petit four as the next cosmopolitan cupcake.” Oh yay. It was still oddly unclear why the students/volunteers were involved (revealed only after I enquired directly to be a Melbourne University student entrepreneurship initiative).

Pay-to-play, and don’t read the rules

The letter informed me that a participation fee for the competition was due by Friday. $220 thank you. This sort of thing might be common in PR/industry competitions, but no thanks.

Reading on, the short set of competition rules finished with clause 6:

“Additional rules to the competition my [sic] be implemented by the Melbourne Macaron team”.

I see. So one agrees to compete and they can do whatever they want with the competition? Amateur or dodgy?

I declined. So did Café Vue, it would seem. Both our names vanished from the “top 20” list tout de suite. We were promptly replaced with backups. I’ve just noticed that Baker D. Chirico is now also gone, replaced by Brunetti. And OMG ROFL the organisers even went so far as to purge their earlier tweets naming us on their list. 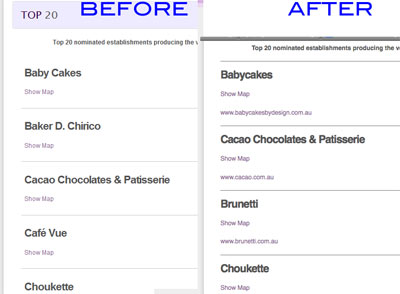 The Twitter feed for @eatmacaron seems to have suffered a deletion. Where’s no. 4? It used to be Café Vue.

There’s something inherently dishonest (or amateurish) in creating and publishing a Top 20 and then editing it post hoc to suit your needs. And it’s just a tad optimistic to assume every nominee would leap at the opportunity to compete (with or without a fee). There was no explicit linkage of Top 20 status and any requirement for participation in the competition (usually you’d name your flexible Top 20 after all the entry forms are in, if that’s how you want to play it).

I continue to hope that the lack of transparency and other issues are more due to inexperience than part of some ill-conceived marketing game, and that it can be a fun event for the participants in the end. I can see the attraction for others who might want a boost in business and I wish them success if they compete.

Finally, so that there aren’t any misconceptions, I don’t mind not being part of the event – while it was nice to briefly have been on the list, I chose not to be involved for the reasons above and events since then seem, for me, to have further justified that decision.