I asked the durian seller, quite persistently, how to tell the difference between the many varieties of the fruit he sold. He had four, each for a different price.

Mittens, my co-eater, had tasted every one of these stinky, prickly darlings over our nights in Kuala Lumpur and could discern differences in texture, sweetness and some of the “bitter” aspect described by many durian afficionados. Yet to the uninitiated, these were all just homogeneously beprickled stinkpots.

After interrogating the seller, I rushed back to my hotel to make notes for later, so I could communicate the imparted knowledge to my dear readers. Alas, somewhere between good intention and a bag of cheap and gorgeously delicious mangosteens, the manual annotation never happened, leaving me with just my memories. Those memories endured for a few weeks, but now, as I have sat down to impart the durian knowledge a few months later, I discover I have no notes and my memory has faded.

It seems almost cruel to tell you the differences between four varieties of durian when I can’t remember which was which, but I live in hope that some other durian-wise internaut might pass by and help out with the labelling.

Durians are weighty, prickly fruits, usually in excess of 1kg, with large segments of thick, creamy flesh surrounding a seed. The flesh ranges from pale off-white to yellow and even red. Durian lovers can identify “sweet” and “bitter” characteristics between varieties, and the texture can range from very creamy and soft to quite thick, and sometimes fibrous. Durians smell nasty to the uninitiated and are variously banned from hotels, some public places and public transportation (which of course means they are often identifiable on public transportation, rules being there to be broken).

Durian season in Malaysia is approximately June to September, but kampung (village) durian from local village growth, rather than organised plantations, and Sarawak/Sabah (Borneo) durians are around for considerably longer and can still be good quality (we were there in late October). Durian vendors will usually cut open the chosen durian and remove the segments, placing them in a container for you to smuggle back to your hotel. Hehehe. The SE-Asian press frequently writes about durian, and there are a few blogs too, though unfortunately they spend more time enjoying the latest durian than helpfully cataloguing the types (I display my analytical bias unashamedly). The widest range of photos is probably found at Stinky Spikes, or watch this guy’s great video of durians being cut open. 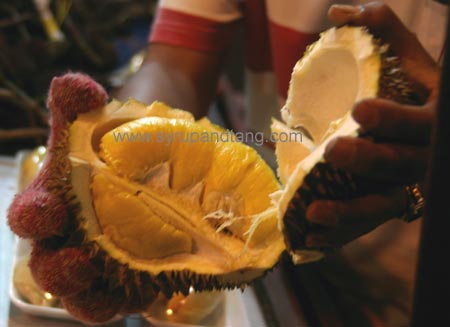 I believe the Malaysian varieties that were explained to me were labelled D2, D24, D101 and King Musang. (Malaysia has helpfully numbered many local varieties, though they are sometimes commonly referred to by special names instead.) You’ll also find other varieties such as D99 around Malaysia and the lucky-dip kampung ones. In Australia we only really see Mon Thong (D159) durian from Thailand, quietly defrosting at market stalls or in the occasional supermarket.

So here are the four characteristics I was shown and sadly can no longer associate with specific varieties:

Type1: the spikes align so that you get straight spines (valleys) running the length of the fruit in some places. (possibly D24)

Type2: the spikes are arranged in groups of four of similar size, surrounding a fifth little one. (possibly D101)

Type3: at the base of the fruit, the spines diminish to an almost bald spot, described by the seller as looking a bit like a star (the uneven flattening around the edges could create that impression). (perhaps King Musang?)

Type4: at the base of the fruit, the spines diminish to a raised almost bald spot which protrudes a little like a nipple.

We saw all of these examples firsthand, but I can’t guarantee that these characteristics are always present. 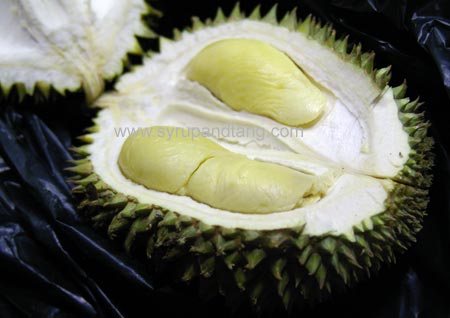 Although I would once have vomited at the prospect of eating durian, my “appreciation” of this fruit changed during our trip (hey, two weeks of durian-smuggling-into-hotels by Mittens didn’t leave much scope for nausea). I still can’t breathe through my nose while putting the flesh in my mouth, but I can sort of enjoy the thick creamy mouthfeel and sweetness. It’s a bit like an incredibly unctuous egg custard, thickened too far, and with a dash of rotting onion thrown in for fun. I don’t appreciate the residual rotten-onion-breath.

So while Mittens slurped up the contents of a one-kilo durian every night for thirteen nights, I contented myself with juggling fresh, spongy-shelled mangosteens, and discovering why hotels don’t appreciate the red juice from the shell (it *stains*). Mangosteen are just beautiful, but don’t bother with derivatives like syrups or sorbets, as the delicate flavour is almost impossible to capture properly. 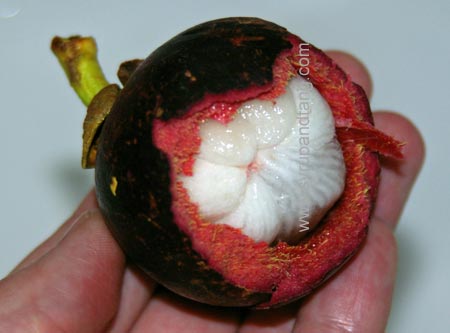 As a side-note, it should be mentioned that while the pong of durian is very very hard to conceal, the pong of jackfruit is more pervasive in a hotel fridge. Jackfruit seems innocuous, and tastes quite pleasant, but it smells of something approaching warm, rancid cheddar, even at 4C, and its spirit lingers even after consumption.

Anyway, back to durian for one last time. Chinese Malaysians will tell you that durian is “heaty” and one shouldn’t eat too much. “I’ve heard of someone who died by eating too much” is a not uncommon comment. Well, to them I say that Mittens must be rather chilly, cos after thirteen durians he was crying out for the next one and was in excellent health.

Apologies for this rather unhelpful durian catalogue! Fingers crossed that it is enhanced over time. Selamat makan!