Do you think of baklava as a sweet that is tricky to make or time-consuming? I know many people have asked me questions along those lines in recent days. It’s easy. Really. And here’s a particularly refined version I made recently.

Nut pastries involving layers of filo pastry and ground nut are eaten all the way from the Balkans through the Middle East, the Maghreb, Afghanistan, Saudi Arabia and beyond, typically known as a type of baklava/baklawa. Rather than making one of the many recipes I have from different places, I decided to combine the essence of a number of traditions to produce something with a lovely complexity of flavour, using spices and scents typical of many of the cuisines of that very broad region.

For the filling, I’ve used walnuts and pistachios ground with sugar (about half the weight of the nuts) and scented with cardamom and rosewater. The base of the tray was covered with about eight layers of thin filo/fila/phyllo pastry, each buttered lightly. It’s helpful to let these bottom layers rise up the sides of the tray too, as this contains the filling better during cutting and later removal of the baklava from the tray. I then added half the nut mixture and flattened it out. A further four layers of buttered filo create a nice textural difference. Then the remainder of the nut mixture. I topped this with eight layers of buttered filo. 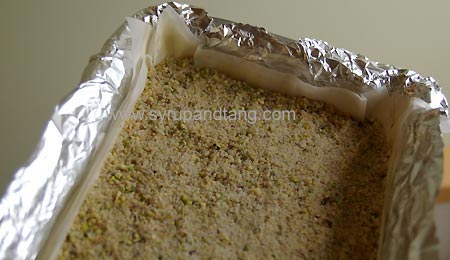 Note that, as most trays nowadays have a delicate non-stick coating, I lined the tray with four pieces of baking paper to reduce the risk of damage during cutting and then a layer of buttered foil.

You should cut diamond shapes into the baklava before baking. Use a very sharp knife and press downwards rather than pulling the knife through the baklava. My pieces were a little larger than intended, as I spaced the long cuts too far apart.

Bake the baklava for 30-45 mins at about 160C (for conventional oven), then raise the temperature to about 200C for a further 10-15 mins when you see the top pastry layers are beginning to puff up a bit. You don’t want the pastry to get brown (no darker than a roasted almond (yes, a blanched one!)), but you do want it to cook through. If the top layers are going brown, cover with foil.

Once you’ve removed the tray from the oven, pour the cold syrup over the baklava. It will sizzle deliciously. Let it cool for a few minutes, then use your knife to re-cut the diamond shapes (it makes separation of the pieces later much easier). 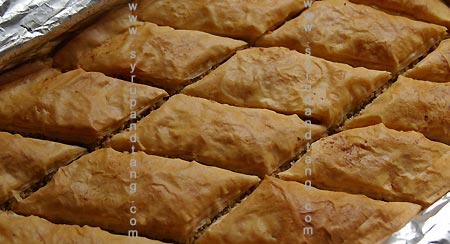 You can serve the baklava as soon as it is completely cool, but you’ll find the texture is better about a day later, as the syrup will have been properly absorbed by the nut mixture by then.

There are many factors here that will influence the final flavour — different strengths of rose and orange blossom waters, freshness of spices, etc. It’s up to you to judge the flavour to suit you. I’d recommend being a little cautious at first.

By the way, although I usually make all my own pastry, filo is something I didn’t have time to try this time, sorry!

Now, baklava/baklawa is sweet. If you already know that the typical product in your Greek or Middle Eastern pastry shop isn’t to your liking, this version isn’t likely to be much more palatable for you, though my version is more fragrant and less sweet and syrupy than some.

As you can see, there are no real tricky bits to making baklava, and the preparation is pretty quick. The result is something nutty, perfumed and delicious that goes perfectly with strong coffee.