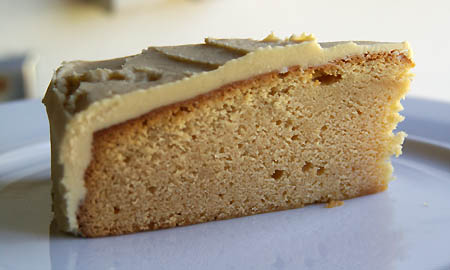 This month’s Daring Bakers challenge comes to you in stereo on Syrup&Tang. My Parisian correspondent, Harry, has taken up the Daring Bakers cause and baked his little heart out. Alas, he lacks a blog, so he’s posting here alongside me. What did we make? Caramel Cake with Caramelised Butter Icing.

The name of the cake has been slightly modified to reflect Australian norms (in solidarity with the philosophy of Cathy at Everything Goes With Cream). The cake itself? Well let’s just say that I had contemplated starting this post with “And how f**king sweet do you want it, sir?”. The body of the cake is pleasant, dense but a lovely texture in the mouth. The ‘frosting’ is very, very sweet and if I tell you that I halved the quantity and still had more than enough to create a modest, appropriately iced cake, then you can perhaps take pity on those who made the full amount and now lie in bed in a sugar-induced coma. (And I haven’t even dared mention the caramel sauce and caramels which were suggested accompaniments to the cake!)

Anyway, here you go. As a caramel cake it’s mild, pleasant, inoffensive. There are definitely cakes out there that better express caramel notes, but I might still make this one again. Different icing though. 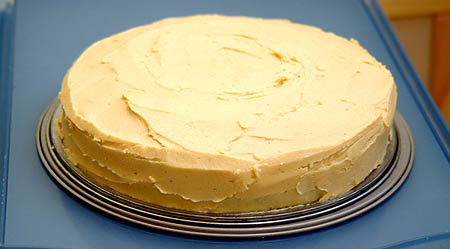 And now for the account from Harry de Paris: (drumroll!)

or
A Different Way to Fry an Egg

Like a good English novel, I’ve given my Daring Bakers Challenge post an alternative title. Unfortunately I don’t have the flair of, say, Jane Austen, but the moral of the story, I hope, will rival a good George Eliot.

When I first read through the recipe for the caramel cake, it all seemed to me like a bit of a sugarfest. Two cups of sugar here, another cup there, add a stick of butter or two and some cream. Just thinking about that amount glucose was making me hyperactive!

Not being a particularly sweet tooth, the challenge for me was how to make something that wouldn’t make my head spin. I determined to add a slightly more savoury element to the recipe, to counter the sweetness of the sugar syrup. After much umming and ahring, I finally decided to incorporate a small quantity of coffee, into the batter in which I soaked a few cardamom seeds. It then occurred to me that I could take the idea further and try making a kind of marble cake, with a syrupy batter on the one hand, and a more savoury coffee one on the other.

Dutifully I turned on my oven to preheat it to the right temperature. Baking in my gas oven is always a bit of a hit-and-miss affair. The three markings which appear on the temperature dial are 150, 250 and 270°C, with the latter two spaced further apart than the first. Precision is not one of its stronger points.

Now to the batter. One lesson I learned the hard way was that, if you’re as bad at cracking eggs as I am, crack them into a cup before adding them to the mixture, because trying to get egg shells out of the batter is a right pain! My second and third eggs went into a cup while I…oh I forgot: the oven!

After faffing about with my batters and eggs and things, my trusty oven temperature gage told me I had well and truly overheated it to levels usually reached in a potter’s kiln. I opened the door for a couple of minutes to cool it down while I went back to my batter. Enter the eggs. I picked up the cup to mix the eggs into batter, and with one swift and somewhat inelegant move, the cup slipped from my grasp, the contents fell squarely upon the open, but still scorchingly hot oven door and fried instantly. It all happened in slow motion, like a dream sequence in a film. The smell of rapidly cooking egg brought me back to reality, however, and I hastened to clean it up – easier said than done on a burning hot surface.

After that minor disaster, and a few eggs later, the cake and icing more or less made itself. I’d left it the oven a touch too long so it came out a little singed. The marbling effect didn’t work visually, as the coffee wasn’t dark enough, but the taste of the coffee touched the spot. My guests that evening were happy as far as I could tell, and they asked for seconds, which is always a good sign. And the story of the eggs certainly made for an entertaining anecdote.

So… the moral of the story clearly is that one must always keep one’s cups of eggs well away from hot ovens when the door is open. But everybody knows that!

Thanks for reading! HARRY. 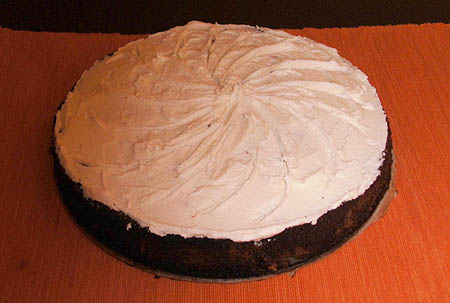 Recipe: Shuna Fish Lydon from Eggbeater published on Bay Area Bites.
Challenge: hosted by Dolores of Chronicles in Culinary Curiosity. Co-hosts: Alex of Blondie and Brownie, Jenny of Foray into Food and Natalie of Gluten-a-Go-Go.