On the road and gathering experiences. I’m writing travel notes here. Something different to the normal fare, but perhaps of help to others, or mildly entertaining for regular readers. This post takes you to Singapore Airport, then Paris and Madrid.

Some heavy duty travel tips are listed separately at the end, more to help people searching for specific travel info.

Singapore Changi Airport: The new Terminal 3 is lovely, open, bright (though it’s website is just a pain in the flash animation). None of the claustrophobic atmosphere of the other terminals. Lots of free internet access too. The new transit (airside) hotel is simple but comfortable, though I’m amused by the curtain along one wall, simulating the place of a window. There’s just concrete wall behind the curtain.

A good mix of eateries catch my eye, including a dumpling and steamed bun place on the main concourse. For this non-seafood eater, dumplings present many hazards. On the menu are ‘crystal chive dumplings’. A faint yum-cha memory gives me hope these would be friendly dumplings. Bzzzz. A mouthful of prawn meat has me spitting. Luckily I’ve bought a cha siu bao (steamed pork bun) as back up. Okay. Good hoisin sauce flavour. Wash it all down with a kopi – brewed coffee with condensed milk. Sweet and strong.

Paris: An early morning arrival at Paris Charles de Gaulle Terminal 1 (fondly known by some as the ‘concrete doughnut’) usually means horrendous queues of queue-jumpers at passport control. This time, not only am I off the plane promptly, but passport control is sporting neat queue ropes and only two people are ahead of me. Hooray! Just 20 minutes later I have my suitcase and am on the automatic train to the urban railway station (RER-B T1). This little shuttle train, the CDG-VAL, is a godsend after many years of confusion at the shuttle bus-stops. (Existential question of that era: how many Americans does it take to find the right shuttle bus?)

Escaping Charles de Gaulle so quickly puts me on an RER train before 8.00am – no fighting with baggage and grumpy Parisian commuters. I alight at Gare du Nord (the main northern interchange) and the second smell greeting me is sweet, fresh puff pastry and caramelised sugar (the first smell is stale urine… it’s Paris).

These seductive aromas emanate from the bakery of a normal supermarket (Monoprix) in the station. I buy a tresse aux noix (walnut plait). Fantastic. Light pastry, a pale nut caramel inside, and caramelised walnuts on top. EUR 1.30 (less than A$ 2.50). This is why I complain so about Australian bakeries. 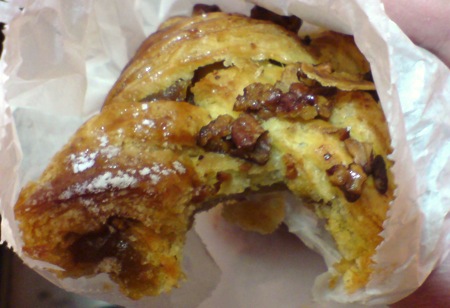 I meet up with Harry, friend and occasional commenter on Syrup & Tang, and later that day we head for Madrid. Having to negotiate the same airport twice in one day is not fun, and though Terminal 1 isn’t much fun, it’s still eye-catching, whereas Terminal 2 is just a horror of people, dirt and stressed people. And bad tartes aux framboises. Does the pastry *have* to be this thick?

Madrid: It’s a holiday long weekend, so almost every hotel listed in the guidebooks of the world is booked out. I had managed to secure a room in a mid-level hotel on the Paseo del Prado, opposite the Retiros gardens and just down the road from Madrid’s most famous museums. We arrive and leave outside of their opening hours, but I can just feel the culture seeping down the street. Uhuh.

The hotel room is small. And hot. The aircon hums, but emits no chill. ‘It’s a long weekend so there’s no way we can get a technician,’ says the receptionist. ‘The whole system is broken.’ But you still charge us EUR 78 for the privilege. 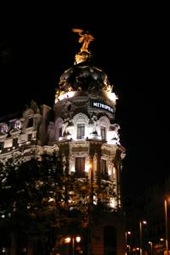 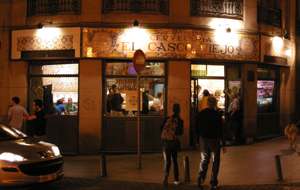 We walk northwards past grand buildings and hordes of Spaniards. Our target is the Chueca area, one of Madrid’s most vibrant quarters (and previously more than a tad seedy). We wander aimlessly until hunger is overtaking the sightseeing drive. Shortly before we become irrational from hunger (read this sometime, it’s interesting) we finally see a small restaurant which seems neither too daunting nor too full nor too empty nor too expensive. The waiter is brusque. It’s Spain. The clientele is a mix of tourists and regulars. The lighting is bright. The staff exude a sense of tension and efficiency. Harry rises into a calamari nirvana, while I slurp at a tasty fabada asturiana – a broad bean stew with a few pieces of chorizo and morcilla (blood sausage). Thoroughly delicious. A good start to the Spanish holiday.

A rotten sleep (no aircon, remember) later, we’re ready for breakfast. Step 1: find somewhere not too daunting, not too full, not too empty, not too expensive. We just aren’t ready for small bars overflowing with morning crusties. Nor are we brave enough for the bocadillerias overflowing with prettier people and tourists. Opposite the Atocha train station we find an enormous, bright, uncrowded yet clearly popular bocadilleria. We plonk down, famished and after only four attempts have managed to attract a waiter’s attention. I simply must do the chocolate con churros thing, despite my first experience, now six years hence, having been a greasy tummy-torture. Harry’s primary nourishment is coffee (or beer), so he’s happy with a cafe americano. 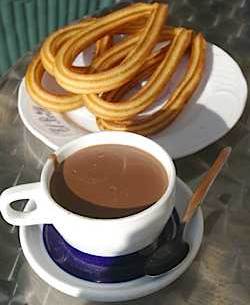 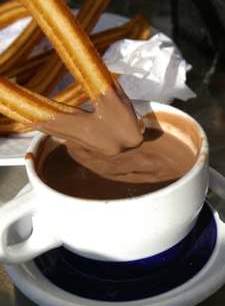 My churros are greasy but fresh. The chocolate is thick and pretty good, though the Iberian obsession with UHT milk is unmissable.

We go to board our train at Atocha. Our baggage is x-rayed. One of those meaningless security measures, but natural after the bombings of 2004. 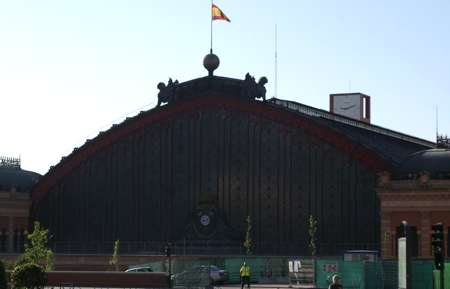 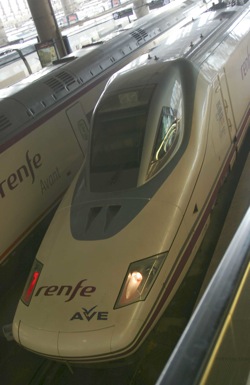 We’re on our way to Córdoba, Andalucía.

Singapore: Changi airport has many distractions to keep you busy during a long layover, but the absolute winner, in my opinion, is the transit hotel in each terminal. They don’t cost a lot – less than SGD 60 (A$ 50) for the first six hours, at the time of writing. The rooms are a tad sterile but if, like me, your legs no longer deal with the economy class squeeze very well, don’t miss the opportunity to lie down, or shower, or watch awful Singaporean television. Advanced booking is often necessary.

Paris: The CDGVAL means that getting off the RER at the wrong terminal at Paris Charles de Gaulle (Roissy) airport no longer matters as much. You can just hop on the CDGVAL (it’s free). Heading into or out of Paris, avoid Chatelets-Les Halles station – it’s a nightmare on earth. There are probably skeletons in shadowy corners of this labyrinthine travesty.

Madrid: When taking the metro into Madrid from Madrid Barajas airport, it can be useful to look at the map and choose interchange stations which are less popular. The crowds at Nuevos Ministerios interchange station can be large, as can the distances between lines.

Madrid-Atocha (RENFE): Allow time for the security procedures (though they’re nothing like an airport). Train departure ‘gates’ are on the upper level.