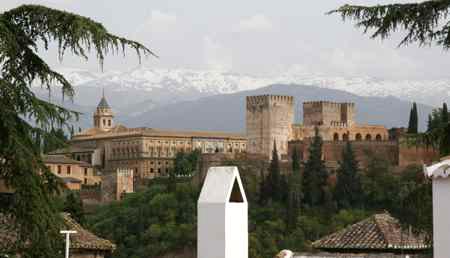 Spain loves its fast trains. We had wizzed from Madrid to Córdoba in 1h45m in an AVE fast train. A distance of approximately 300km. After staying in Córdoba, we travel on to Granada. The carriages are the same oddly stubby ones as for the AVE (perhaps half the length of a carriage you or I might know), just an earlier generation, but this train is called an Altaria. It ain’t so fast. Same but different. It takes almost 2h15m to travel about 130km.

Granada’s RENFE station is just under 2km to the northwest of the centre. We walk up to Avenida de la Constitución to catch a bus. The bus stops are poorly marked – we can see a pile of them, but we can’t easily see any numbers. The buses are full and we’re not in the mood for squeezing in with the lunch rush hour. We walk. The weather’s beautiful.

The streets are buzzing with people. Where Córdoba felt small, Granada feels distinctly city-like. We turn onto the Calle Gran Vía de Colón. Elegant apartment buildings line the street. At ground level are all kinds of shops, from clothing to cafés and numerous banks. As the street comes to its end just southwest of the Plaza Nueva, the streets are buzzing with locals and tourists either loitering in front of the cathedral, wondering why it’s closed (this is lunchtime in Spain, stupid!), or popping in and out of the sidestreets which are lined with bars and restaurants.

Our hostal is two blocks further east from this hive of activity. A pedestrian street with strongly tourist flavour (how many languages are those menus in?) leads us to the surprisingly friendly, relaxed Hostal Costa Azul. The ladies who seem to run the place are genuinely warm and helpful. Add to that a surprisingly spacious room, the best shower I’ve had in a two-star place anywhere, and free WiFi. in the lobby. Such a nice place that we were even able to overlook the large numbers of American guests abusing the Spanish language in unimaginable ways.

Granada is home to the Alhambra, a fortress complex of palaces, gardens and fortifications. It stands high on a verdant hill overlooking the surrounding flatlands. In the distance you see the snow-capped mountains of the Sierra Nevada. 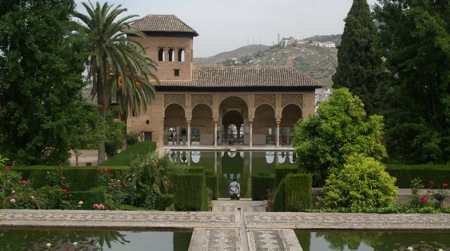 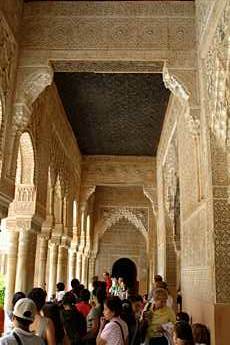 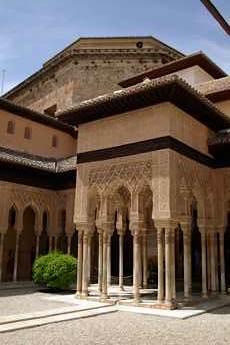 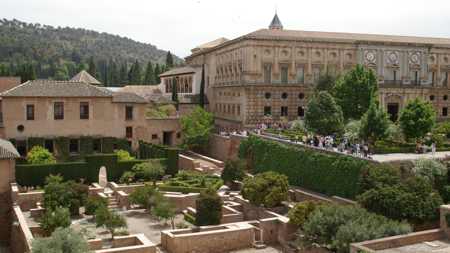 Visiting the Alhambra requires some planning. The number of tickets for the morning, afternoon and (more limited) evening timeslots is restricted and booking tickets online in advance is wise. Failing this, some hotels can find tickets, or otherwise you can try queuing for hours at the site’s ticket office. The Alhambra is a comfortable bus ride or a steep walk up from the Plaza Nueva.

The rest of Granada is not an ugly duckling dominated by the Alhambra. The cathedral is impressive, the centre is stylish, and other points of interest include the Albaicín quarter and the gypsy caves of Sacromonte. Flamenco is big. The tourism industry is enormous. Read between the lines. 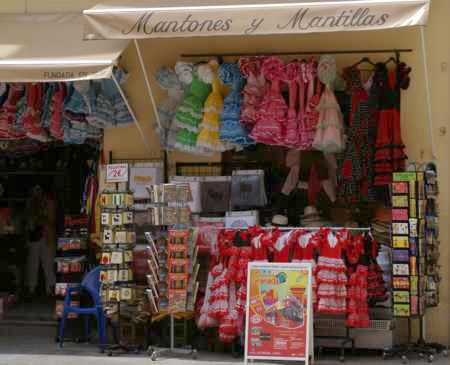 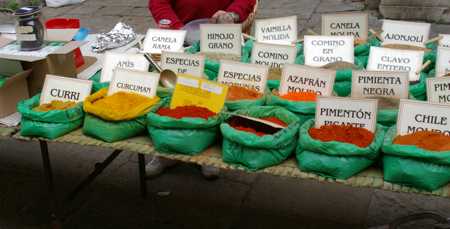 Granada is rich with restaurants, tapas bars and bocadillerías (sandwich and lunch places). As a real city, normal life co-exists pretty well with the hordes of tourists. The fancier bocadillerías aren’t overflowing with tourists and the fantastic heladerías (ice-cream shops) aren’t gouging ice-cream lovers with ludicrous prices. Small panaderías sell rather plain bread to queues of old women, and business people hurry to and from a (hopefully) delicious lunch. 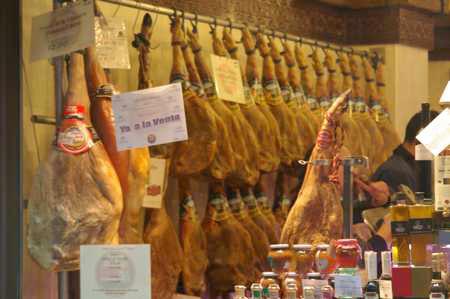 Harry and I had one delicious meal. We aren’t thrilled by our guidebook’s recommendations and many promising places are closed on a Monday. We happen upon a rather touristy place with a vaguely enticing menu. Surprisingly, the waiter is markedly jollier than any previous experience in Andalucía and this, along with a rich, delicious plate of rabo de toro (oxtail stew) and an enormous skewer of grilled pork, makes for one of the most relaxed, enjoyable evening meals. 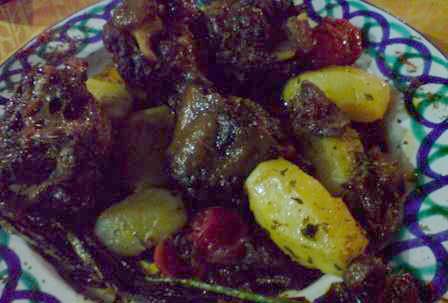 One afternoon we find an almost-empty pastelería. The lunching public has moved on. It’s about 2.30pm. The weather is warm and we need a drink and something sweet. I order a horchata (typically in Spain, a drink made of tiger nuts – chufas, though in Latin America usually made with almonds). It’s sweet and a bit powdery on the tongue. Our cakes were more interesting: a pionono de Santa Fe, made with a rolled sponge flavoured with cinnamon, filled with cream and topped with an eggy custard, lightly caramelised on top. Harry has a creamy orange and chocolate cake. It is, in fact, less creamy than many of the popular cakes in Spain. 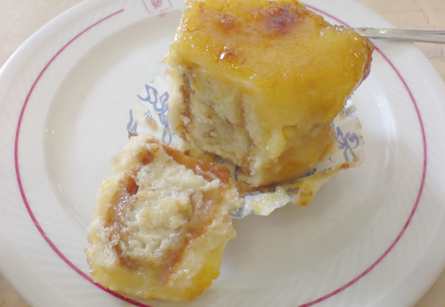 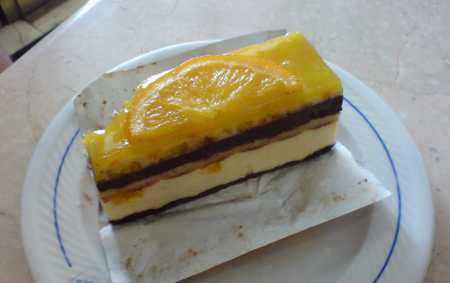 Harry flies back to Paris the next day while I stay on. A morning highlight is an ice-cream from a place called (I think) Heladería Los Ángeles on the Acera del Darro. A mandarin ice-cream to make you cry. A quick visit to the central Mercado San Agustín reveals row upon row of seafood, meat and charcuterie, some cheese, but barely any fruit or vegetables. A number of stalls are shut, so I’ve no idea if they would offer non-animal sustenance. 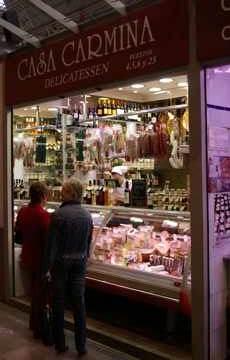 I pack my things and catch a very slow bus to the estación de autobuses, located some distance northwest of the centre. Luckily I’ve bought a mohina to keep me nourished for the journey to Sevilla. 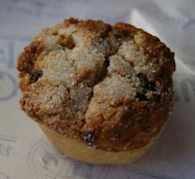 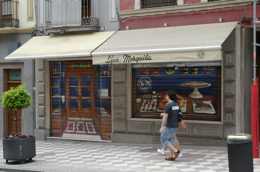 Granada: As in most of Spain, maps aren’t always oriented to North (I’ve only seen this in Japan before). this means that comparing maps of teeny, curving streets and landmarks and bus-stops and train stations can be more than a little challenging. At the Alhambra this was particularly bad, with ‘orientation’ maps of the complex being rotated seemingly at will. I think it’s done to keep the tourists on their toes.

The train station is not too far from the centre. The bus station is a long way, and you should allow considerable time for a local bus to get there through at times heavy traffic.