I’ve been thinking a lot about the good old vanilla slice recently. It’s one of those standard, humble Australian bakery items that qualifies as “good old” for its longevity and as “humble” because of its modest level of finesse. But there are mysteries in all this (and questions for readers at the end).

I grew up eating vanilla slices as my preferred after-school snack, albeit constrained somewhat by the disappointing options opposite my high school. I could choose between the milkbar’s revolting, rubbery Four’n’Twenty vanilla slices (truly deserving of the colloquial name “snot block”), or the hot bread shop’s Greekified version, filled with a semi-translucent lightly lemony paste. Whenever possible, I’d find my way to the Ferguson Plarre bakery, as their vanilla slices were the childhood paragon of gooeyness.

What has brought me to this little discourse was a rare daytrip to the countryside: Woodend, a small town an hour’s drive from Melbourne, has somehow become famous for its vanilla slices. Two bakeries vie for attention. The smaller of the two, Woodend Bakery Café, supplied a not-quite-fresh slice (the pastry was too close to cardboard, despite its very promising appearance) with a creamy sweet custard and clear vanilla notes. A bit tall (perhaps aspiring to life as a millefeuille), it was a greater-than-usual challenge to eat this vanilla slice gracefully (perhaps a mutually incompatible concept anyway). 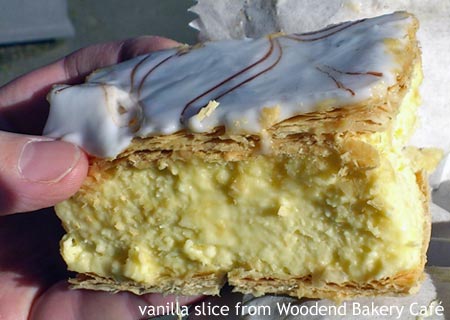 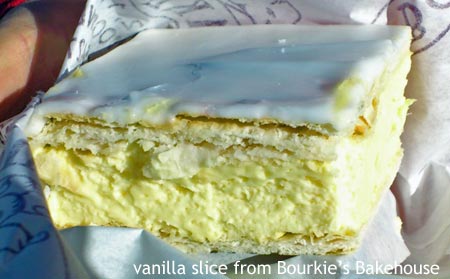 The second bakery, Bourkies Bakehouse, offers tray upon tray of slices, some with icing flavoured with passionfruit or raspberry. These were fresh (the turnover is enormous), with a custard of similar characteristics to their competitor and stodgy pastry, but of slightly more jaw-friendly dimensions.

While I preferred the texture and dimensions of the latter vanilla slice, both co-eater Mittens and I found the custard of the former slightly tastier. It was a very close call, though, and likely to change depending on freshness and minor variations in formulation. The review on the apparently now dormant Vanilla Slice Blog was scathing of the Bourkie’s slice and praising of the Woodend Bakery Café, but on our visit the differences simply weren’t that marked.

Back home in Melbourne, we tried my childhood favourite from a Ferguson Plarre outlet. This a no-nonsense affair: (1) thick, stiff but airy custard, (2) moderately thick, unimpressive pale pastry, (3) moderately thick, sticky icing. Texturally, I think the custard is great (for a vanilla slice) – my preference is definitely for custards that are less creamy than those in Woodend. The flavour, however, was that of cream and just the faintest hint of vanilla. I like eating them, but on closer inspection, there’s not a lot that’s truly impressive. Somehow, it just all comes together to be something innocuously pleasant. Maybe life just has to be that way sometimes! 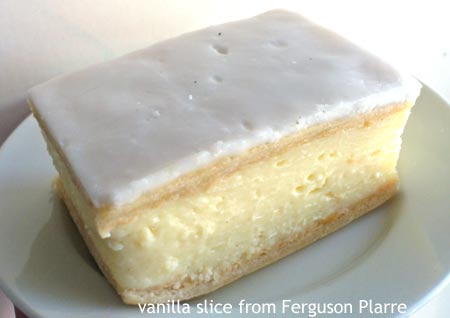 This article was originally going to include some baking in my kitchen, but I got sidetracked by some interesting observations, started by the fact that the Wikipedia entry for Millefeuilles dumps a whole pile of things together rather clumsily and imprecisely. (For a beautiful homemade millefeuille, see Sarah’s post.)

So where are the vanilla slices at home?

Although most of the people I know take the vanilla slice for granted as an Australian great, most are unaware that it not only has other names around Australia, but actually occurs in some form in other countries. I’m not talking about the French millefeuille, the distinctly classier relative, nor the Australian “French vanilla slice” which is more of a nod to the millefeuille, sometimes a mix of layers of custard and whipped cream, perhaps with coffee icing. I read once that New Zealanders and USAmericans call vanilla slices “napoleons”, but internet searches favour either clumsy millefeuilles or a layered slice of cake, custard and puff pastry under that name. Sometimes there’s even jam involved! It seems that “custard slice” or “custard square” might be a much closer relative of our target.

The state of Victoria seems to be disproportionately represented in online searches for vanilla slices. Even taking into account other names (it seems (some) Queenslanders prefer “custard square”), Victoria seems to be in the lead. There’s some bias because of the annual competition in the Victorian town of Ouyen.

Of further interest, there are remarkably few recipes for vanilla slices in common older Australian cookbooks, which makes me wonder if the popularity is less national than regional. Cooking queen Margaret Fulton, for instance, has no recipe in her main book or encyclopedia. Some Australian Women’s Weekly books do feature a recipe. The recent NSW Country Women’s Association Cookbook doesn’t. It’s not unusual for there to be no common recipes for baked goods that were only produced commercially, but it does make it harder to trace the history of the thing!

The majority of (more recent) recipes combine custard powder with milk or cream and egg. Most overseas recipes seem to omit cream. (You also have to ignore the “blinged up” recipes that have aspirations to be a millefeuille, so leave the recipes of Bill Granger and Maggie Beer and countless others out of the equation.)

And what should a vanilla slice be?

For me, the prototype of a vanilla slice is a square about 7cm (?2.5″) wide and about 4cm (?1.5″) high, with soft (not runny) white icing. The stiff custard is not a rich crème pâtissière and has a slightly aerated character (see pics). It is not lightened with whipped cream. The pastry is never particularly crisp (alas).

For my elderly neighbours, the size they remember from their childhood (the 1950s) is as above, as is the icing, but they remember the custard as being very pale and not as rich (perhaps a lean milk custard set with flour or gelatine?)

And my mother remembers a firm, pale yellow custard in Sydney’s vanilla slices. Her opinion of vanilla slices in Brisbane in the late 1960s is not flattering: “… the custard was nasty in that it was thick and solid but didn’t taste right for a custard and seemed to be mostly cornflour. In retrospect, maybe they used a lot of water rather than all milk to make the filling.”

Neither my neighbours or my mother can find a recipe from the time, so vanilla slices might well have been the preserve of the commercial baker. (I can find an English recipe for “vanilla slices” from the 1950s, which features white icing on top, and consisting of three rectangular layers of puff pastry, sandwiching two modest layers of both jam and either whipped cream or “confectioner’s custard”.)

I think the culinary world needs clarity, so tell me, dear readers (especially Gen X and older), did you grow up with the Victorian-style vanilla slice in your neck of the woods. Or was there something with a heavier custard? What was it called? And how long ago? Or was there nothing? And what about overseasy people?

My apologies in advance for any rumbling stomachs these questions may cause.