[My Parisian correspondent, Harry de Paris, has been wanting to write about these lovely custards for Syrup & Tang, so here you are… my first guest writer. Duncan.]

Inspired by the film Julie and Julia, I recently decided I would embark on a similar undertaking to cook all the recipes in a single cookbook. Armed with my beloved copy of Family Circle Dinner Parties (circa 1990), I determined every weekend to cook each of the recipes the book contains which, as it happens, are neatly organised into three and four-course meals.

The first meal consisted of an entrée of tomato garlic mussels, followed by veal with wine and mustard sauce for the main meal, and finally, crème brûlée as dessert. I must admit I was somewhat surprised to find a recipe for crème brûlée in an Australian cookbook from twenty years ago. I’d certainly never made it before, and had only tried it a few times in restaurants in the ten years I’ve been living here in Paris. They are delicious, really, but I’m just not that mad on desserts.

The first two courses of the meal went fine, both in the preparation and the eating. But when it came to the dessert recipe, I’m afraid I have to use the F-words: Fundamentally Flawed. I followed the instructions and doses to the letter, but the end product was a grainy, sometimes lumpy, tasteless custard with caramel on top.

If you haven’t enjoyed the pleasure of eating a crème brûlée, you should know that it is in fact supposed to be a smooth and light vanilla custard (thick, not runny, and certainly not lumpy or grainy). It is served chilled, but with a thin layer of burnt sugar on top.

Despite the initial hurdle, my resolve to pursue my endeavour was strong and I was determined to cook the following week’s dinner party meal. After all, I was on a mission. But sadly, my determination was no match for my desire to get those doggedly difficult crème brûlées right. Family Circle would have to wait!

Disappointed with the recipe I had followed, I delved into my cookbooks and browsed through a forest of websites and online cooking forums, only to discover that there are as many recipes for crème brûlée as there are budding chefs. In the multitude of recipes I found, the proportions of egg yolk to cream and the amount of sugar used varied as much as the cooking temperatures.

My research also revealed that crème brûlée is a dessert whose origins the French, English and Spanish all lay claim to. The Spanish (well, Catalonian) variety is known as crema catalana and, among other distinguishing features, it contains cornflour (unlike the French version). Burnt cream, on the other hand, originates from Cambridge, and is made mainly on the stovetop and can also include cornflour to thicken it. Finally, the French crème brûlée can be traced back as far as 1691 when the then royal chef, François Massiolet, wrote a recipe for it in his book of recipes, Nouveau cuisinier royal et bourgeois. In more recent times, the crème brûlée was popularised during the 1980s by chef Paul Bocuse, and has been a hit in French restaurants ever since.

Through much trial and error, I managed to learn that the French version of crème brûlée is best cooked in the oven at a very low temperature of around 100°C. After all, crème brûlée is a kind of custard, so if the internal temperature manages to get anywhere near that high, you’ll make it curdle. Trust me, on my second attempt, I did! You see, my French oven is powered by gas, and it has only two possible temperatures: a minimum of 160°C, and a maximum which exceeds that of a kiln.

Trying to navigate this French eccentricity, I discovered a further point of discord among recipes: to bain-marie or not to bain-marie. In my case, achieving such a low temperature could only be possible by putting the custard-filled ramequins in a tray of water. As my learned friend Duncan explained to me, the water surrounding the ramequins boils at 100°C. Any hotter and it turns into steam, so the submerged walls of the ramequins (and therefore the edges of the custard) can’t get any hotter than the temperature of the surrounding water. This turned out to be a key factor in getting the custard to set without it curdling. It takes an eternity in the oven, but it seems to work.

A further hint I found on the internet was using a small amount of egg white. This suggestion tends to make waves among purists, who claim that only the yolks should be used, but it doesn’t hurt and it also appears to help the custard to set.

Now that I had finally managed to make palatable crème, I had to “brûler” (burn) them. When making crème brûlée, it really is worth doing the burnt sugar at the last minute, just before you serve them, because the contrast between the chilled custard and the hot, crispy layer of sugar is what makes it so delicious. Nowadays in most restaurants in Paris, chefs tend to use a gas torch, and incinerate a thin layer of sugar sprinkled across the surface of the chilled custard. I had no such torch to begin with, and somewhat precariously held the custards on their side over the flame of one of my gas stove burners. Miraculously, the custard never ended up sliding out of the ramequin and onto the stovetop, but I knew that disaster was nigh and this makeshift solution would never do in the long run.

That was when I discovered the crème brûlée iron (fer à brûler or fer à caraméliser in French) – a round metal disc with a long handle on it, which you heat over the flame. When the metal is searingly hot and about to turn red, you brand the custard with the iron, burning the sugar and turning it to a delicately thin, crisp layer of caramel. This is apparently the way crèmes brûlées were originally made, and it’s loads of fun to do. The smoke generated by this method, however, is a little worrying for the neighbours, who at this point were looking across the street and into my kitchen to make sure I hadn’t started a fire!

1. Preheat the oven at 100°C if possible, or at its lowest temperature if not.
2. Slowly heat the cream and the vanilla together in a saucepan until it reaches a simmer.
3. In a separate, large bowl, whisk together the egg yolks and the white sugar.
4. While the cream is still hot, gradually pour it into the egg and sugar mixture, whisking all the while.
5. Let the mixture stand so that the bubbles that formed from the whisking break. It depends how much you whisked, but leave it at least 30 min.
6. Once the mixture has settled, pour equal amounts into each crème brûlée dish.
7. Place the filled dishes in a bain-marie (use a large oven tray placed in the oven) and fill the tray with water so that the tops of the crème dishes are slightly above the level of the water.
8. Cook the crèmes in the bain-marie (in the oven) for 60-90 min, until they are just set (the middle may still seem runny). Remove them from the oven and cool on the benchtop before placing them in the refrigerator for long enough to chill.
9. While the crèmes are still cold, sprinkle with the sugar and caramelise using the heated crème brûlée iron, a blow torch, or under the grill. 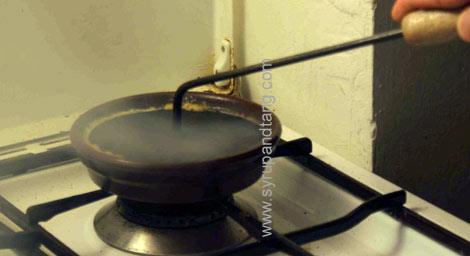 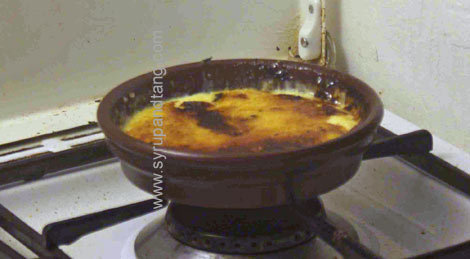 Thanks for reading!
HARRY DE PARIS