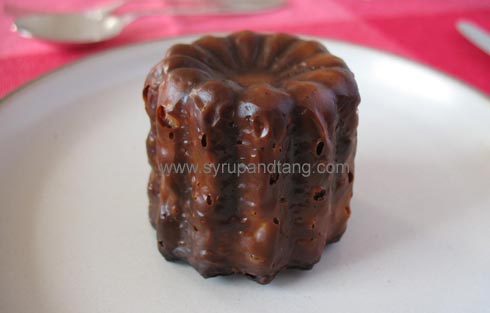 I feel myself drawn inexorably to baking projects that have no end, just a rocky path of discoveries, flops, experiments, successes, flops… Not content with macarons and pastéis de nata to add girth and grey hairs to my existence, I started playing with canelés de Bordeaux about a year ago. Why? Why? The lure of something that absolutely required expensive copper moulds and beeswax must have clinched the deal. I let on to readers that I had embarked on another of my baking odysseys back in March, but delivering the goods has taken far too long. It would have been quicker if every batch didn’t require advance preparation and considerable time in the oven. At least I’m not alone, for everyone from Clotilde at Chocolate & Zucchini to the talented Julia at Melanger has had the bug, as have many people on eGullet.

Canelés are fluted cakes made of a very simple rum-flavoured batter. Copper moulds are “greased” with beeswax and filled almost to the top. The desired result is soft, almost gooey on the inside (some people say “custardy”) and a shade of rich brown on the outside — preferences range from prettily golden to charred black, though dark brown is the traditional preference.

Please remember that this material is copyright. If you want to use (including translations) any part of it (beyond a very short quote), please contact me for permission.

The name canelé has often been spelled cannelé, but was codified with one N only a few decades ago. The genuine article from the Bordeaux region is designated canelé de Bordeaux, while in other places canelé, canelé bordelais or even just bordelais (plural: canelés bordelaises) are used. (I see no reason to assign two Ns to the non-local version, and it’s possible that version is the perpetuation of a typo from somewhere.)

The frustration of these strange objects is in the moulds and the cooking. It’s easy to cook something that can be as brown as you like, right? Cool! It’s easy to grease a mould so something doesn’t stick, right? Yes. But what if the question is how much something should not stick, or how to stop your batter rising a few centimetres out of the mould, or how to avoid ugly air-pockets inside? Hmmm?

Or one could wonder why some recipes insist on freezer-cold moulds while others don’t. Why some want the canelés baked on the bottom shelf of a convection oven, or not. Why some place freezing moulds on oven-hot trays, or why some add hot milk to the other ingredients while others wait until the milk is cold… the list of contradictions goes on, and despite the wearyingly long thread on eGullet, most of the crucial parameters go unexplained. So let me summarise what I seem to have found out.

This recipe is an adaptation of the highly respected Paula Wolfert recipe (worth reading too!). I’ve metricated it, tweaked slightly and added some more technical explanation.

Makes 10 canelés in 55mm diameter moulds. Prepare at least one day in advance.

Bring milk to just below boiling (avoid boiling it) and then remove from the heat. Add a third of a vanilla bean, sliced lengthways along one edge to release the seeds into the milk. Stir.

In a food processor, throughly mix together flour and butter, then add sugar, egg yolks, rum and salt. Remove the vanilla bean from the hot milk and gradually add the milk to the batter. Strain, and then store the finished batter in the fridge for at least 24 hours.

Please remember that this material is copyright. If you want to use (including translations) any part of it (beyond a very short quote), please contact me for permission.

On the day of baking you should prepare the moulds at least an hour in advance, preferably longer:

Metal moulds: heat the moulds in the oven. While doing this, place a small glass jar or a cupped piece of aluminium foil in about 2 cm water in a saucepan. Place some beeswax and a little neutral-tasting vegetable oil in the glass/foil container. Bring the water to a gentle simmer. The wax will melt very slowly. When melted, mix together the wax and oil using a pastry brush (preferably silicone — easier to clean). This mixture is commonly called “white oil”. (For a more detailed description, see the Wolfert article linked to above.)

Brush the insides of the very hot moulds thoroughly with the white oil, then invert them on a layer of paper towel placed on a cooling rack. Place a few layers of paper towel on an oven tray, transfer the metal moulds to the paper on the oven tray and put this in the oven for five minutes to let excess wax drain off. Remove the tray and tip the moulds a little to help final run-off. When the moulds are cool, place them in the freezer for at least an hour.

Silicone moulds: you can’t successfully wax these because of temperature and adhesion problems. Instead, butter the moulds (and only every second one — see why a few paragraphs down), making sure there’s a good layer of butter on the walls near the top of each mould (otherwise, the batter tends to stick during cooking, resulting in a ballooning of batter as it tries to rise, rather than a flat “shelf” of batter rising out of the mould). Place in the freezer for at least an hour. 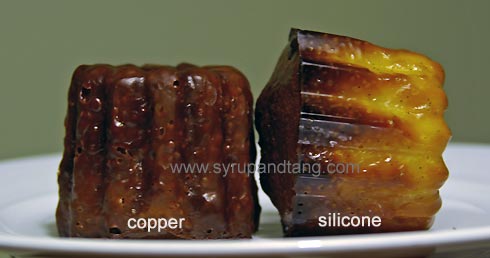 Why freeze? It seems that the batter sticks a bit to the walls if the lubricant melts too quickly before the batter has formed an outer skin. As beeswax is solid until quite a high temperature, it helps prevent this sticking, even more so if in a frozen mould. Although silicone moulds are non-stick, they nonetheless aren’t adequately slippery without being buttered.

As mentioned earlier, it seems that a key step is to bake the tray of moulds over a strong heat source. So, for instance, if you have a lot of heat at the bottom of your oven (common for ovens with a concealed gas ring below), you place the tray on the bottom shelf. But if, like me, you have an old-fashioned oven with the gas flame at the back of the base, the heat rises up the back to make the top of the oven the hottest place. Not good. After much experimentation, I put a pizza stone in the centre of the oven, and heated my tray before placing the moulds on it and filling them. Result: perfection.

Moulds need to be filled with cold batter (stir well before pouring) up to about 2-3 mm below the rim of the mould. Metal moulds can be filled and then transferred to the hot tray (keep them quite spaced out), but silicone moulds are too unstable, so must be put on the tray and then quickly filled, leaving every second mould empty (silicone is a poor conductor of heat so you need good circulation of hot air). 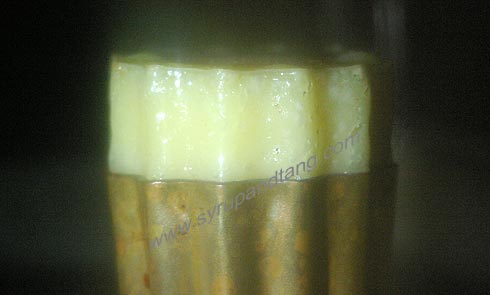 Inadequate bottom heat seems to cause a sometimes massive rise out of the mould. The batter then bulges slightly and won’t sink back, yielding big bulbous burnt bottoms.

Cooking at 200C, conventional oven (ie, no fan), the batter should develop a slight fringe at 10-15 mins with the surface shimmering, by 20-30 mins it should be rising and rapidly protruding from the moulds, and at 45 mins it will have subsided and be about level with the rim of the mould. I like my canelés to be deep brown, with a strong odour of caramelisation wafting from the oven. It takes my oven about 1h15m to achieve this for the copper moulds and about 1h30m for silicone (by which time the top surface of the batter is charring badly — cover with foil earlier).

Your timing will depend on oven, moulds and personal preference. If you have a convection oven, I suggest dropping the temperature by 10-20C, but making sure the tray is close to the heat source (if at the bottom) or placed on a pizza stone.

The batter at the bottom of a silicone mould is very slow to brown, and the canelés as a whole tend to be more fragile, requiring a little resting time in the mould before removal. In contrast, canelés in copper moulds should be crisp straight from the mould, and fairly easy to get out (at worst, a decent whack on a benchtop should do it). Note that copper moulds stay hot for a very long time, and are very difficult to handle (I think rubber tongs or a slightly dampened tea towel would probably be best -if your towel is too damp you risk steam burns). 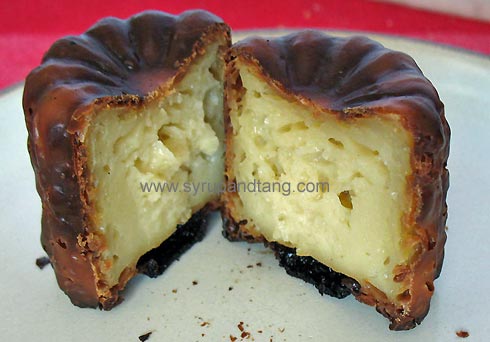 The ideal internal texture is soft, almost custardy, with a sort of open-crumb appearance like a loaf of bread, or sometimes described as a honeycomb pattern.

Canelés are best enjoyed still slightly warm, and certainly fresh (within a few hours of production). They go well with a dessert wine or strong coffee (as Wolfert also suggests), but they don’t really need any accompaniment. When no longer fresh, it’s best to refresh the canelés in a hot oven for a few minutes, then let them cool and crisp a little.

Finally, about those copper moulds… Although I’m all in favour of modern materials, the copper moulds really do produce a great product (and they’re soooo stylish;) ). I haven’t used aluminium ones. Silicone moulds are just trickier for a few reasons, but are an acceptable compromise if you see stars at the thought of coughing up the price of multiple copper ones (and I assure you, I’d love to have more than the paltry two I already own, but life goes on!).

Merry Christmas to all my readers!

37 thoughts on “Canelés de Bordeaux (or: my love of copper moulds)”