For a few years of this decade, there was an outrageously stylish café located in the women’s fashion section of the Bon Marché department store in Paris. It was called Délicabar and the fellow in charge was pâtissier Sébastien Gaudard. I first visited it about six months after it opened, and loved the sweeping hot pink banquettes, the stark white counter, and the innovative and delicious cakes and other creations. 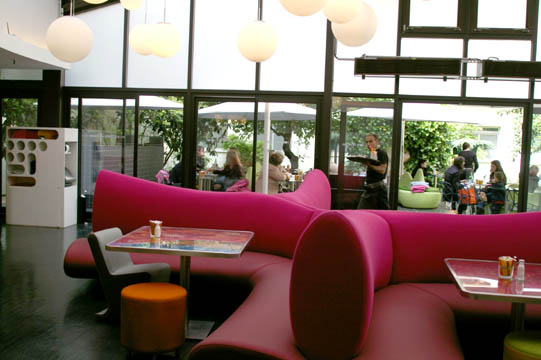 In 2006, three years after opening the café, a book by Gaudard hit the shelves: Sébastien Gaudard : Agitateur de goût. It looks very much like a vanity work, with the rather handsome Gaudard visage and his very blue eyes staring out at you from the cover. Inside there are many, many photos of Gaudard-with-little-dog shopping together, laughing with friends, and sometimes Gaudard by himself cooking with his team or staring meaningfully at a computer screen. But alongside all this are a wide range of recipes for some pretty delicious treats.

Alas, Gaudard and Délicabar shut up shop in November 2008, and that was that. The café space now contains some Italianesque lunchery, and Gaudard’s website is devoid of content.

Among the hits at Délicabar was the range of exquisite sablés (shortbreads), such as hazelnut, rosemary, or olive oil. Gaudard’s book reproduces some items familiar from the old menu, plus other interesting dishes. I’ve found the recipes less than reliable, but the inspiration is there.

I loved the sound of the sablés noisette à la fleur de sel (hazelnut shortbreads with fleur de sel). They are an utter bugger to make. The final result, however, is something close to nutly heaven.

The problem is that the crumbly mixture doesn’t readily adhere to the non-stick surface of a hazelnut. Moistening the surface doesn’t help. Below is the recipe, slightly modified in the hope of making them marginally less difficult to put together. If you find a further tweak that makes things easier, do tell.

This makes about 90 balls.

Preheat the oven to 150C and then roast the nuts on a tray for about 20mins until well coloured. Take care not to burn them (the skins will blacken; it’s the nuts themselves I’m worried about).

Reserve another 40 g of the hazelnuts with their skins – (B)

Remove the skins of the remaining 100 g of hazelnuts by rubbing the nuts between your hands or in a tea-towel. – (C)

Allow the nuts to cool completely before proceeding.

Grind hazelnuts (A) to a powder. Take care not to work them too much (or two fast) or you’ll end up with an oily paste. Not a disaster, but a bit messier.

Crush hazelnuts (B) to small pieces.

Mix butter, sugar, hazelnuts (A) and flour together. Add hazelnuts (B) and salt to taste (the mixture is quite sweet but should have the tingle of hidden salt crystals). The final texture of the mixture should be a bit like a pâte sablée (crumbly shortcrust pastry). It won’t hold together well. Chill for about an hour.

Make small balls of the sablé with a whole hazelnut (C) in the centre. This isn’t easy, as the mixture doesn’t like to hold together. I find cupping my hand and applying a lot of pressure to the mixture helps keep it firm enough while encasing a hazelnut. You might also like to try scooping up some of the mixture in a measuring teaspoon, pressing a hazelnut into it, then packing more mixture on top and then knocking the whole thing into your hand for a final squeeze. I promise frustration and occasional despair, and perhaps a little boredom.

Place the balls on baking paper on a tray. Bake the whole batch for 10-15mins, until they’ve developed a little colour. 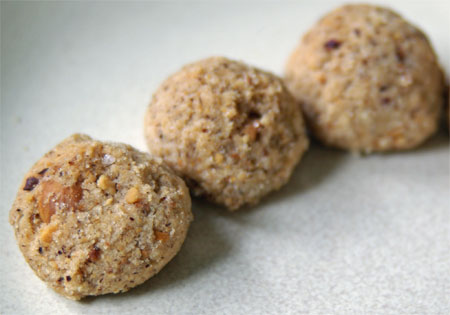 They keep very well in a sealed container (assuming you and everyone around you don’t gobble them up in an instant).

This article was prompted by the loud moans of pleasure from Hannah, Kaye and Kelly (assisted by milder expressions of delight from a number of other lovely people).

6 thoughts on “Wrap hazelnut shortbread around a whole hazelnut. Swoon.”