At some point I’m going to have to stop saying oh-my-god another-month-has-passed! But it seems only days ago that I was munching on éclairs. Lo! today it’s time for lavash crackers, thanks to the Daring Bakers. No buttercream. No ganache. No calories (almost).

I can’t profess an enthusiasm for dry, crunchy bready things. I compulsively munch on those revolting bar-pretzel icky things. I gulp down fish shapes (odd nominally-fish-flavoured weird things in Australia) even though I’m pescaphobic. But I don’t make these crunchy things. Nup.

So, with some reluctance, I stood by my commitment to the Daring Bakers project and did the thang. Really simple. Let’s do it again! LOL. Seriously, they were a breeze (I think it’s the lack of buttercream, ganache, etc etc… maybe I should concentrate on savoury baking 😉 ). 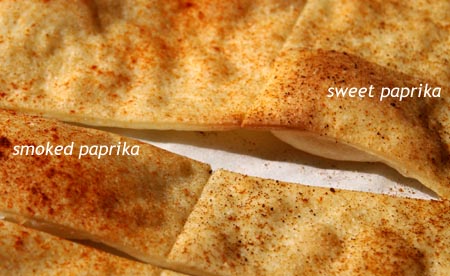 Lavash crackers are made with a thinly rolled yeast dough. A touch of honey lends this lavash recipe a delightful fragrant sweetness. You can decorate them with seeds, spices or other pretty thingies.

The recipe used was from Peter Reinhart’s great book The Breadbaker’s Apprentice, but you’ll also find it over at Lemonpi or on the challenge initiator’s site Musings From The Fishbowl.

Lavash doesn’t have to be dry. In fact, although most Australians probably know it as crunchy stuff, the Wikipedia entry (see link in first para) would indicate it’s primarily used as a soft flatbread (which would suit me just fine 🙂 ). 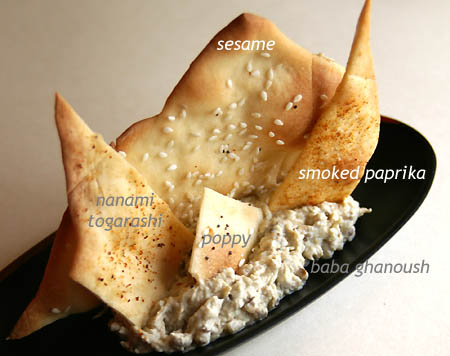 The bakers were required to serve up the lavash with a vegan, gluten-free dip of some sort. As I’ve previously described my love of baba ghanoush, despite my antipathy to eggplant, I thought it was an ideal companion to my newly-loved crackers. My baba ghanoush is just the flesh of a large grilled eggplant, mashed with a clove of garlic, salt, juice of a lemon and 60ml of tahina.

A quick tip about crackers: if you don’t want them crunchy, these are actually delightful slightly underbrowned — but the residual moisture will make them a bit leathery within a day or two, so they are best eaten fresh.