Eggplant does not play a part in my life. I do not understand eggplant. I hate the smell of it cooking. The texture is dodgy too. ‘Let’s have an eggplant curry, Duncan!’ my friends cry. ‘No! Anything but that!’ pleads your mild-mannered writer.

But there is an exception. I can eat cupfuls of baba ghanoush. That’s right. A slimy mush of eggplant, garlic, lemon and tahini is my idea of heaven. As with many outstandingly tasty dishes (and far too many unequivocally foul ones), baba ganoush is a dip with a million recipes, each someone’s absolute favourite. Mine is adapted from Claudia Roden’s A New Book of Middle Eastern Food (1986, Penguin).

For one large eggplant (or about three slender Lebanese ones), you need one modest clove of garlic, 3/4 tsp salt, the juice of one large lemon, and 60 ml of tahini. None of these amounts are law — vary at will. This amount is sufficient for a romantic night for two of garlic-breathing bliss. 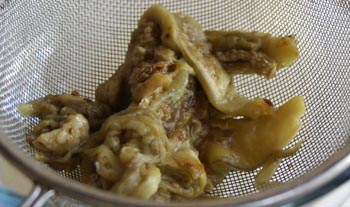 Is it a monster from the deep? 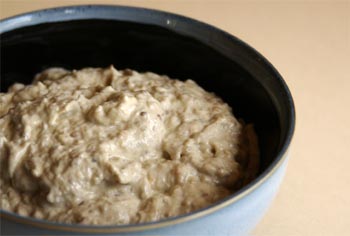 Does my breath look bad in this?