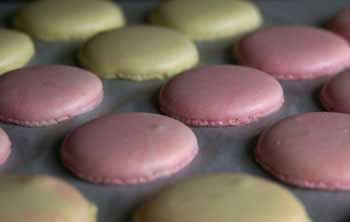 So you want to make better macarons? Welcome to the third instalment of La Macaronicité at Syrup & Tang! If you missed the introduction, click here to read it. And if you want to learn about basic technique, ingredients and method, visit the second article.

There’s a lot of information here and it’s possible that not everything applies to your kitchen or experience. I don’t know everything about them (there’s a limit to how many kilos of almond meal a poor writer can buy!). I welcome feedback about other solutions/explanations/ideas, but please don’t submit comments listing other recipes unless it contributes to a better understanding of the actual process and problems. You’re welcome to contact me directly if you prefer and I’ll incorporate helpful info into the article where appropriate.

To summarise the more detailed ingredient information from the previous article, the macaron batter consists of only four ingredients:

On occasion you might also see mention of cream of tartar or salt, both of which strengthen egg white foam.

The batter may be coloured (very common) and flavoured (less common, though not too difficult).

There are three types of recipe:

The important differences in this style of macaron recipe are as follows:

Meringue: This recipe uses a so-called Italian meringue, made with a hot sugar syrup which is beaten into the whipped egg white. 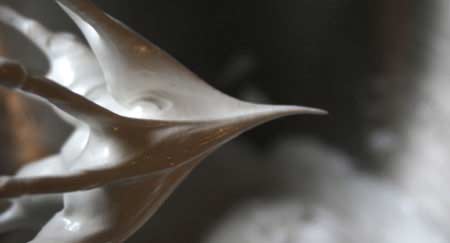 Mixing: As with the simpler recipe, at first the ingredients won’t mix together well. The Italian meringue is slower to pick up the dry ingredients and needs a bit more mixing to achieve a smooth batter. If you find you have lumps of powder in the batter, don’t be scared to smear the batter against the side of the bowl with the spatula. The final batter looks fluffier (some visible bubbles) than for the simple recipe. If the batter sits for any length of time the aeration becomes more apparent. That’s fine. This batter seems a little more tolerant of overmixing. This mixture dries out much more quickly than the simple one, but also remains usable for longer. Just cover the bowl with plastic film until you need it (e.g., if you’re baking multiple batches).

Crusting: I experimented with leaving some macarons to crust for an hour. The surface was actually almost hard after this time! Popped them in the oven and they rose happily, though some air bubbles made the surface irregular. The most striking difference between crusted and uncrusted macarons is that the former have a clearly defined line between the shell and the foot. On the downside, the shell was thicker than desirable. [UPDATE: after more testing, I now recommend permitting the shells to sit for half an hour or so. It helps reduce some problems if your oven has strong heat below the baking tray.]

Sugar syrup: The syrup is made by simmering off moisture until you achieve a certain sugar concentration, which is judged by its temperature. If only making a small quantity of syrup (e.g. for the recipe example quantity below), it’s best to use a small narrow saucepan or even a Turkish coffee pot.

Hot sugar syrup can cause bad burns, so be careful of splashing and don’t feel tempted to stick your finger in it! You need a digital thermometer or sugar thermometer to check the temperature. (Actually, you can check it using the old-fashioned drop test into cold water, but for that I suggest you check out one of your cookbooks — look up ‘firm ball’ stage.) Syrups harden quickly as they cool, so you need to have your equipment and ingredients ready to go.

Oven: Being slightly less touchy, this recipe doesn’t require changing temperatures and leaving the oven door ajar. You should be able to cook the shells at one temperature with the door closed. In general, you’ll lose fewer shells to burning or sticking if you use your first attempt to work out the best temperature for your oven — just cook a few macarons at a time at different temps (or trust me, LOL).

In testing, I found that at 150C the shells came off the paper beautifully, had good feet, but had air pockets. At 160C air pockets were absent, but the bottoms were just a bit sticky. At 170C the feet were more modest (still good) but the bottoms were sometimes too sticky. Permitting the shells to crust before baking gave a good rise (feet) and fairly dry bottoms, but a duller shell.

This is what happens with batter at different levels of mixing when cooked at 150C.

Be brave and face the batter!

This method is rarely found on the English-speaking internet and is only mentioned in a small number of professional cookbooks. It is fairly reliable, though still requires some practice.

Decide how many eggs you want to sacrifice. Crack and separate the eggs, remembering to keep the whites and all vessels and implements scrupulously free of fat or egg yolk. You don’t need to weigh the egg whites at this point. One egg white will yield about fourteen 3-4 cm macaron shells.

It isn’t necessary to age the eggs (though probably doesn’t hurt).

When you’re ready to start cooking, weigh the egg whites and then scale the recipe appropriately. The formula is below.

‘eggwhite’ refers to the weight of the egg whites in grams. The righthand column provides an example calculation. 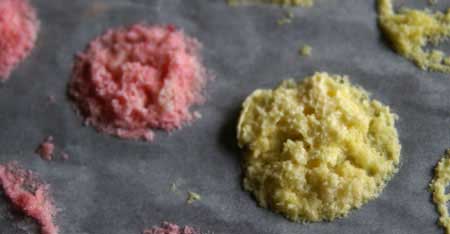 Very sticky macarons leave their bellies behind 🙁 Don’t try to peel the macarons off. Just put the paper with stuck macarons on a rack for a few hours and then peel carefully.

Background to my recipe

There’s only really one formula for the Italian meringue style of macaron recipe, as illustrated here. Alain Ducasse (in his Grand Livre de Cuisine: Alain Ducasse’s Desserts and Pastries) is approximately 1.4:1.4:1.0:1.4 (almond:icing sugar:egg white:sugar). My favourite book, by Christophe Felder (Les Macarons de Christophe), uses a ratio of 1.33:1.33:1.0:1.33. I’ve used both successfully, but settled for a compromise of 1.35:1.0. I don’t know how much impact these minor variations will have in your kitchen.

If you have any doubt about the preferability of the Italian meringue approach, read what talented Joycelyn at the beautiful Kuidaore site has to say, or see what Kitchen Wench has written about her macaron adventures.

For troubleshooting and additional info on technique, remember to read the previous article.

I’ll leave everyone who is so inclined to play with their delicious divas over the weekend. Next week I’ll write about fillings and flavours, amongst other things.

My piping gun has cracked, my piping bag is torn, and I have fourteen neglected egg yolks in the fridge, clamouring for use! 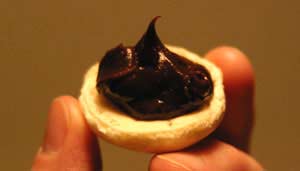 145 thoughts on “La Macaronicité 3: the more reliable macaron recipe and a few tips”